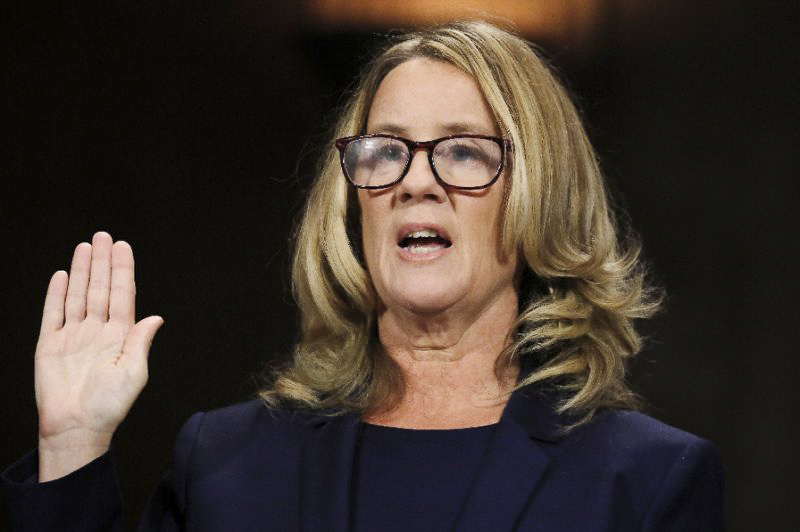 Held as a safe space for students to express themselves, the event was organized by Adolescent Sexual Health Awareness (ASHA), Students for Consent and Communication (SFCC), the Wesleyan Student Assembly (WSA), the Title IX Student Advisory Committee, the Survivor Advocacy and Community Education (SACE) Office, the Office of Religious and Spiritual Life, and Counseling and Psychological Services (CAPS).

Rev. Tracy Mehr-Muska and Rabbi David Leipziger Teva led a group discussion with the 20 students who attended the event, which came five days after Ford spoke in front of the Senate Judiciary Committee about Kavanaugh assaulting her while the two were in high school.

In planning the event, WSA president Emma Austin ’19 first brought up the idea of having a reflective gathering to the Department of Student Affairs and connected with Director of SACE Johanna DeBari to coordinate the details. The organizers believed it was important to address the needs of students who were particularly affected by the hearings.

“We don’t exist in a vacuum, so things that are happening in the world inherently affect our lives on campus,” Austin said. “Especially when we’re dealing with survivors and accounts of sexual assault, it’s important to acknowledge that these things can be triggering to people, not just to people who are survivors but to people who have survivors in their lives, who feel empathetic for other people.”

DeBari believes that giving survivors a space to vent and have control over the discussion was an important way to address the resurfacing of trauma provoked by the hearings.

“The nature of what the dynamics of interpersonal violence look like is that they are isolating experiences,” DeBari said. “They are incidences where people have taken power and control away from someone else, so building community and sharing space and saying, ‘We’d like to give you a chance to have power and agency over how you’re talking about and validating how you’re feeling,’ feels particularly important.”

Attendees talked about how the hearings were affecting their daily lives and about the lack of support they’ve noticed from some of their professors and certain friends. One attendee, Rachel*, wished professors would acknowledge that the hearings were occurring and that they might be affecting a large number of their students. She spoke to the importance of talking to other survivors who were experiencing the same emotions she was.

“A lot of people who attended were very angry at the people in their lives who seemed to be ignoring this,” Rachel said. “To have a space where that sort of anger at the system and what’s going on and people who are kind of complicit in letting this happen was acceptable…. It’s hard to find a place to express that.”

Many attendees also expressed frustration at how some of their left-leaning friends viewed Ford and others’ testimonies as merely beneficial in the political sphere, without acknowledging the effects the testimonies have on survivors or the fact that survivors coming forward now had been holding onto their trauma for decades.

“It felt very nice to be around people who were in a similar position, who were not going to try to intellectualize or try to minimize how we’re feeling about the events,” Rachel said. “One thing I expressed happened and other people expressed happened was that people around them were treating what’s going on from a very objective political standpoint, especially from leftist men who were like, ‘This is just another piece in this larger political chess game.’”

*Name has been changed to protect the speaker’s anonymity.