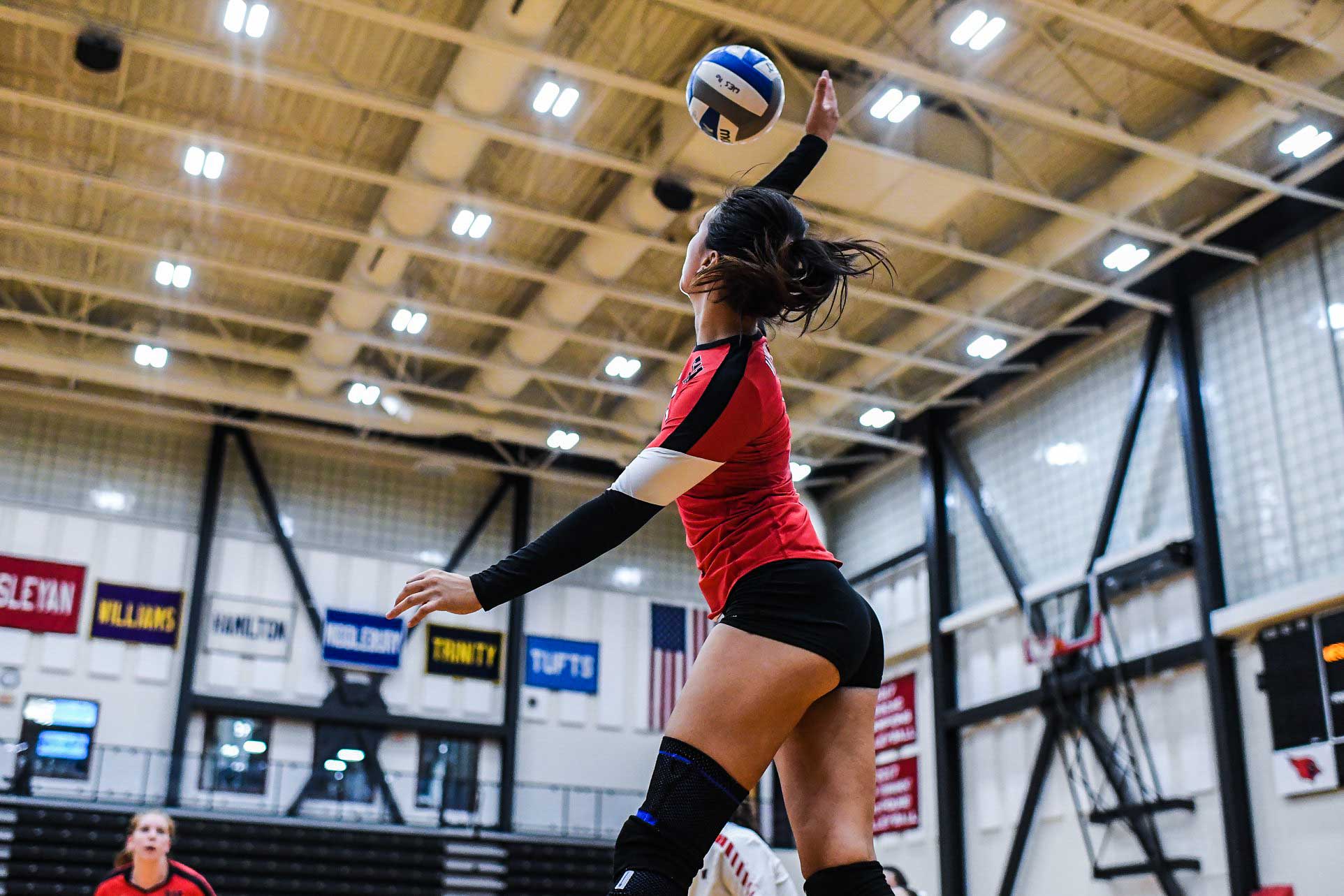 It’s a streak! Last weekend, volleyball extended their winning streak to seven games. Their record is now an impressive 7-1, coming from a string of three more wins over the weekend. On Thursday night, the Cardinals beat Connecticut College in five tough sets, winning 25-23, 21-25, 25-18, 22-25, and 15-6. The Cards totaled 58 kills across the five sets, along with 90 digs. Harper Graves ’21 and Stasie Litinsky ’20 each had a team high nine kills in the victory, while Phia Bellizzi ’21 had a team high 24 digs.

The Cardinals then took on Roger Williams University, the program which Wesleyan head coach Ben Somera had previously led for three highly successful seasons. The Cards won easily in three sets, 25-17, 25-22, 25-11. Against Roger Williams, the team totaled 36 kills with 58 digs. Once again, Litinsky led the team in kills and Bellizzi in digs.

The Cards then capped off a dominant weekend, winning over Scranton University in four sets 22-25, 25-15. 25-16, 25-17. The team totaled 41 kills with 69 digs. In an impressive performance, Maddie Kurke ’22 and Mia Hogan ’20 both posted double-digit kills. On the defensive side, Bellizzi again led the digs category with 27.

Coach Ben Somera was pleased with how the Cards were able to come away victorious. However, he stressed that there is much room for improvements.

“We look good this weekend, but there is still a lot of work to be done,” Somera said. “We have stretches of play when everyone on the court is doing their system responsibilities, but we also have stretches where we beat ourselves. Our improvements from here on out are less about technical development and more about mental focus and being accountable to each other as a team. As we improve on that, our good stretches will lengthen, and we will have less bad stretches of play”.

Somera also added more about what he thinks have been the keys to his team’s success so far.

“The key to our high level of play throughout our winning streak has been the quality of our first contacts,” Somera said.“We serve pass and dig very well and that puts us in a great position to score.”

Captain Madeleine Lundberg ’19 agreed with the fact that they looked good all around this weekend.

“I think we played really well,” Lundberg said. “Playing three games in a row is never easy, but we handled it well and continued to execute even in our last game of the weekend.”

Lundberg believes that their sustained success in games is a direct reflection of their specific practice techniques.

“Playing hard in practice every day has been a huge key to success,” Lundberg said. “Pushing ourselves to play at our full potential even when not in a game-like setting has really set us up to be successful and to be able to stay mentally focused even during close games.”

This mental toughness was on full display in the match against Connecticut College when they battled back and persevered to win in five sets.

“Our key to the Connecticut College win was perseverance,” Somera said. “We weren’t completely engaged in the process that night and made a lot of silly errors. Mia Hogan ’20 gave us a big lift with her play and was a spark that we could rally around.”

Lundberg agreed that the Connecticut College game was a learning experience.

“I think we learned a lot from our game against Conn, and we were able to take those lessons into the weekend,” Lundberg said. “We’re excited to continue to progress as the season continues, and so we’re taking every game as a learning opportunity and a chance to improve.”

If you want to watch the Cards this week, the next game is a 7 p.m. matchup this Thursday at home against Westfield State University. Looking further ahead, the Red and Black play four games next weekend, including two NESCAC road battles versus Amherst and Trinity.