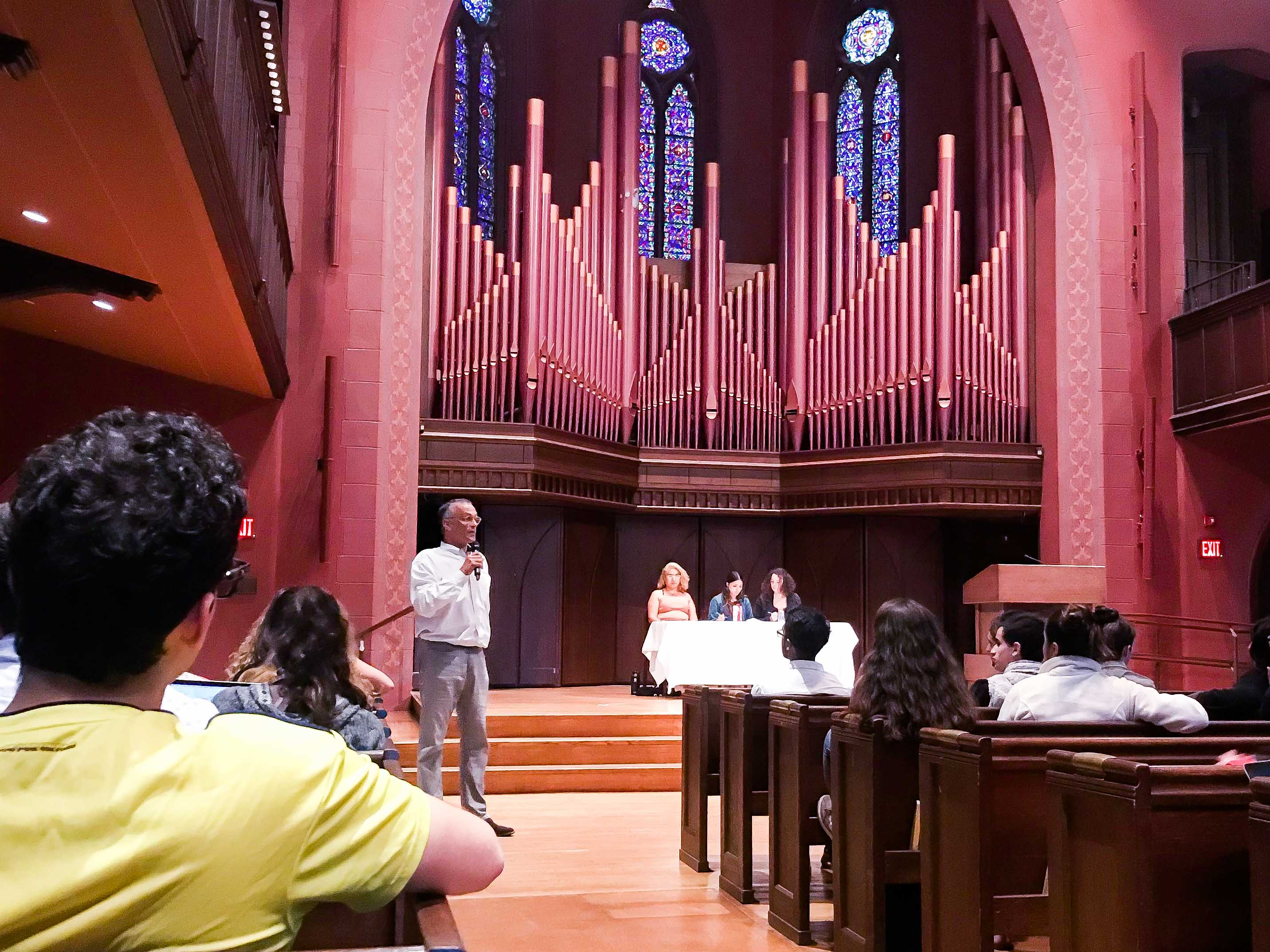 Roth began his introductory speech with an explanation of how the University approaches its planning. The three pillars of the approach are energizing the distinctive education that Wesleyan offers, increasing recognition of the University, and doing these first two items within a sustainable economic model. One of the ways in which the University is working to strengthen the education Wesleyan provides is decreasing the student-faculty ratio. The University also has facilities projects in the works that require additional fundraising.

Austin began the Q&A portion of the event by asking a question regarding the recent CAPS departures, and a follow-up question that asked if the University was planning on hiring more CAPS therapists to reduce its ratio of 400 students for every therapist down to around 150:1—the ratio that Amherst and Williams boast.

Roth replied by saying he was not sure why the therapists left, but Wesleyan has hired two replacements and is working on finding a third.

“I don’t know if we’ll get to the point where Williams is, but our goal is to be able to provide students with services immediately and keep wait times down,” Roth said.

De Beus then read a question asking if the University was aware that its sidewalks are noncompliant with both the American Disabilities Act of 1990 and the Rehabilitation Act of 1973, and asked what the University will do to make sure students with disabilities can have equal access to education.

On the topic of finances, De Beus read a follow-up question that asked how accessible budget information is to students. Currently, the categories in the budget are public but in broad categories like “real estate.”

Roth said Wesleyan students have representatives on the Board of Trustees that see the budgets as they’re drawn up, and if students had further questions they could ask him or anyone at the administration of financial services.

Nájera-Garcia then read a question that expressed concern about the lack of financial aid for Winter and Summer Sessions and asked how the University plans to better support students during these times.

Roth said this concern is a priority of Dean Mike Whaley, and Roth guessed that the University will look to providing meals for students in addition to housing, which is already provided.

Returning back to the discussion about facilities, Nájera-Garcia asked if there were any construction projects that would support student residences, to which Roth replied that the University is trying to determine what the trade-offs of delaying academic facility construction to focus on residences are.

Austin read another question asking if the University plans to expedite its initial plan of increasing the student minimum wage to $11 by 2021.

“I am convinced that we should raise it more quickly than announced,” Roth replied. “I have to work with a bunch of offices to figure out how to pay for that, but I think we’ll have an answer pretty soon.”

In response to this, Austin read a question that compared the rate of Roth’s recent compensation increase to the rate of the minimum wage increase.

“Your compensation rose $135,789 between 2013-2015,” Austin read. “This is clearly a sign that the Board of Trustees trusts you to lead this school and continue raising money for Wesleyan. Given this optimism about our future why should student wages increase by 9 percent over three years while your compensation increased by 18 percent from 2013 to 2015? What percentage do you think is fair to students?”

“Do I think that my wages have gone up more quickly than reasonable?” Roth said. “I don’t know that there is a reasonable standard for such things.”

De Beus shifted the topic of conversation to sustainability, reading a question that asked if Roth believed the University was adequately supporting sustainability initiatives on campus.

Roth replied saying that the University could do more, and while it has seen a significant decrease in energy consumption and a moderate decrease in reducing waste, it has had the least success in integrating issues around success into the curriculum.

As a follow-up question, De Beus asked why the University has chosen not to divest from fossil fuels but chose to ban bottled water on campus when divestment would have a greater impact on the environment than current sustainability measures.

“I don’t see there’s a tension between banning bottled water or using less energy and divesting from companies that use or sell fossil fuels,” Roth said. “I don’t think our divestment from fossil fuels would have any effect on global warming, but I do think changing the patterns of use and how we live can have an impact on global warming. Now it is true that divesting from fossil fuels is symbolic and that can resonate, but we’ve decided that we are going to use a filter for our investments that excludes companies that are engaging in illegal or unethical behavior. But we’re not divesting from an entire sector of the economy.”

Staying on the topic of environmental issues, De Beus asked another follow-up question about what the University is doing to transition away from fracked gas as the primary source of Wesleyan’s power.

The University, Roth replied, hasn’t found a suitable replacement for this type of energy, but it is still looking for substitutes.

Nájera-Garcia then read a question asking about the University’s admissions policy, which is not need-blind.

“Tuition costs have increased for the past few years, the endowment just recently hit $1 billion, and yet we are still not need-blind,” Nájera-Garcia said. “Do you expect that tuition will increase every year? When will Wesleyan feasibly be able to return to need-blind, why?

“My hope is to keep adding scholarships that are endowed so that they can’t be taken away,” Roth said. “I don’t use the phrase need-blind because when we were need-blind we had very high loans…so my goal is every year to increase the revenue that we give back to financial aid and eventually we could be need-blind.”

In the same vein, Nájera-Garcia asked about how Roth justifies investing in the recent rebranding project.

“I don’t think it was an expensive rebranding project, [and] I don’t think rebranding is the right phrase for it,” Roth said. “I think, the way we justify it, to go back to your questions, is that it’s important for the University to get its message out and add value to your diploma.”

Nájera-Garcia then asked how the University plans to address a hostile environment for low-income students.

“I’m not sure need-blind/not need-blind creates a hostile environment,” Roth said. “What’s really important is that we meet the full need of the students who are here, so that’s the key…. We have to take responsibility for services that people may need to thrive.”

Austin read a question asking about the new logo as a result of the University’s core messaging project.

“You just mentioned the core messaging project and it recently resulted in a new logo, and students as well as alumni overwhelmingly react negatively to this,” Austin said. “What do you see as its redeeming qualities and why the change?”

De Beus then read a question about student dissatisfaction with how the University plans to address the issue of severe lack of social spaces.

Roth explained that while the University was asked by the city of Middletown to prevent overcrowding of parties, he wanted to take suggestions from students about how they wish to use social spaces.

To follow up to Roth’s response, Nájera-Garcia asked if the trend of houses related to people of color being shut down earlier should be addressed. Roth replied that he was unaware of this issue and that he would address it immediately.

Austin then changed the subject to ask the steps the University took since the Victim Rights Law Center (VRLC) audited the school in 2017.

“They changed a large number of procedures in the adjudication of sexual assault cases,” Roth said.  “In regard to sexual assault, our work is never finished. We can always improve education on campus and to make sure that cases are handled with care and comfort.”

One suggestion the VRLC made was to implement restorative justice as an option in sexual assault cases, and Austin followed up by asking what the feasibility of implementing this system is.

“There is a group of students working on that now, and [Equity Compliance Director and Deputy Title IX Coordinator] Debbie Colucci and others and myself are very interested in this,” Roth said. “I don’t want it to be a burden on survivors, I want it to be an opportunity for those who seek it.”

Nájera-Garcia then asked about accommodations for Muslim students.

“What is the University doing to ensure that religious and spiritual students on campus feel comfortable asking for accommodations in class?” Nájera-Garcia asked. “When will there be a new Muslim chaplain and will their position be full-time? Why has the University still not formally accommodated meals for Muslim students by having ample daily Halal options, especially while there is a Kosher bar?”

Roth responded that he was unaware that there was a request for Halal meal options and that the University was searching for a part-time Muslim chaplain.

Austin then read a question regarding how the relationship between the student body and the administration has changed since Roth first became president and which issues have become less salient.

Roth replied that many of the broader issues were similar, while more specific issues have become more and less salient.

“I’m happy to be sometimes a target, sometimes an ally, sometimes an obstacle so that students can flex their political muscles and think about what they want and try to work together in groups to create a better community,” Roth said.