Who to Listen to on Any Given Sunday, NBC Edition 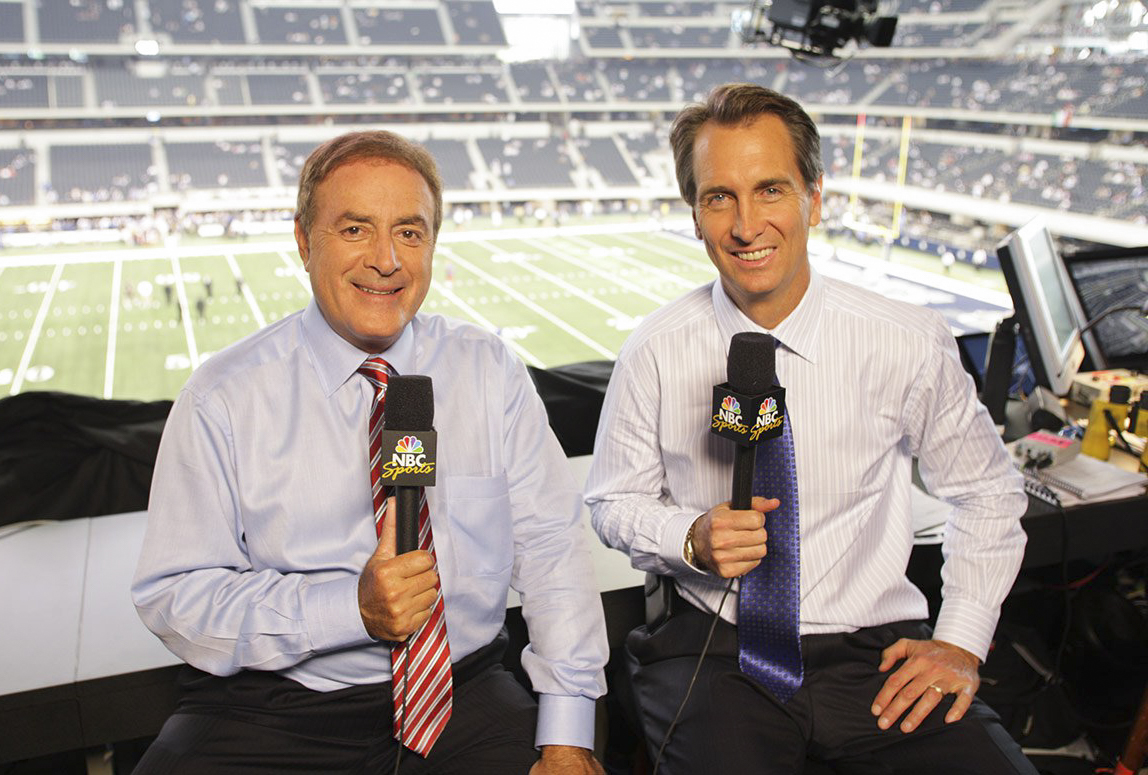 To the shock and chagrin of all Joe Buck lovers, last week, I ranked him and Aikman as the bottom pair of NFL commentators. Now, this ranking doesn’t include the likes of the robotic Ian Eagle and Dan Fouts or the commentator musical chairs that’s going on at ESPN’s Monday Night Football. Buck and Aikman are solid commentators, but they don’t come close to the quality of the main NBC and CBS pairs. I bet you’re thinking to yourself, who’s next on the list? Will it be the proven, dependable Cris Collinsworth and Al Michaels? Or will it be the new kid on the block, Tony Romo, and the “hello friends” Jim Nantz? Do you believe in Miracles? Yes! My second place pair is NBC’s Al Michaels and Cris Collinsworth.

Like last week, I’ll begin my analysis with Cris Collinsworth. My positives on Collinsworth shockingly outweigh the negatives. The group chat on my phone always explodes in anger when Collinsworth does something to criticize the Patriots. I personally don’t hate Cris Collinsworth. Unlike the other two former athletes in the CBS and Fox pair, Collinsworth wasn’t a quarterback; he was a wide receiver.

Quarterbacks have always been dubbed the smartest athletes on the football field. Rightfully so, they have to make pre-snap reads at all levels of the defense. They have to check the alignment of the defensive line to ensure that all gaps are properly filled; linebackers looking to blitz have to be checked to prevent a free rush; defensive backs’ shifts need to be understood to make a distinction between man or zone coverage. That’s all before the snap of the ball. The quarterback, furthermore, has to make sure that he has set up all parts of the offense in a way to make his team successful. For all those reasons, quarterbacks are normally put in the booth to accompany a man like Al Michaels.

Wide receivers don’t get the credit they deserve in regard to their intelligence. Jerry Rice and Steve Largent are two examples of incredible football knowledge, route running ability, and hands. Collinsworth, even though he’s no Largent or Rice, had to have intelligence to run his routes to perfection. If he didn’t run a great route, he wouldn’t be open. Collinsworth proved to be an effective receiver with three Pro Bowls and one All-Pro nod to his name. All in all, Collinsworth has the credentials and intelligence to be in the booth with Michaels. He also displays an excitement that Aikman can’t replicate.

When Russell Wilson was picked off by Malcolm Butler (as a Patriots fan I have to reference this) Cris Collinsworth vehemently criticized Pete Carroll and his coaching staff. Aikman would’ve probably stated, “well in this situation, you have to think about running the ball.” Collinsworth said no such thing: “I’m sorry, but I can’t believe the call. I CANNOT BELIEVE THE CALL. I can’t get over the call.” I love this about Collinsworth; he’s sometimes loud and in your face but in an intelligent way. He gets riled up, but everything he’s saying is normally accurate.

The one part about Collinsworth broadcasting ability that I don’t love is that he gets repetitive and hung up over specific details that the audience just doesn’t need to hear one more time. Of course, I’m referencing Brock Osweiler. Osweiler had a terrible run with the Broncos, but Collinsworth couldn’t get over how tall he is. He would prattle about how his height advantage would make him a great quarterback with his ability to see over the line. That annoyed me, as well as many fans across America. Collinsworth is a great commentator overall, but that one area of him not letting some ridiculous points go hurts him in my rankings.

Al Michaels, Collinsworth’s partner in crime, has the voice of an angel. I’m completely serious here; when Michaels commentates, my shoulders relax, my resting heart rate goes down, my doubts and fears subside. Michaels has been in the broadcasting game for decades, calling some incredible ones. The Miracle on Ice has to be his most famous moment. The excerpt I included above, “Do you believe in Miracles? Yes!” is one of the most quotable lines from any sports game, following closely behind by the line, “that’s a bold strategy, Cotton. Let’s see if it works out for him” from “Dodgeball”.

Kidding aside, Michaels is one of those announcers you want to have when your team is playing. This pair does have a slight advantage over the others in which they regularly have the Sunday night game. Even though some of the Sunday night matchups aren’t great, ending your weekend with football is something I have always loved. Through the years and many broadcasting partners, Michaels has gained an immense knowledge of football. Even though it’s not quite at the level of Aikman, Romo, or Collinsworth, it’s not his job to be the football expert. One of his defining qualities is his minimalist approach. We’re bombarded so much nowadays by commentary we don’t really need. Michaels lets the game speak for itself. I don’t really have a knock on Michaels, which goes to show you how much I enjoy Romo and Nantz. Tune in for next week’s edition of Martin’s NFL Commentator Rankings.

Andrew Martin can be reached akmartin@wesleyan.edu.