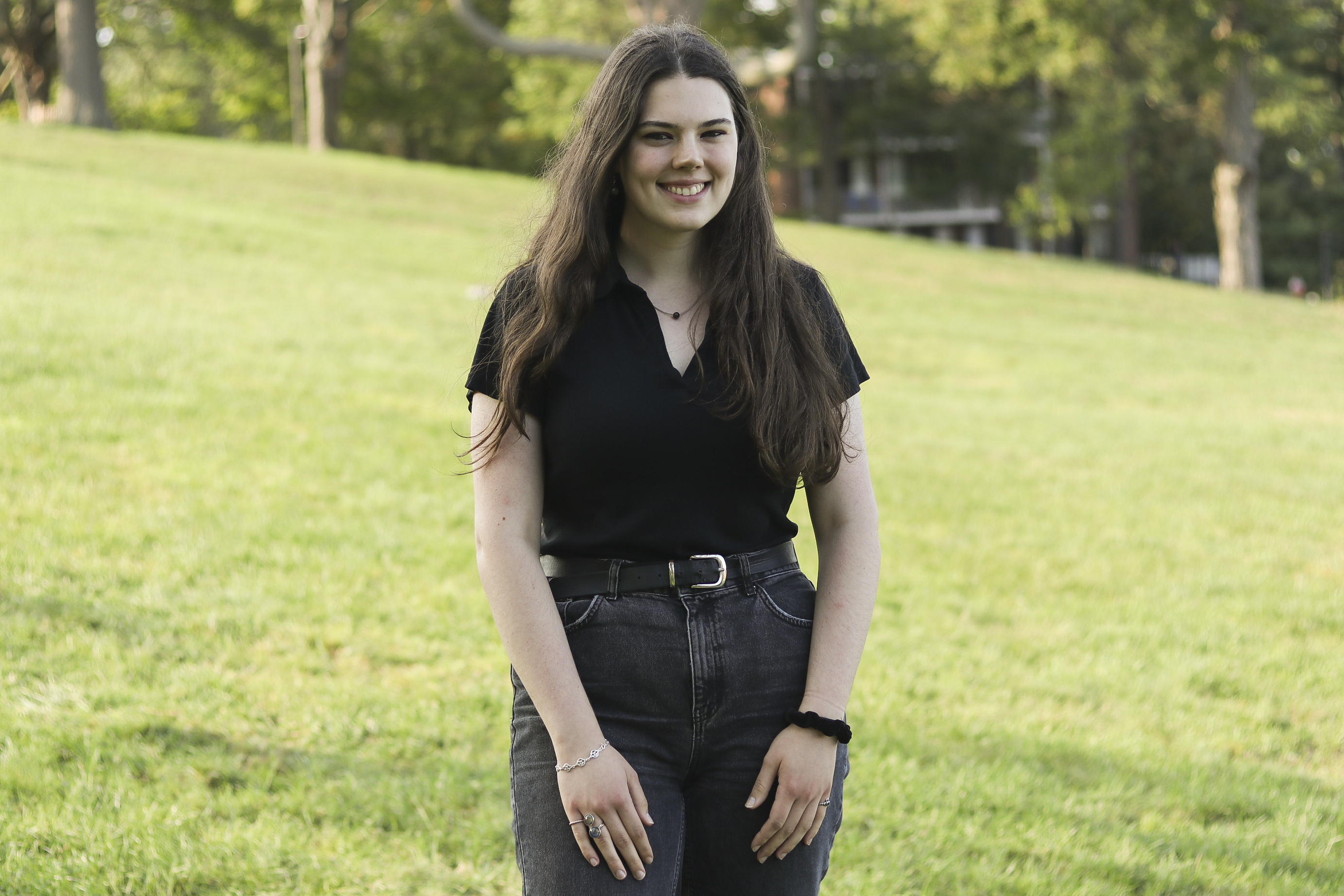 Aurora McGuckin ’19 may be the best known barista on campus. Working for both Espwesso and Red & Black Cafe, McGuckin still finds time to run Students for Consent and Communication, as well as DJ two WESU radio shows and attend every keg co-op. Although McGuckin’s schedule may indicate she’s in a perpetual coffee buzz, she claims to spend all her time watching TV. The Argus recently sat down with McGuckin for some coffee talk.

The Argus: How are you settling back into campus after your semester abroad?

Aurora McGuckin: Honestly, going abroad was great. It just made me appreciate Wesleyan more. I enjoyed being away, and then it felt really good to come back. I’m settling in pretty well—a lot of my friends were also abroad, and those who went abroad in the fall I really missed. It’s great to be back at Wes. I could go on and on about abroad.

A: How was being in Ireland? Was it that different from America?

AM: It’s not that different, but the first thing that people always ask about when they hear me speak is Trump. That being said, Irish people are really friendly in a way that is at first maybe off-putting. Americans, and New Yorkers especially, are not as friendly, but I was lucky that there was no language barrier or anything. I missed my meal plan.

A: Speaking of meal plan, you work for both Espwesso and Red & Black. Do you just really like coffee?

AM: It was just a ploy to get free coffee. I applied for both originally and got both, and I said I would try both out for a semester and eventually choose. It ended up that they’re really different, and I enjoy both so I didn’t give either up.

A: What’s one of the craziest things you’ve seen at Espwesso?

AM: Some people are really afraid to approach the counter and ask for a drink even though that’s what I’m here for. I try to be really approachable, but also at the same time I’ll go to say, “hi” and some people will just throw their IDs at you. Which doesn’t even bother me really, but I do find it funny that people can act like that. I have seen some full blown political debates break out and impromptu theater performances. I feel like Espwesso is a place where a lot of people feel comfortable and come together and feel at home there, at least I did and that’s why I wanted to work there. That’s what I hope people feel too.

A: Do you like the Espwesso jazz nights? Be honest.

AM: I have never sat through a full one. When I was younger, I would be like, “Ooh, a jazz night— I’m gonna go!” but I understand that working during that shift is probably a little bit trying, because it impacts the business and the space in different ways. I’m not anti-jazz night but I know in the past we’ve had staff who were super anti-jazz. This year I’m the Event Coordinator, so if anyone wants to talk to me, jazz night or no jazz night, they can.

A: What events have you been planning for Espwesso?

AM: Right now we’re trying to organize an art gallery with student submissions hopefully in the next month. We’re looking to use our space for more community gathering. I want to put more art up and see more collaboration. As much as I think Espwesso is a very welcoming space, if you don’t go there you may feel like it’s exclusive in some ways. As a freshman, I was intimidated but I started going and realized that it was really nice. Last year we had a really good slam open mic, and I’d like to have more of those.

A: Do you hear a lot of gossip at either of the cafes?

AM: I hear so much gossip. You’d think that because I work at both Espwesso and Red & Black, more people would know me, but I think I know so many more people because I swipe everyone’s IDs and I hear everyone’s gossip. I definitely hear too much.

A: I’ll keep that in mind next time I go.

AM: It is a little bit of a power trip.

A: What’s your opinion of the Red & Black playlist? Do you ever get to add your own songs?

AM: I don’t actually ever really add songs to it, which is a contrast to Espwesso where I control the music. Our manager, Rob [DeRosa], is a DJ at the radio station, so most of the playlist is from him. Sometimes I’ll come into my shift and just think, “Have we just been playing bangers all day?” I like that other people notice that because it’s a big highlight for me.

A: Favorite drink at Red & Black? At Espwesso?

AM: I am a black coffee drinker….

A: That’s kind of ironic for a barista.

A: I hear you had a restaurant job over the summer.

AM: I’ve worked in a restaurant for the past seven summers. I was basically managing it this summer. It’s a full service restaurant, so it’s different from Red and Black and Espwesso, but I really missed having that relationship with people. I do enjoy the customer service aspect although it’s pretty different here, working with and for other students. And also Espwesso is fully student-run, so we make our own schedules and manage ourselves, which is a really cool project.

A: Do you have any customer service horror stories?

AM: I have too many horror stories, but a nice thing is that I got to meet Nick Kroll this summer so that was really cool. I was also in charge of organizing catering for a music festival for Jack Johnson. I did not get to meet him, but he liked the food and ate it onstage. I felt really good about doing my job carefully and making things happen. That was really rewarding for me.

A: You’re also a member of Aural Wes. How do you pronounce Aural Wes?

AM: I just say Aural Wes.

A: You do a lot of work for [Wesleyan Students For Communication and Consent]. Tell me about what that means to you.

AM: I joined as a freshman with a few people who were in my First Year Seminar, which was Sex/Gender in Critical Perspective. We were so plucky and ready to get involved, and there were a few seniors who looked like they were 25. They were so welcoming, got us actively involved, mentored us, and made us feel smart and capable, so thenwhen they left we got to take over. I love SFCC and I’m really proud of the work we’ve done with “Take Back the Night.” We really want to prioritize survivors’ safety and healing. I hope that that is something we are accomplishing and continue to work toward. We just had our interest meeting so i’m super excited  about things to come. I want to continue to spread conversations about sexual assault in ways that are relevant and meaningful to us as Wesleyan students.

A: Do you have any upcoming events?

AM: We’re going to have an event for Intimate Partner Violence Awareness Month in October, so stay tuned for that.