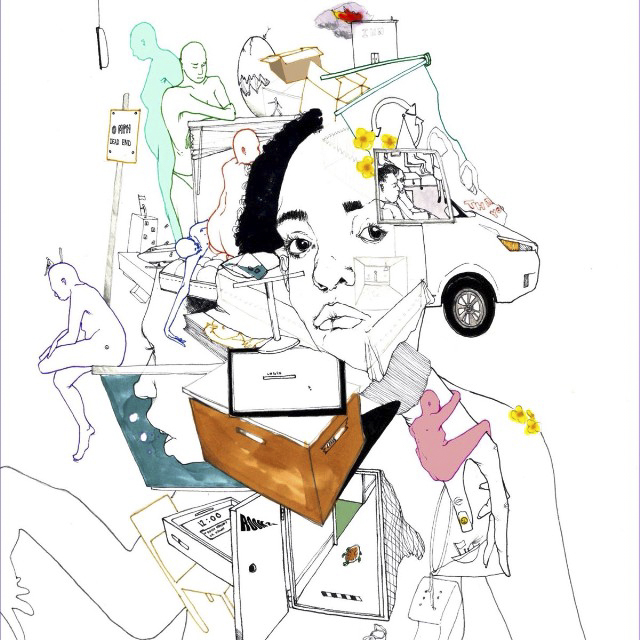 When she first stepped onto the scene in 2016, Chicago rapper Noname (born Fatimah Warner) made her outlook on fame clear in her very first lyric: “And I know, the money don’t really make me whole.” After years of vague hints about the release of her debut project, “Telefone,” originally slated for late 2013, Noname dropped her first mixtape almost out of the blue, without any press run or album countdown. Instead, listeners were introduced to her world via that casual, self-assured bar above, that concisely presents her artistic philosophy.

When I met Noname at a workshop in 2016, I asked her how she planned to maintain her privacy as she blew up. In her response, she referenced Frank Ocean and Andre 3000 to point out that people could be famous but also just people too. It’s telling that Noname referenced these reclusive artists who release records with almost no prior word and then retreat into their solitude, because with her new album Room 25, Noname joins their master class. Noname deserves to stand alongside solitary artists like D’Angelo, Frank Ocean, Andre 3000 and Fiona Apple, as a fellow visionary who drops spellbinding, personal records and declines the celebrity that comes along with such talent. Noname would probably add her longtime crush Jay Electronica to that list, but we may have to wait until he actually drops an album.

If “Telefone” marked Noname’s discreet entrance into conversations about the best rappers coming out of Chicago, Room 25 marks her effortless seizure of that throne. On opener “Self,” Noname lightheartedly parodies fellow MCs who might try to deny her rightful place as God(dess) MC, asking “And y’all still thought a bitch couldn’t rap huh? / Maybe this your answer for that.” Although she sarcastically critiques the myopic lyrics of these rappers, that only ever mention “money and good pussy,” Noname doesn’t come off as elitist or self-righteous, but rather sardonic and playful.

You can almost hear her laughing as she jokes “My pussy teaching ninth-grade English / my pussy wrote a thesis on colonialism,” amused by her own caustic wit.

This understated confidence follows her through the tape, appearing on other lyrical exercises like the posse-cut “Ace” and the Ravyn Lenae showcase “Montego Bae.” Showing up at the end of “Montego Bae” after a romantic verse from Lenae, Noname discusses her own sex-positive vision of romance, where head and Toni Morrison novels go hand in hand. Revising the one-sided sexual advances that male MCs often portray, Noname first discusses her own pleasure, rapping “I know he eat me like I’m wifey, he know my hotel over pricey,” before going on to say “‘Cause a bitch really bout her freedom, cause a bitch suckin dick in the new Adidas.” Noname flexes and fucks at the same time, and with the bars left-over, can still self-reflexively snicker “and yes, I’m problematic too.” Affirming Noname’s sexuality and stature while subtly critiquing folks who would decry her promiscuity, “Montego Bae” reflects the confident, yet conscious center of “Room 25.”

“Ace,” landing right after “Montego Bae” on the track listing, further communicates this message. Featuring fellow Chicago MCs Smino and Saba, “Ace” recalls the smooth funk of golden-age supergroups. Smino’s hook brings to mind the rose-tinted charms of John Legend, Common, and Kanye West’s “They Say,” (another Chicago posse cut featuring three legends in the making) while Noname’s cool delivery evokes Ladybug of the pioneering jazz rap trio Digable Planets. With each of the three members recently achieving new levels of success, “Ace” functions partly as a victory lap, celebrating international luxury and good alcohol, but also stands as a showcase for Smino, Saba and Noname’s poetic dexterity. Noname first boasts that “Smino Grigi, Noname, and Saba the best rappers,” but then, in just a few bars, addresses globalization, immaturity in commercial rap, and minimization of sexual assault. Again, her braggadocio and broadsides never feel overzealous, especially when she admits “I’m just writing my darkest secrets like wait and just hear me out.” Side-stepping the paternalism and pettiness that diminishes the value of other ‘conscious’ rap, Noname presents her analysis through a confessional lens, offering her personal perspective on the issues that concern her. The track truly becomes an embarrassment of riches when Saba takes over. A shape-shifting, protean MC, Saba chooses to test his rapid-fire flow, floating over bars packed with assonance like “I can’t recall the last time that my live show was intimate / The price for the show just went up, in addition the tickets did.” With his masterful yet somber album of last April in mind, it’s encouraging to hear Saba rap “Pure-bred delicatessen, damn, I’m real, I can tell it” like he really means it.

The instrumentation on these tracks only further suggests that Noname’s artistic goals reach far beyond acclaim as a lyrical rapper. Matching the vibe of the lush neo-soul arrangements of “Telefone,” but increasing the complexity of the rhythmic sections, Room 25 could be lauded for its instrumentals alone. Clearly aware that the sound of “Telefone” drew people in just as much as its lyrics did, Noname often chooses to center the instrumentation on tracks such as “Window” which opens with a beautiful synth solo that invokes a toy piano and “Part Of Me,” which revolves around a contemplative guitar riff supported by cymbal-heavy percussion. On both of these tracks, main producer Phoelix offers stirring hooks, reminiscent of neo-soul icon Bilal, that tie Noname’s verses together with the production. The evocative, mellow grace of Room 25’s beats allow the album to fit into a myriad of different listening styles. You could play Room 25 in the car with your parents, deconstruct its lyrics in your bedroom, or throw it on at a summer barbecue and gain different insights into its artistic essence each time.

According to Noname, you can call this singular approach to hip-hop songcraft lullabye rap.

On the last song, “no name,” Room 25’s melancholic instrumentation and unassumingly radical lyrics come together to form a fluid, masterful synthesis. The track opens with more than a minute of musing guitar, bringing you closer and closer into its ambience, until Noname starts her verse. Whispering bars that carry the weight of the world with a weightless flow, Noname explains why she chose her title: “No name for private corporations to send emails to / ‘Cause when we walk into heaven, nobody’s name gon’ exist / Just boundless movement for joy, nakedness radiates.”And with that said, after just 34 minutes, Noname exits the stage, letting vocalists Yaw and Adam Ness have the last words on the album. We may wonder where Noname has gone and what she’ll do next, but for a while, all we’ll know is that she’s no longer in Room 25.

Nick Byers can be reached at nbyers@wesleyan.edu.