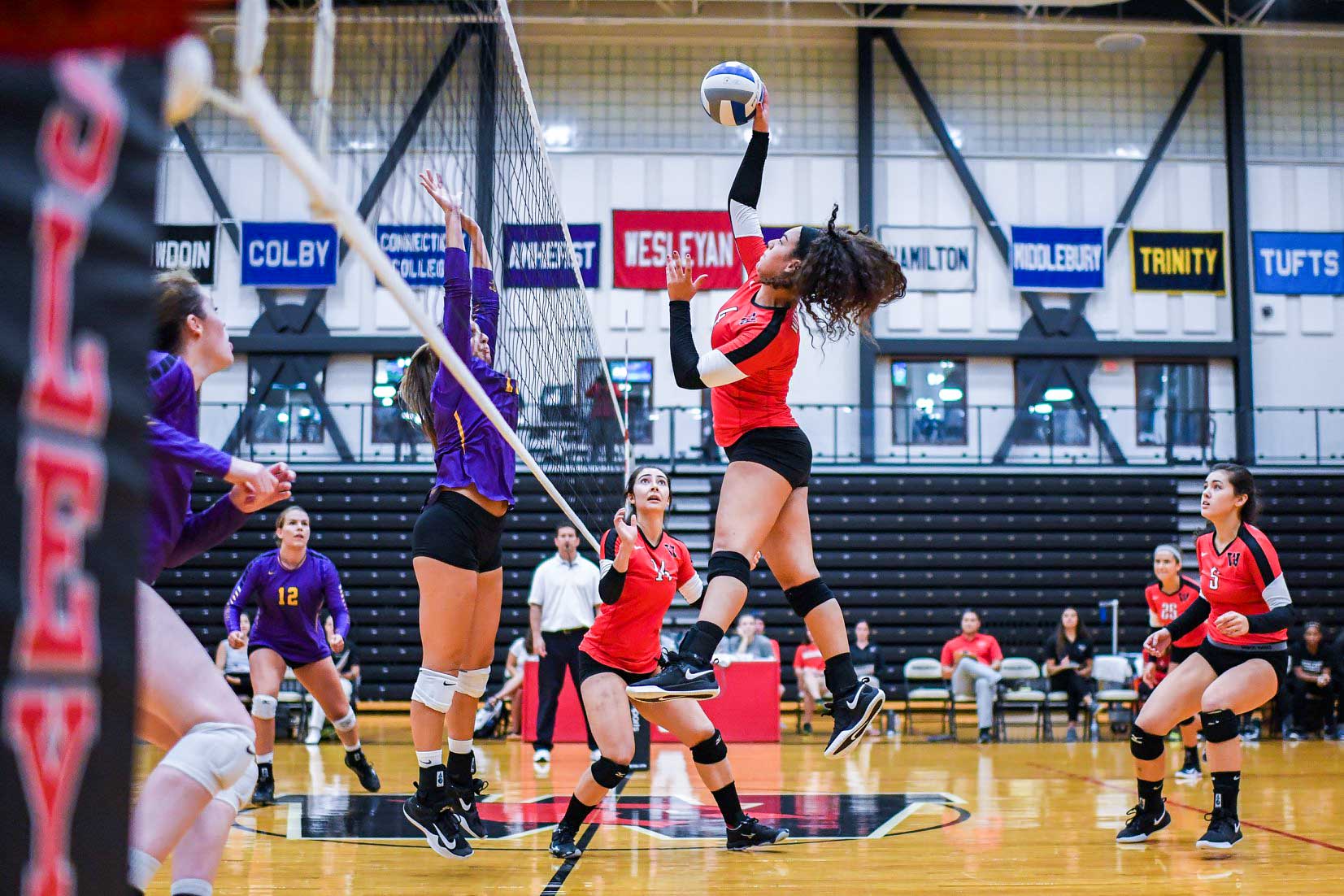 After a positive opening weekend with two non-conference wins, the volleyball team opened up conference play with two huge NESCAC wins this weekend, highlighted by a tough four-set win over Williams. In front of a raucous crowd at Silloway Gymnasium, the Cards battled back from a set down to win the match. The Birds won each of the last three sets: 25-21, 25-20, and 25-17. Wesleyan had 58 kills for the match, as star-hitter Nicole Hilton ’20 led the way with 15. In the category of digs, Wesleyan had 69 for the match with Phia Bellizzi ’21 posting a team-high 20.

The Cards followed up this performance with a dominating three-set win over Hamilton on Saturday afternoon, winning 25-14, 25-10, and 25-21. In this game, the Cards had 41 kills with Mia Jago ’22 and Harper Graves ’21 each tied for the lead with nine. They also had 62 digs paced by Bellizzi’s 22.

Jago received NESCAC Player of the Week honors for her incredible performances this weekend in both games.

So far this season, Head Coach Ben Somera has been pleased with the team’s performance and preparation.

“I think it is really important to have a good week of practice and make sure our team is transparent in their intention to get better each day,” Somera said. “When each team member is doing their part to improve on a daily basis, our team chemistry and trust in our system improves.”

He also added that the good week of practice was key to making in game adjustments during the match against Williams after dropping the first set.

“I think the first step is to understand why we dropped the first set,” Somera said. “I didn’t feel like it was anything Williams had done to us because we really beat ourselves by missing three serves and having a few to many attack errors.”

On Friday night, Silloway was filled by a large and raucous home crowd, primarily made up of students. The atmosphere added extra adrenaline to the already motivated squad.

“Our team was really excited to play on Friday, and we had a big crowd, so we might have just been too pumped up,” Somera said.  “It really brings us back to having a good week of practice leading up to the matches. When you practice well all week, no one panics.”

Wesleyan next has three games against Conn College, Roger Williams University, and Scranton University—all on the road this upcoming weekend.

Somera says the most important thing in continuing to build on their great start is remembering the goals the team set earlier this season.

“We remind the team of the goals we haven’t achieved yet and why it is so important to continue to improve each week,” he said. “We are actually competing against every team in our region and across the country to be the best team at the end of the season, not just the best NESCAC program.”

“Our program is at a point where our goals extend beyond our conference, and our team understands that we do not have the luxury of wasting time if we want to compete for regional and national championships,” Somera said. “We have a very finite number of opportunities to get better, and our NESCAC legislation puts us at a big disadvantage early in the season relative to the teams we are competing against outside our league for regional and national rankings.”

The Cardinals hope to continue their hot start when they return home on Thursday, Sept. 27 at 7 p.m. versus Westfield State University.