Who to Listen to on Any Given Sunday, Fox Edition 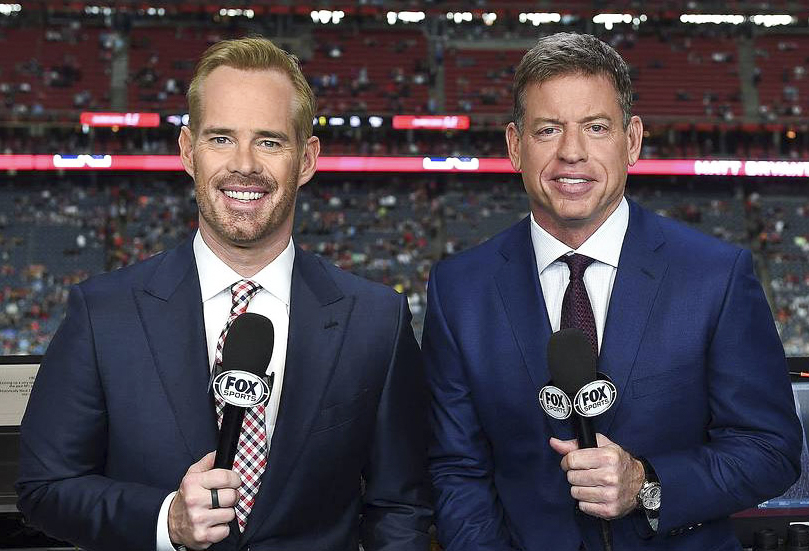 To the pleasure of my ears, I finally heard the energetic, squeaky voice of Tony Romo this past Sunday commentating the Patriots vs. Texans game. As Romo continued casually revealing plays before they were ran, I pondered which of the three NFL pairs is my favorite. CBS is headlined by Tony Romo and Jim Nantz, Fox is led by Joe Buck and Troy Aikman, and NBC has Cris Collinsworth and Al Michaels.

For the sake of analysis, I won’t include comments on the sideline reporters or expert rule specialists each network possesses. I do have a special place in my heart for kicking reporters. When Jay Feely says that kickers will have a tough time in a 15 miles per hour crosswind, I can’t help but smile. Gone are the days when it was just John Madden and Pat Summerall. Today’s game is engulfed by nonstop information from sideline reporters, constantly reiterating basic inferences that a cat could probably make. Even though I enjoy the style of Madden and Summerall letting the audience naturally watch a game without constant interruption, I feel the need to analyze and grade each network pair. The criteria for grading is broken down into two categories: intelligence and speech.

Here is the first edition of three: Fox. Troy Aikman and Joe Buck are quite the pair. Aikman, a legendary Cowboys quarterback, clearly knows the game. His football knowledge is an easy A. He’s a California kid who grew up living and breathing football. Starting at the University of Oklahoma, then transferring to UCLA, Aikman entered the NFL with a whole lot of hype. After several disappointing seasons, he started a run that made the Cowboys “America’s team” and a perennial dynasty.

After retirement, Aikman became Fox’s lead commentator in 2001. When I listen to Aikman, I’m really neither here nor there. He doesn’t have a terribly commanding voice like he did in the huddle or on the line making calls. Aikman also does not seem to possess an audible confidence or swagger. I’m not sure if this is because he isn’t exactly an alpha male or lead guy due to Joe Buck’s presence, but he doesn’t really take control. When a big play happens, he stays quiet, while Romo—who I’ll get to later—starts giggling and can’t control himself. Even though it’s Buck’s role to call most of the plays and Aikman’s role to give the analysis, I wish Aikman would interject or seem more excited.

That could just be his personality, though. On the field, he was viewed as a robot who simply did the job on a great team and didn’t offer much emotion. I give Aikman a B minus in speech because he doesn’t really get the audience excited.

And of course, there’s Joe Buck. The son of Jack Buck, a Hall of Fame commentator and the voice of Kirk Gibson’s historic home run, Joe Buck reverts to repetition, lack of analysis, and having a larger-than-life forehead. All in all, he has a good voice that’s easy to understand. He speaks slowly, uses simple words, and lets the play unfold before giving an immediate reaction (again, unlike Romo). For those who haven’t seen Randy Moss “moon” the Lambeau crowd in Green Bay, I would look it up.

“That was a disgusting act by Randy Moss,” Buck said. Even though Moss didn’t actually pull his pants down, Joe Buck clearly had an adverse reaction to the sequence of events.

A man of many talents, Buck led a successful Fox baseball commentator team with Tim McCarver as well. Like Aikman, however, Buck is somewhat robotic in his voice. He really doesn’t sound like a human at times. His monotone play calling doesn’t excite me in ways that Al Michaels’ or Jim Nantz’s do. His knowledge of the game is solid; it’s a bit subpar compared to Aikman’s, but I give it a B plus. Buck’s voice, however, forces me to give him a B minus for that category.

I give the Fox football commentators a B overall. This is unfortunate because they cover really good NFC games. You can always count on them commentating the Packers, Vikings, Panthers, or Giants due to their NFC schedule. Their voices don’t do wonders for my ears, which makes me rank this pair as my least favorite commentators.