The Deaths and Resurrections of Mac Miller: A Flawed MC Who Was Reinventing Himself Until the Last Minute 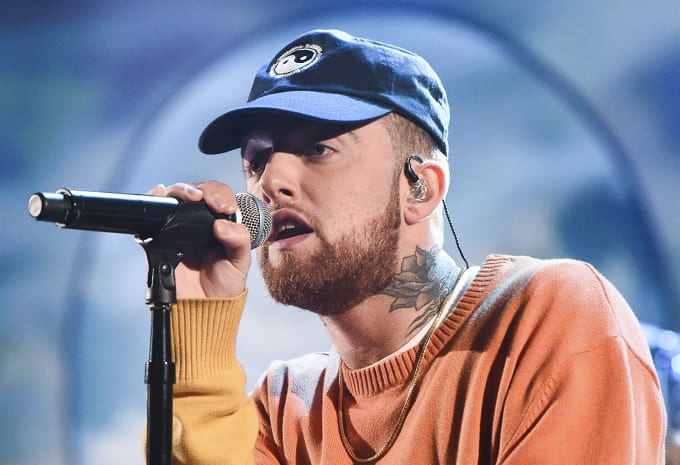 When Mac Miller came up via frat-rap anthem “Donald Trump,” the story was familiar. Following the model of Vanilla Ice, Marky Mark, Eminem, and countless other white men in the rap industry, Mac seemed destined for huge commercial success via cultural appropriation. When he released his first commercial album, just like his predecessors, Mac did well. His debut LP, Blue Side Park, sold over 100,000 copies in its first week, becoming the first independent record to hit Billboard’s number one spot in almost thirty years. Oh yeah, and he did it all at 19.

Donning brands popularized by rising Black MCs, such as fellow Pittsburgh rapper Wiz Khalifa, and selling cliché rags-to-riches narratives about material success, Mac paved the way for many of the popular white rappers we see today, be they Post Malone, G-Eazy, or Macklemore (who, in 2013, again hit #1 as an independent artist). Unlike Asher Roth, the other white MC to go big in the late 2000s, whose biggest song was targeted at the privileged 32 percent with college degrees, Mac made songs that were ingrained in hip-hop culture clichés, narratives that Black MCs had popularized and perfected decades before, be that the victory lap, the ode to your sneakers, or the party anthem.

Yet, with a life of easy money staring him in the face, Mac pivoted. Hard. He got fed up with the (appropriately) very negative reviews Blue Slide Park received, started to loathe playing to college audiences that bought into his frat-rap image, and picked up a lean habit that brought him deep into a struggle with depression and anxiety. Instead of choosing to stay in his certain superstardom, built on theft and commercialism, Mac moved to Los Angeles, opened his studio to mostly Black, West Coast hip-hop artists, and dove into a new sound and artistic direction.

On the lead single for his next album, Watching Movies with the Sound Off, Mac spits a bar that puts his entire prior discography to shame: “Wonder if Christ made a million off selling the cross.” In this lyric, Mac asks a basic, piercing question about remuneration, pondering the capitalist theft of one of the most famous religious symbols in the world. Mac seems to ask himself a rhetorical question: if people can make money off of Jesus’ cross, what percent does Jesus get? Although he may have never meant to apply it to his own previous work, the bar nonetheless functions as an inditement of his own artistic appropriation. Spoken over a quintessentially spacey beat by nu-jazz producer Flying Lotus, the single, titled “S.D.S.,” re-engages with the hip-hop canon, but through new, more critical routes. Mac’s repetitious, barely-there hook doesn’t play for mass appeal, while his lyrics explain that people are “selling drugs cause they can’t find no job,” when they’re not examining the religious iconography above.

While other songs on Watching Movies explore grief (“Aquarium”) and addiction (“Red Dot Music”), and others, it should be noted, still engage in the sexism and machismo of his earlier work (“Gees”),  “S.D.S.,” and the opener “The Star Room,” stand out. Originally sampling a choir-based song from Wes Anderson’s “Moonrise Kingdom,” “The Star Room” balances the blissful highs of drug use with the horrific lows, registering as both beautiful and terrifying. The beat, handled by Earl Sweatshirt, another MC who found fame in his late teens and has struggled with anxiety, suits Mac’s addled mania perfectly, where lines like “all these backfires of my experiments with drugs” can land right next to “I experience the touch of my epiphany in color form.” On the record, you hear the shared voice of two young men, unsure of where fame and drugs will take them, questioning what the future holds, be it greatness or a grave. Despite the darkness of that question, when I look to my own experience with anxiety, I can’t help but revel in their connection, grateful that, for at least a few studio sessions, neither of them had to experience such intense emotions alone.

On Mac’s next projects, his sonic experimentation and confessional lyrical style only developed further. On a small side project called Delusional Thomas, Mac offered up an alter ego embodying the most troubled, sociopathic, and vulnerable parts of his psyche, spitting lines like “if Satan could accompany a halo / then one day, maybe I could be somebody’s angel,” alongside a slew of references to thoughts of murder, addiction, and self-harm. Clearly inspired by evil alter egos like Eminem’s Slim Shady and Tyler, the Creator’s Wolf Haley, Delusional Thomas was received as a interesting, if derivative, development for Mac. With knowledge of his last days, however, lines like “already plan to kill myself when the clock hits 7:30” hit much harder. Many songs on his largest, most ambitious project Faces strike similar chords, with even more poignancy. Gone is the guise of an alter ego, leaving just Mac and his frank lyrics on songs like “Angel Dust,” “Rain,” and “Grand Finale,” emerge out of haze of hard drug use and often head towards feelings of doom. The album has an almost obsessive fixation with death, from “Funeral,” which Mac hopes will play at his own burial, to “Grand Finale,” which he candidly said was meant to be the last song he ever made during an interview in 2015.

Glimmers of light nonetheless shed through, on “Faces” as well as his next album’s “Good A.M.,” which discussed his upward path to somewhere near sobriety in 2015, and “The Divine Feminine,” inspired by his new encounters with love during his relationship with Ariana Grande. On all of these albums, mixed in with the dread of grief and addiction, were moments of hope and progress, where Mac expressed his desire to find help. “Perfect Circle / Godspeed” may have been the peak of these optimistic thoughts, where Mac could acknowledge “I need a wake up / before one morning I don’t wake up.”

His downturn in the wake of his breakup with Grande, leading to a DUI in May and his eventual passing, proves even more difficult to swallow when listening to tracks where Mac seems close to health, maturity, and confidence. Looking at Grande’s incisive, powerful remarks on Twitter regarding their breakup, in which she notes how she could no longer stay in a toxic relationship after years of trying to support Mac’s sobriety, deepens the pang of Mac’s relapse, knowing that the continuum of harm affecting Mac certainly spread to Ariana and other close friends. These many losses make me contemplate what better drug education and harm reduction approaches could have done for Mac and those that he hurt. Drug users are still one of the most stigmatized groups in America, especially those who are famous, and do not fall under the general (whitened) story of the opioid epidemic. Just this year we’ve seen Whitney Houston’s crack cocaine use mocked and satirized, while stories humanizing opioid users, especially in white, rural areas, stack up. To address drug use in America, harm-reduction practices that meet users where they’re at and focus on drug overdose prevention must be applied to everyone, not just those in red, rural states, and approaches (or songs) that patronize and shame users must be avoided. If these steps can be taken, maybe we’ll see a safe consumption site in Pittsburgh soon, and maybe we’ll see rappers like Mac find health and happiness.

This might seem far-fetched right now, but public opinion, like mental health, can oscillate frequently. When I first heard that Mac died, I was almost immediately worried about Earl, who had recently cancelled a tour due to anxiety and depression furthered by his father’s death. Of course, Earl’s first message on Twitter was of mourning, saying just “bro plz.” But just three days later, Earl went back online to say, “Mac spirit allowing me to fuck with my music rn and im THANKFUL.” He’s right. We should all be thankful.

Nick Byers can be reached at nbyers@wesleyan.edu