Despite Its Simplicity, “Crazy Rich Asians” Revitalizes the Dying Rom-Com 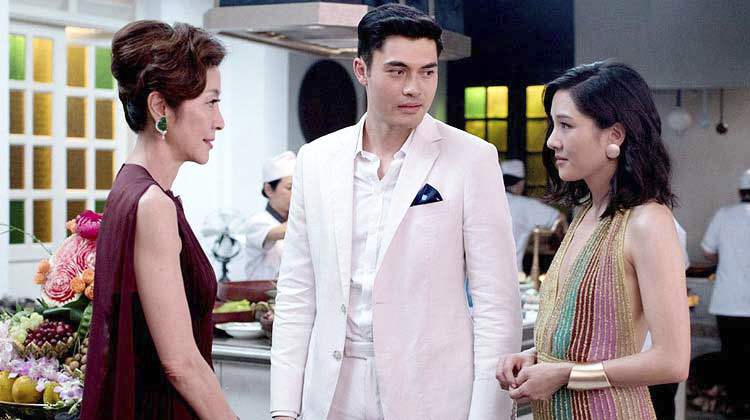 Just when the big-budget romantic comedy seemed to be going out of style for good, “Crazy Rich Asians”—the highly-anticipated adaptation of Kevin Kwan’s smash hit 2013 novel of the same name—has managed to inject new life into an increasingly tired genre. The film follows Rachel Chu (Constance Wu) and Nick Young (Henry Golding), a pair of lovestruck young NYU professors, as they travel to Nick’s childhood home in Singapore for the wedding of his old friend Colin Khoo (Chris Pang). Unbeknownst to Rachel, who has been kept in the dark by her boyfriend, Nick’s family is practically Asian royalty, and as a slew of billionaires, celebrities, and aristocrats descend upon the island for the Khoo wedding, all eyes are on her, the mysterious foreigner who has managed to snag Singapore’s most eligible bachelor. Naturally, Nick’s family—especially his icy mother Eleanor (Michelle Yeoh)—is not impressed by his girlfriend’s lack of pedigree, and Rachel quickly finds Nick’s relatives to be more than she signed up for.

Fans of the print version of “Crazy Rich Asians” will likely find plenty to appreciate about its onscreen counterpart. The movie is by no means a completely faithful adaptation, but frankly it’s hard to imagine what a completely faithful adaptation would even look like. Kwan’s original novel was a 500 page behemoth, packed with elaborate side plots, rambling footnotes, and a dizzying array of secondary characters. That level of detail, while entertaining on the page, would quickly have become clunky and confusing when crammed into a two-hour movie. So while some audience members might be disappointed to see several plotlines from the book—including Colin’s fateful bachelor party and Eleanor’s search for the truth about Rachel’s late father—altered or cut completely, it’s an understandable artistic choice.

Despite its streamlined storytelling, “Crazy Rich Asians” manages to retain much of the charm of its source material, and a big reason for that is its glorious visuals. The film does an impeccable job of representing the book’s elaborate descriptions of Singaporean high society, producing the kind of pure spectacle that was made to be watched on the big screen. The food is mouthwatering, the outfits are stunning, the scenery is lush, and the end result could probably double as an ad campaign for Singapore Tourism Board. Visually, “Crazy Rich Asians” is one of the most appealing movies I have watched in the past five years (possibly in my life).

It’s a good thing the movie is so visually engrossing, since the actual plot is nothing to write home about. Stories about a prince falling in love with a commoner are as old as time, and this is nothing but a 21st-century version of that same tale. While Nick and Rachel face their fair share of scheming relatives, jealous exes, and disastrous misunderstandings, there is never any real doubt that their love will ultimately prevail over any and all obstacles.

That being said, sometimes there’s nothing wrong with an old-fashioned fairytale. Not every movie needs to be narratively groundbreaking, particularly when the cast is strong enough to elevate it—as they are in the case of “Crazy Rich Asians.” Wu imbues her performance with just enough genuine sweetness to stop her—beautiful, kind, Stanford-educated—character from feeling too much like a Mary Sue, and Golding’s warm demeanor and perfect jawline (mostly) distract from the fact that he never really manages to provide a satisfactory explanation for deceiving his long-term girlfriend about his background. But the most memorable performances come from the film’s secondary characters. Yeoh manages to make Eleanor simultaneously cruel and sympathetic, Gemma Chan is radiant as Nick’s unhappily married socialite cousin Astrid Leong, and Awkwafina steals every scene she appears in as Rachel’s opinionated best friend Peik Lin.

There’s no question that “Crazy Rich Asians” is an entertaining film. What’s up for debate is whether it’s the exemplar of Asian media representation it has been hailed as. The cast and crew certainly think so; Yeoh, Wu, and director Jon M. Chu have all publicly talked about the movie as a huge and significant step forward for diversity in film. Public response, particularly from Asian viewers, has been a bit more mixed. Audience members have tended to fall into two camps. The first—exemplified by HuffPost Editor Kimberly Yam, whose Twitter thread on the movie went viral a few weeks ago—emphasizes how meaningful it is for Asians and Asian Americans to see themselves as protagonists when they are so often relegated to the sidelines. The second group criticizes the film for ignoring the economic complexities of Singapore in favor of focusing on the .001 percent, and for failing to depict South and Southeast Asians unless they are serving the East Asian protagonists.

These criticisms are not at all inaccurate, but they are hardly unique to the film. Kwan’s book, entertaining though it may be, is not particularly nuanced in its examination of race or class dynamics in Asia. “Crazy Rich Asians” is pure wish fulfillment—high society lifestyle porn with an international twist. And that’s okay. It’s true that the struggles of Singapore’s substantial working class and the historical mistreatment of non-ethnically Chinese Singaporeans are real issues that deserve to be addressed, but it’s also true that art doesn’t always need to be politically radical to be worthwhile. “Crazy Rich Asians” is both limited in its depiction of Asian lives and a major step forward. We don’t need to treat the movie as the final word on Asian representation when hopefully, it’s just the beginning of the conversation.