Moneyblah: How Gambling on a “Locker Room Guy” Paid Off in Chicago 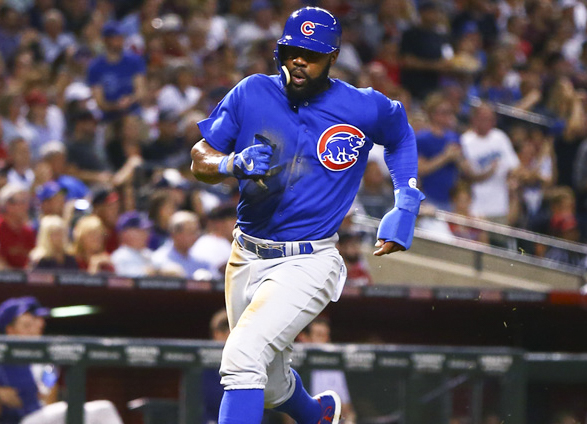 You hear the characterization all the time, but what is a “good locker room guy?” Are these athletes in the twilight of their careers whose value is solely based on facilitating sound chemistry on the team? Why do teams need athletes like this? Surely, a professional sports team can acquire athletes for the equivalent or lower salary to fill the roster spot. Are general managers in professional sports, scouts at all levels, and college programs actively seeking to draw athletes that possess the talent of fostering a sound locker room? No, of course not. All athletes are on a roster because the coach believes that the athlete can help the team win. Character, however, is one of the prime characteristics that coaches look for in all athletes. For example, let’s use the Chicago Cubs’ acquisition of Jason Heyward.

Before we look at what most perceive as the most important aspect of an athlete—their statistics—it’s important to understand Heyward’s background. He comes from one of those great athletic and successful families: a family like the Mannings, the Williams, and the Griffeys. Both of his parents attended Dartmouth. Comes from a well-educated family: check. Jason’s father, Eugene, studied engineering and played varsity basketball, while his uncle played for legendary coach John Wooden at UCLA. Comes from an athletically gifted family: check.

In a world of increased scrutiny and pressure for youth athletes to perform exceedingly well in order to receive scholarship offers, the Heyward’s lived in a culture that put the love of the game before anything else. As Heyward began to rise up in Georgia’s youth sports scene, his talent shined. He became one of the most sought after college baseball recruits in 2007. Scouts labeled him as a can’t-miss prospect; a five tool player. All the talent in the world and a bright future in professional baseball: check. Before Heyward graduated high school, Andrew Wilmot, a personal friend and teammate of Heyward’s, died in a car accident. Heyward would wear Wilmot’s number, twenty-two, for the rest of his career. A love and dedication to his teammates: check.

Jason Heyward, the 14th pick in the 2007 MLB first year player draft, has been a solid starter in the major leagues. He has a good mitt in the field, accumulating five Gold Gloves in the process. The problem for Heyward is consistency at the plate. There’s no question Heyward can hit for power. Heyward mashed twenty-seven home runs in 2012 with the Braves, but he hasn’t hit over .300 in any of his eight big league seasons or even topped eighty-two RBI’s.

Statistically, he hasn’t lived up to the expectations coming out of high school in Georgia. After five years with the Braves and a brief layover with the Cardinals in 2015, Heyward signed a whopping eight-year, one hundred and eighty-four million dollar contract before the 2016 season. Skeptics believed that the Cubs greatly overpaid market price for an outfielder that never completely met lofty expectations. The Cubs internally, however, were almost complete in the rebuilding process to end a 108 year World Series drought. Who were the architects employed to end such this long standing misery for Cubs fans all around the world? Theo Epstein and Jed Hoyer ’96, two individuals who never played pro ball.

Flash forward to the World Series November 2016. Cubs closer and stud Aroldis Chapman, who regularly throws his fastball in the low 100’s, just gave up a game tying homer to Rajai Davis. Yes, that Rajai Davis. The guy whose career high in home runs is a mere 12. The Indians seemed to snatch all the momentum from the Cubs’ historic season, while heavy rain stalled the game for 17 minutes. As Theo Epstein walked past the weight room in the bowels of Progressive Field to confer with Indians’ officials regarding the forecast, he witnessed something out of the ordinary: Jason Heyward commanded the respect and attention of his fellow teammates in that weight room like Al “Any Given Sunday” or Tim Tebow’s speech during halftime of the 2008 BCS National Championship game against Oklahoma.

While Cubs fans were having nightmares of the Curse of the Billy Goat, and the 2003 NLCS collapse against the Marlins with Steve Bartman at the helm, Heyward was showing Epstein that he was worth 184 million dollars. Heyward was hitting a pathetic 0.099 that postseason. He was in an all-time slump. As the rain in Cleveland subsided that night, the Indians took the field with confidence that they would be crowned champions, for the momentum was on their side. The Cubs, however, stepped into the box with a swagger that conveyed they weren’t going to lose the ballgame. A base knock by Kyle Schwarber and an game-winning RBI double by Ben Zobrist finally clinched the elusive title.

Epstein and Hoyer, individuals who rose up the ranks of front offices during the Moneyball era, gave an enormous contract to a player that defied the Moneyball ethos. Heyward looks like an athlete in batting practice, but his numbers contradicted his enormous contract. Epstein said in a postgame interview that Heyward, again hitting only 0.099 in the postseason, was one of the most crucial members of the team. Epstein emphasized that building a successful team isn’t all about numbers.

A great player isn’t necessarily one that scores the most touchdowns or hits the most homeruns. A great player is defined on how much he or she positively impacts the team. With the momentum gone and the guilt of not ending a legendary curse on the franchise, all of the Cubs’ players would have remained in their lockers silent. One stood up, however, and told his teammates, “let’s go win.” A great locker room guy was the paramount factor in snapping the greatest losing streak in sports history.