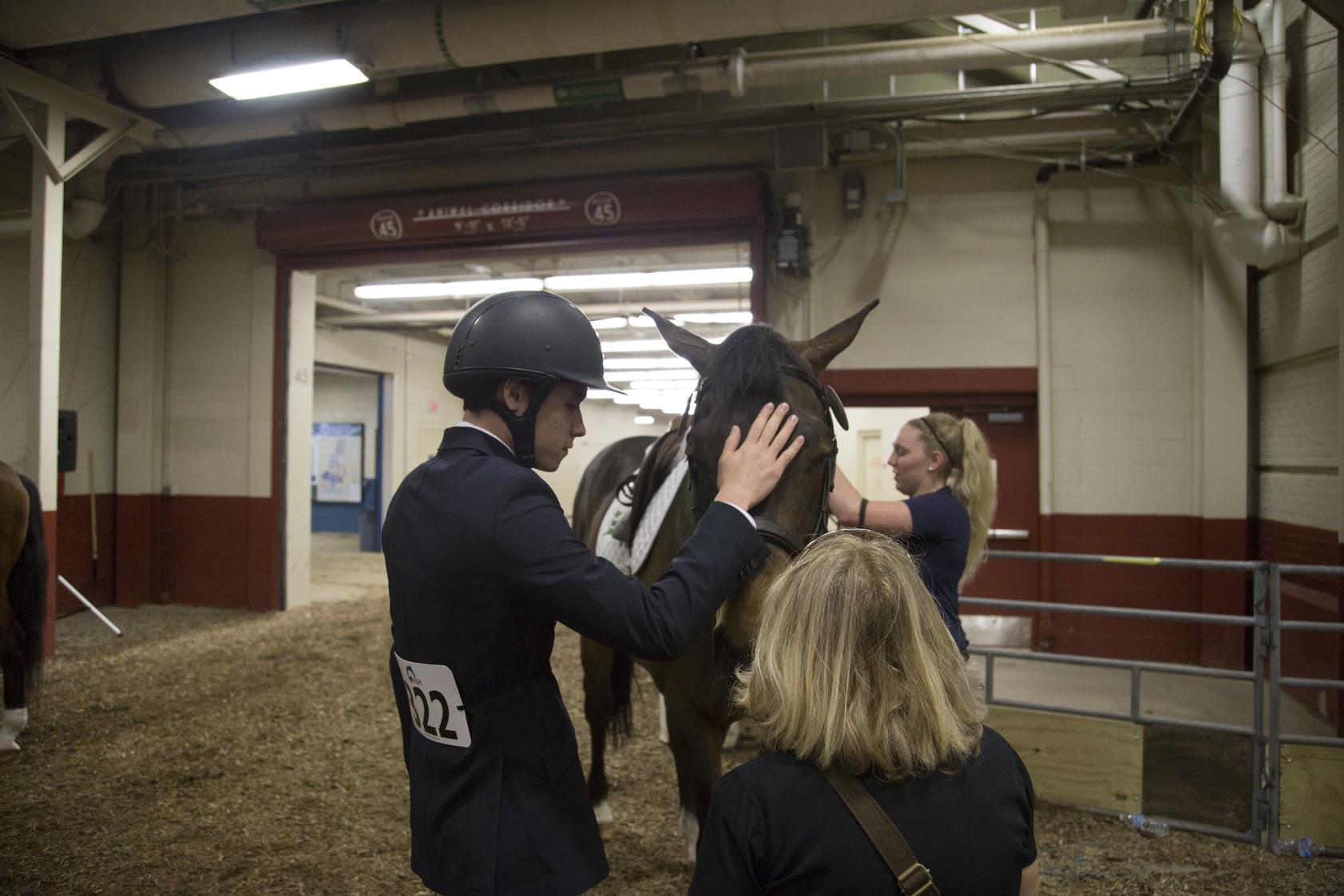 Located about a 15-minute drive from campus is Movado Farms, where a couple times a week a group of Wesleyan students heads to ride horses. This is Wesleyan’s equestrian team. Alessandro Lorenzoni ’20, a member of the team, recently competed in the national collegiate competition and won first place in his event. This is the first time a member of the club has qualified for the national competition, and also the first time a Wesleyan student has won first place in a national equestrian event—a historic moment for the club.

Lorenzoni and the rest of the University’s equestrian team are a part of the Intercollegiate Horse Show Association (IHSA), which includes over 400 colleges across 45 U.S. states and some Canadian regions. The overall IHSA competition has various levels prior to the national competition. Students can compete as individuals and as representatives of their school. Wesleyan is too small of a team to obtain enough points to qualify for team events, but according to Lorenzoni, club members often do well on individual competitions.

The competition structure has three primary levels. Students must first compete against other schools in their region, and the students who receive first or second place in a competition go on to compete on the zone level. The first- and second- place individual winners in the zone competitions get a chance to go on to the national competition, which, this year, was held in Harrisburg, Penn. Students earn points at each competition, which are then tallied up and compared with other individuals and schools. Lorenzoni advanced through the regional and zone competitions over the course of the semester, finding himself, excitingly, qualifying for nationals for the first time.

Upon finding out that Lorenzoni would advance, his fellow club members needed to figure out how to get him to Pennsylvania for the competition. On May 3, team captains Emily Hilton ’18 and Sarah Jacobs ’19, accompanied by their trainer, drove Lorenzoni down to Pennsylvania and stayed in a hotel for the night before his competition.

“Sarah and Emily offered to drive me to Harrisburg, at the Harrisburg Show Complex, so we left Thursday afternoon, they drove me until late at night, we arrived probably around midnight, and we stayed at a hotel,” Lorenzoni explained. “Our trainer, Louisa Fedora from Movado Farms, was also there. And so we got some shut-eye, and then Emily and Sarah, as well as Louisa, went to the coaches’ and captains’ meeting at 6 a.m. They came back, we got breakfast, and went to the show complex.”

The national competition spans multiple days, with a variety of events over the course of each day, depending on the specific competition. Lorenzoni competed in an event on Friday, May 4. Within the events in the national competition, there are two different subsets: equitation on the flat, and equitation over fences. Equitation over fences involves a rider and horse jumping over fences on a set course, while equitation on the flat—which is Lorenzoni’s event—involves a flat ring, where competitors show the judges that they can control the horse in terms of speed and motion, and are judged for posture and style.

The relationship between horse and rider is, if not the most important aspect of equestrian riding, then certainly a vital one. At these competitions, riders are randomly assigned a horse from a pre-set group to ensure maximum evenness in the field. Riders have only a short amount of time to get to know their horses.

“I drew a horse I got along really well with, Liam,” Lorenzoni explained. “I then got geared up, got on, and then we went into the ring.”

Lorenzoni, along with representatives from schools across the nation, went through the 15-minute course, in which he demonstrated his skills as a rider. He then dismounted and waited among the other riders to find out his score.

“Once the judges are satisfied, they ask you to line up in the middle, and they ask you to get off your horse,” he explained. “You walk over, and then you’re basically in a line, and they start calling you out from last place to first.”

While Lorenzoni waited, name after name was called, until he was the only one left. Lorenzoni was caught off guard when realized he’d earned first place.

“It took a second to realize,” he admitted. “But it was definitely exciting!”

The group had to leave soon after Lorenzoni received his first place score. They grabbed an early dinner, and then returned straight to Wesleyan that night. It was a short trip for the group, but an undeniably exhilarating one.

According to Hilton, Wesleyan’s equestrian team has been on campus since the early 1990s. The team practices multiple times throughout the week, with sessions based on availability. Movado has “schooling” horses, meant for teaching, that students can ride. The team also has bi-weekly competitions on Saturdays, hosted by various schools, at which Wesleyan students compete. Common opponents include the University of Connecticut and Conn College.

“We’ll drive up there, usually in the early morning, then compete during the day, and come back in the evening,” Lorenzoni explained of the Saturday events.

Lorenzoni noted that he’d been riding for several years prior to coming to Wesleyan in a style of riding called Western. The IHSA competitions use the English style, which involves a different saddle, different cues to communicate with the horse, and a different posture in the rider.

“I’ve been riding English since last year, so the two semesters last year, as well as this semester and last semester,” Lorenzoni said. “And then previously, I’d been around Western horses a little bit. There’s quite a bit of difference. I kind of had to relearn from scratch what I was doing—kick off a lot of old habits from Western. If you look at a Western rider and an English rider, you’d see a lot of differences, so it was a bit of a process to figure that out, but I had a great coach and great captains.”

The team, overall, is incredibly excited for Lorenzoni, according to Hilton and Jacobs. While other members have made it to the zone competitions in the past, Lorenzoni has overcome a significant hurdle in advancing to the national competition. He repeatedly stressed that he could not have advanced this far, let alone have won, without the help of other members of the team.