Ben Michael Looks Back on Two Decades at WESU 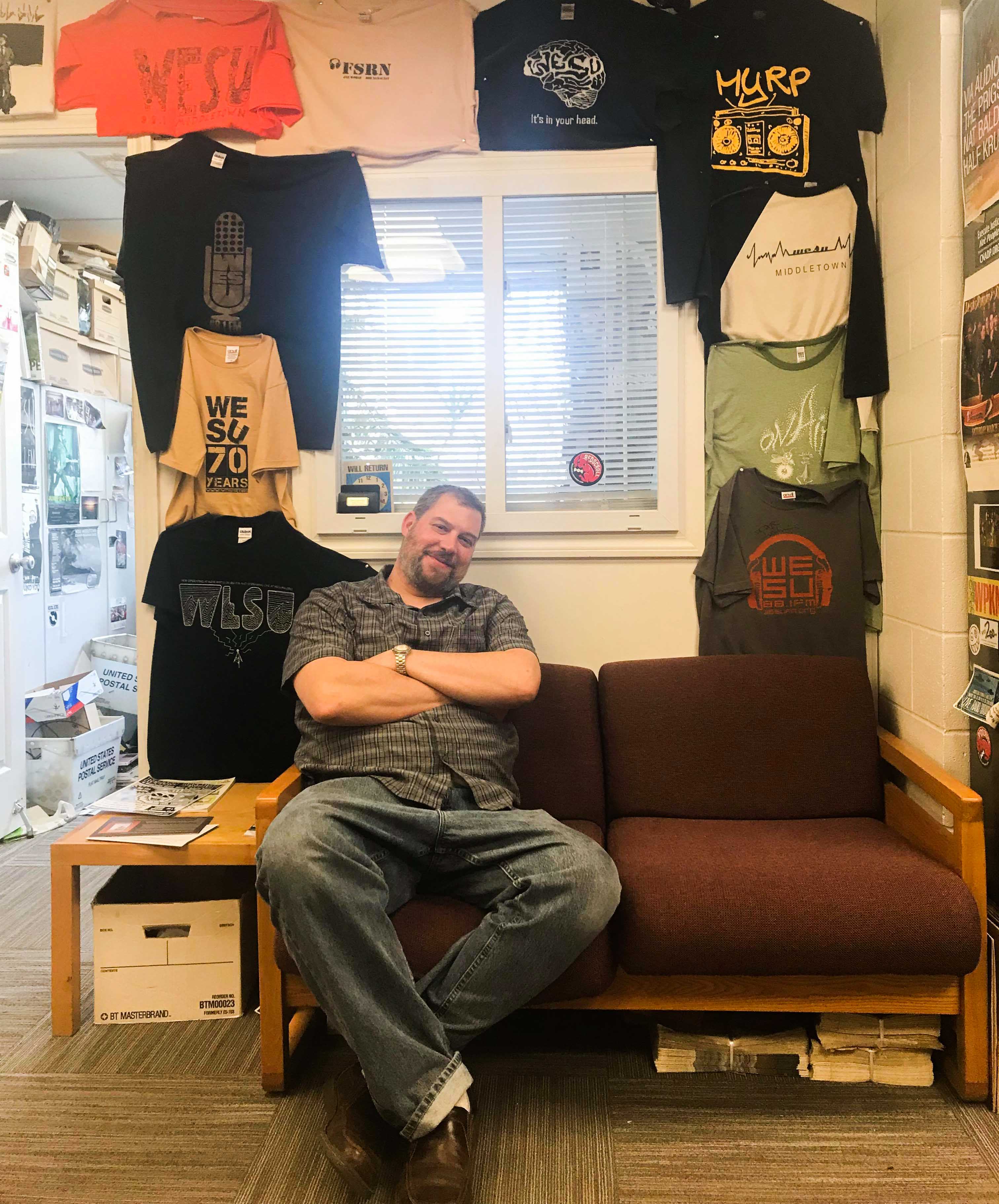 WESU General Manager Ben Michael wears the nickname “townie” like a badge of honor. Michael has been involved with WESU since the summer of 1998, and in light of the station’s recent shortlisting for CTnow’s best college radio station poll, The Argus sat down with the mainstay GM. Michael talked about his history at Wes, the station’s current pledge drive, and his favorite item to order on the menu at classic Higganum barbecue spot Higgies.

The Argus: I hear that 2018 is your 20th year at WESU. How did you first find your way to the station?

Ben Michael: Well, when you grow up in a town like Middletown that is fortunate enough to have a resource like WESU, the radio station finds you if you’re open to it. This is the station I grew up listening to music that I couldn’t find elsewhere in high school. This is where I could hear underground hip-hop, underground metal, and WESU was hosting concerts almost every week at Eclectic House, and at that point they were open to the public.

I can remember the first car I had was always on WESU, and hearing Franco, who still does our Italian programing on Saturdays. He used to have a daily show Monday through Friday from 6 to 8 a.m. On my way to school, I would turn on the radio. I always knew I wanted to be involved in the radio station, but it took probably another six or seven years to get involved, not for lack of trying. It was a little bit different back then.

After I graduated from high school I went out to California, and worked in the AmeriCorps program out there in Oakland and came back in 1997, 1998-ish. Pursuing WESU was high on my list of priorities. I worked for Oddfellows Playhouse and we would go to what were then the student activities fairs to recruit work-study students for Oddfellows. WESU would always have a booth there and I would go and put my name on the list to sign up and I think because I didn’t have a wesleyan.edu address, I never got the call back. So eventually a couple of summers later, somebody that I knew peripherally through Oddfellows was on air at WESU and also the summer station manager—he was a townie like myself—and he opened the door and let me in.

A: What was your first show here?

BM: My first show was called “Difficult Listening.” It was a very late night, 3 to 5 a.m. on Saturday nights, an experimental music hour where we took great delight in mixing vocals of folks like William S. Burrows with—I mean we’d literally get every input in the studio going—so I’d have Tibetan Chanting on turntable one, electronic circuitry from the 1950s on CD 2, and we’d literally start stacking all of these different layers of sound, filtering stuff in and out.

We were always looking for instrumental music. Some of the folks in my crew made electronic hip-hop beats. We would all use homemade instrumentals, some instrumentals from 12-inch hip-hop singles, as well as a lot of dub reggae. The more I worked on my own, the more dub reggae I started to include in my set, which started to hit the ears of West Indian folks who live in Connecticut and started to call me in the studio, which eventually led me to play more of that music. And then it became less of a mix show and more of a conscious roots, revolutionary-reggae type show, which evolved into something called “Dub Revolution,” which I held down for eight years and it became a mainstay within the reggae community in Connecticut. I was invited to host concerts at the West Indian Social Club, and at Toad’s Place, and I got to introduce legendary musicians who are no longer alive.

It was a really cool opportunity to become a part of a community that I was really an outsider to because the show was really embraced. Through that, another relationship developed between me and another conscious roots host and we created a weekly talk show, before we had the weekly talk programming we do now. It was a weekly [phone-in] show that was utilized by the West Indian community and was called “Talk for Your Rights,” which was the name of a title track from a local reggae band’s album. We would get the phone ringing off the hook to talk about the news of the day, conspiracies, Afrocentric and Caribbean-centric issues affecting Connecticut residents.

A: What are some of the bigger changes that have gone on at the station since you stepped into the role of GM?

BM: This is probably the longest run of stability that the station has had. Exploring the history of the station, there have been a lot of ebbs and flows, student interest waxing and waning. A lot of that depended on the trends of the time, the technology. But, I think just providing stability so alumni could rally around the station, we could put out a consistent enough program so that the community could depend on the station as a resource. Before I started, one of the reasons the station needed a GM was because it pretty much turned on and off like a light switch during the day. There just [weren’t] enough active volunteers to hold down the fort. You know so, it would not be uncommon to hear the station off-air until 1 p.m. go on for an hour in the middle of the day and then go off for an hour until somebody else came in.

So, I think to that stability, in terms of a program sense and in terms of what we’re putting out there, has been key in laying the groundwork for us to start to depend on listener support. And listener support is what has allowed us to grow exponentially.

A: WESU was recently shortlisted as the best college radio station on CTnow.com. What are your thoughts on the competition and how do you feel about your chances this year?

BM: So the competition doesn’t change that much each year because radio stations don’t come and go very easily, at least not FM radio stations. But the hometown favorite in New Haven is of course WNHU, which is at New Haven University. Their format has changed a lot over the years. They’re pretty much a straight up NPR station these days, which may very well affect their outcome in the New Haven readers’ poll. Over the next month or so, we’re hoping folks will go out there and vote and push us over the top.

A: A bit of a throw away final question, but I have to ask, as a fellow Higganumite, when was the last time you went to Higgies and what did you have?

BM: [Laughs] Well, I would say it’s always a toss up between Higgies or Pilot House, but Pilot House is done at this point, I don’t think they’ll be opening back up. Last summer, I was there with my stepson, and at Higgies, I go for a hotdog with mustard, kraut, and relish.

I should clarify, that while I pay taxes to the township of Haddam, I live on the other side of the river, in Haddam Neck. We don’t have a hot dog stand.

Editor’s Note: This interview has been edited for length.

Emmet Teran can be reached at eteran@wesleyan.edu and on Twitter @ETerannosauru