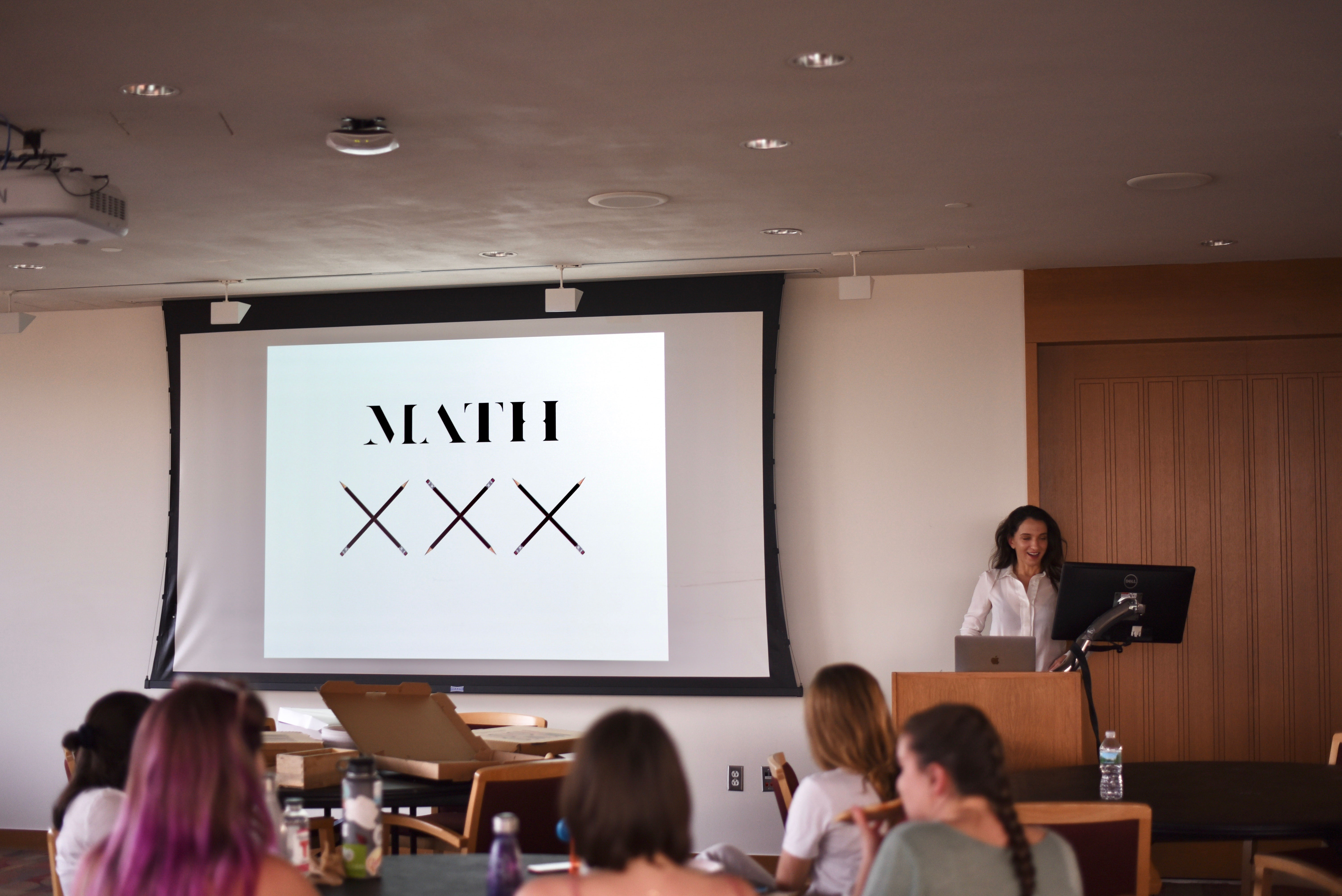 “I wanna know about the first time you felt turned on. Where were you? What was the situation?”

MATH Magazine Founder Mackenzie Peck began her talk with this question on Tuesday, May 1 in the Daniel Family Commons.

Now headquartered in Brooklyn, MATH magazine seeks to re-envision pornography by depicting desires that are often neglected by the media. The magazine aims to display an array of genders, bodies, and sexualities in an ethical, sex-positive, and diverse way.

“MATH Mag was created with the intention of highlighting sexual narratives that are not often found or portrayed in the mainstream media that might have negative stigma,” Rebecca Goldfarb Terry ’19 said.

Peck moved to New York and began work on MATH by connecting with friends and creating a MATH community.

“I was really working with whatever I had available to me in terms of models and locations, particularly in the style of the imagery,” Peck said. 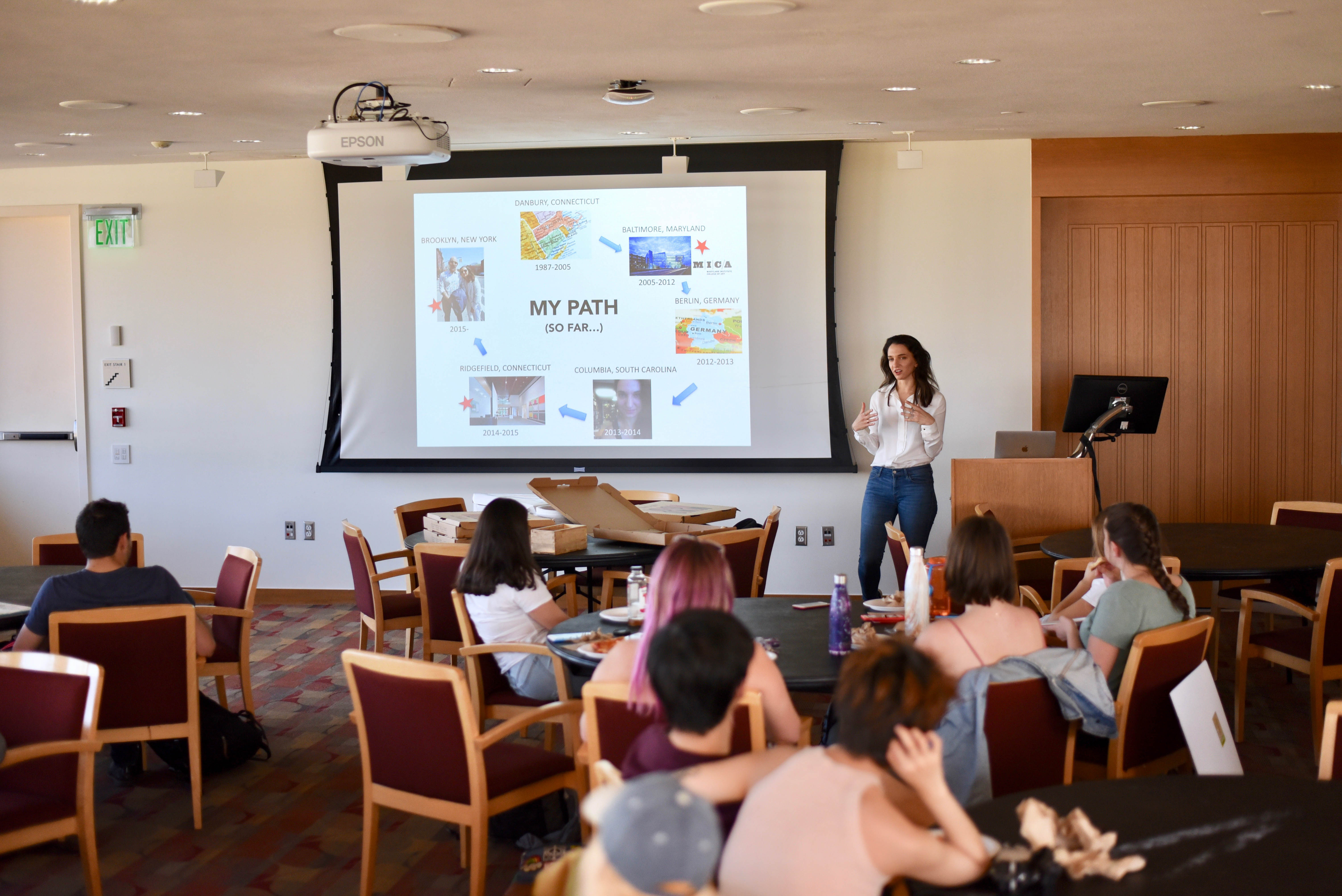 While she found little success in her approach initially, she eventually created connections that became foundational to her magazine. Peck cited numerous incidents of trial and error when first developing the magazine; printing, artwork, publishing—all these seemingly small tasks had to be navigated as she first figured out how to make MATH.

But all of the work paid off. As she showed during the talk, MATH’s Instagram presence has exploded, now reaching 11 thousand followers. She attributes some of this success to her original hashtag, #loveandbutts, as it encouraged people to send the Instagram tons of users’ personal photos.

“In the beginning, [we] started out with like 200 followers. And maybe even more importantly, the kind of imagery I had in the feed was learning how to communicate our message and content of the pages and some of my personal life,” Peck said. “Being really intimate with our followers was really important to me from the start.”

Another important aspect of making the magazine into a more established publication was connecting with other groups of people in industries similar to hers. To that end, Peck started a collective called the Mag Mob, full of indie publishers all facing the same goals and frustrations. She also is a member of Women of Sex Tech, an inclusive community of sex-positive women in the changing sex tech industry.

“It’s one of those things where we’re sharing information, resources, and supporting one another,” Peck said.

In response to MATH’s rising popularity in print and on social media, Peck started hosting more events for the publication so models and photographers could meet and eventually send photographs into the magazine. She also hosts photo meetups, where she, a team of models, and photographers, take off their clothes and take public, nude photos.

“People always start off awkward and nervous,” Peck said. “But as you start walking around, you start to talk, you get more comfortable, and by the end, people are like playing in the middle of walkways with their dicks out. And I have to be the one like, ‘chill guys.’”

Now, MATH tries to maintain their inclusive values in everything they do as many popular, mainstream media outlets have picked up on the magazine’s success.

“Beneath MATH’s discrete, textbook-like cover lies a bevy of dirty photos, stories, poems, and illustrations from staff and freelance contributors from around the globe,” a Vice article states. “The business is fully independent, female-owned and operated, and steadfastly sex-positive—a breath of fresh air in a genre long-dominated by industry oligarchies and, face it, straight, white men.”

But not matter what, Peck wants to retain a sense of surprise and discovery in every issue moving forward.

“I haven’t gotten arrested yet, but I think it would be good for the brand,” Peck said.