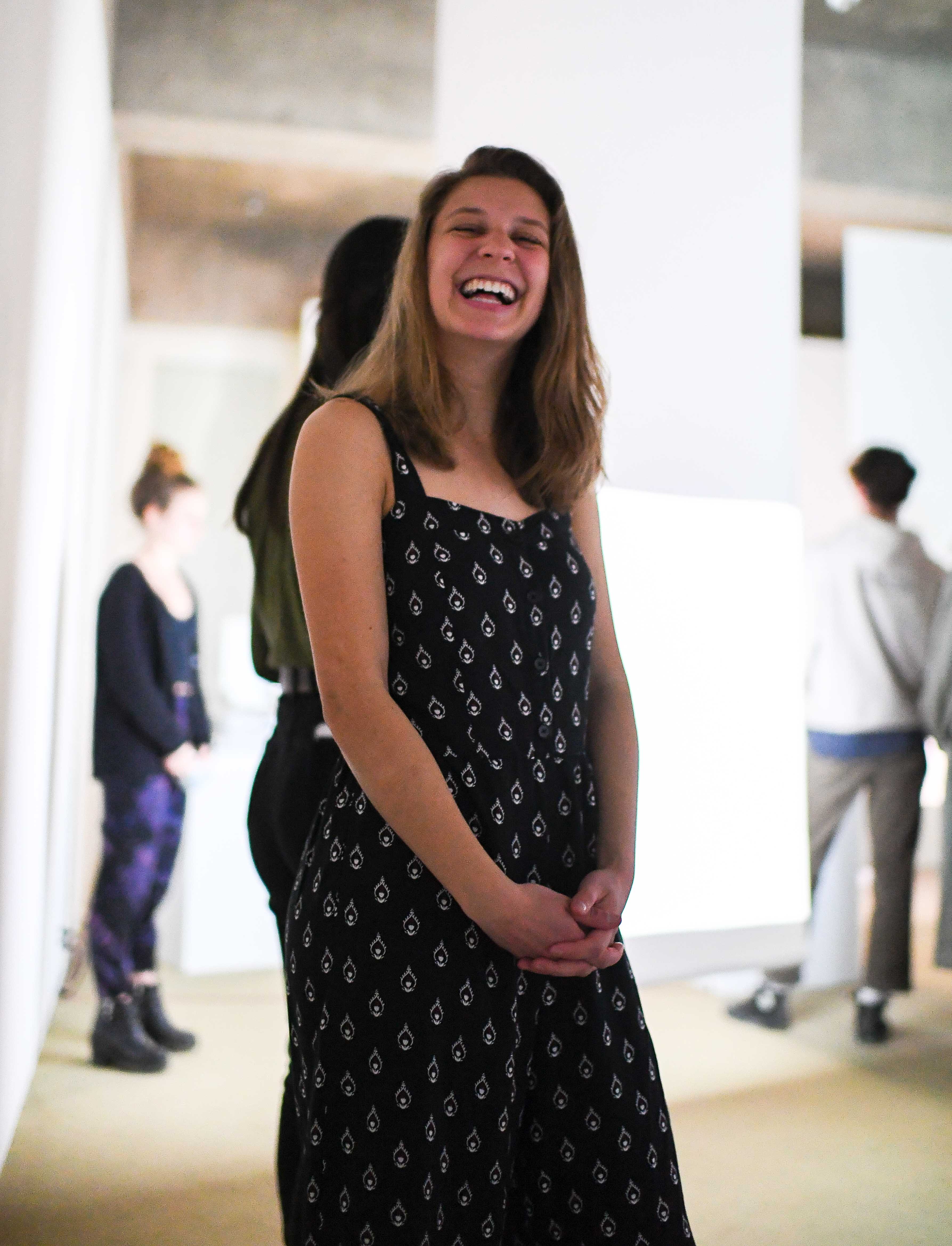 If you haven’t gotten to know Melissa Joskow ’18 yet, you’re really missing out. As a captain of the all-gender Ultimate Frisbee team, Throw Culture, intern at the Davison Art Center, and frequent Usdan eater, Melissa’s outgoing personality does not go unnoticed here on campus. The Argus sat down with Melissa to discuss her studio art thesis, involvement in WeShuffle, and her opinions on Usdan’s tofu tikka masala.

Melissa Joskow: I guess I’m around campus and I smile a lot. I take a lot of classes, I eat in Usdan a lot, so maybe people see me there.

A: What’s your favorite Usdan meal?

MJ: I was just talking about this with my housemate, actually. I think that the rice and lentils with the onions is really good, and also the tofu tikka masala—all of this is obviously vegan. Cashew fried rice—also very good. And then, of course, the staple is Mongolian grill. I’m a big fan of Usdan, especially Usdan lunch.

A: I hear you’re pretty involved on the Frisbee team, can you tell me a little bit about that?

MJ: I’m one of the five captains on the all-gender Ultimate Frisbee team on campus. I started playing Frisbee in high school, and kind of knew that I wanted to continue to be involved in college, and mixed ultimate was something new. I really enjoy playing and captaining, even though sometimes it’s very stressful. The team has been a really wonderful community for me during the last four years, and I feel like we’ve really grown and changed in a lot of cool ways, which I’m really happy about.

A: Do you have a favorite memory of playing Frisbee at Wesleyan?

MJ: This year was the very first year that the USAU [USA Ultimate], the large organization that runs a lot of college Frisbee tournaments, put on a regional tournament for mixed-gender teams. We went to that in the fall, and I was really proud of my team because we’re pretty casual, but the group that came really stepped it up. We were all there—we were serious, but we were still having fun. Something that’s really important to Frisbee is the spirit of the game, which means recognizing that all the teams are there to play and have fun and to be respectful of your teammates. We won the spirit award for the B section in the tournament, and so I was really proud of us. We were able to play competitively but also stay really spirited, and that’s sort of the perfect combination of what I hope that Throw can be.

MJ: There’s a couple other things. I’m the captain of WeShuffle, which is the first and only tap dance collective on campus. Elisa Greenberg [’18] and I sort of took the helm this year. That’s been really fun. We perform in a show in TERP in both the fall and the spring, and then in the spring we also had a showcase. A lot of different people from the group choreographed, and we performed in the World Music Hall. The showcase only started a few years ago, and we started by performing in Usdan, which was terrible, and we’ve graduated to the World Music Hall, so I’m really proud of WeShuffle for becoming a real thing. We also hosted our first beginner workshop this past fall, which was cool. We hosted it with Milk and Choreo, and they were really helpful in helping us organize that and making Facebook events. That was cool because tap is one of those things where, if you don’t start tap dancing when you’re younger, you kind of can’t ever get back into it, so to be able to offer something for people on campus who were interested in tap and wanted to learn a few steps or something, if they wanted to join WeShuffle later. I was involved in the Outing Club for a while. I lived in Outhouse my sophomore and junior years. I was really involved in going on and leading outings. Sometimes Wes can feel like it’s a square mile, and it can be kind of overwhelming. To just get away for an hour or two and go hike is really cool. I also work at the Davison Art Center. I’m an intern. That’s really great because I’m a studio major, and I really like printmaking, so being able to become really familiar with this collection and also share it with people is really great.

A: Can you tell us a little bit about your thesis?

MJ: The joke is that I didn’t write a single page of my thesis. I’m a studio art major, and the studio art thesis is required for studio art majors. The thesis doesn’t involve any writing, you just make a body of work and show it in the Zilkha Gallery in April. I was working with a professor from Yale, his name is John Gamble, and also Kate TenEyck—those were my two advisors. I was making hand-drawn, stop-motion animations based on the Book of the Revelation of Saint John, otherwise known as the apocalypse, and the way that it’s been interpreted in art historical context. I was specifically looking at some Dürer prints in the Davison Art Center. I had done a project on them during my sophomore year, so I was sort of revisiting them. Thinking about the sort of themes I was interested in and the ways to develop them visually, I projected the videos I was making onto four paper screens and three giant three-foot balloons in South Gallery in Zilkha. There were sounds, and also a printed element. I knew going in that I wanted to create an immersive experience and, using projection, that’s how I did that. I had to borrow a ton of projectors—people on campus were amazing, and the thesis would not have happened without all the help of my friends and people with projectors and various professors with projectors. That’s what I did, and it’s done now!

MJ: I do! I have a job. I’m from Arlington, so I’m moving back home and working in D.C. I start June 18th, and I want to take a luxurious vacation before then. I’m working for a place called Media Matters for America as an associate digital designer, which is cool because I studied art and now I get to do creative stuff in my job.

A: What’s your favorite memory that you’ve had this year?

MJ: I don’t know if I have a favorite specific memory, but I think something that I really value is proximity to people that I care about on campus, and I know that it’s definitely going to be harder when I graduate to be able to so casually see people, so I’ve been trying to take advantage this year of getting meals with friends or just hanging out. It’s so easy—we all live so close to each other, and that’s something that I really value.

A: What’s your most embarrassing memory?

MJ: I’ve cried in a lot of places on campus. In a lot of really weird places. Maybe that’s embarrassing, I’m a big public crier. Having people see me do that is probably not great, but I don’t care anymore. It’s who I am.

A: What’s your best advice for freshmen?