“Westworld” Returns With a Renewed Focus

In its first season, “Westworld” was one of TV’s most promising and frustrating shows. The show is loosely based on the 1973 Michael Crichton film of the same name, in which robots in a wild-west themed amusement park begin violently attacking and murdering the human guests for no apparent reason. The TV show dramatically expanded on the simple plot of the film, exploring the complex nature of the “hosts” (the robots of the park) and the nature of their creators, and even jumping among multiple timelines. Furthermore, it uses a simple, entertaining premise (robots rebelling against their human overlords) to explore complex themes and philosophy, from a reimagining of the story of Adam and Eve, to theories of consciousness. All of this is to say nothing of the show’s incredible cast and production value.

Still, for all the laudable ambitions of creators Johnathan Noland and Lisa Joy, there was much to be frustrated about. Namely, the show seemed more interested in its complexity than its storytelling. It wanted to give us complex metaphors and commentaries on the nature of narratives without attempting to craft a solid narrative. It wanted to intrigue us with intricate mysteries, but these plot threads were often kept so mysterious it was difficult to know what to even be intrigued by. And while it boasted an amazing cast, it rarely gave away characters’ motivations for doing anything. If anything, “Westworld” didn’t explain the basics of its story until the final episode, in which the robot’s violent rebellion finally kicks off. Until this moment, the obvious inciting incident of the entire story, “Westworld” was mostly spinning its wheels, distracting from its noticeable flaws with nudity, violence, and a bit of philosophy delivered from the silver tongue of Sir Anthony Hopkins.

But now that its narrative has actually begun, “Westworld” has returned as a far more confident and entertaining show. Its narrative is more clear and focused, its mysteries more intriguing and less confusing, its characters more defined; if anything, the show is playing to its strengths, even if its weaknesses are still a lingering problem. 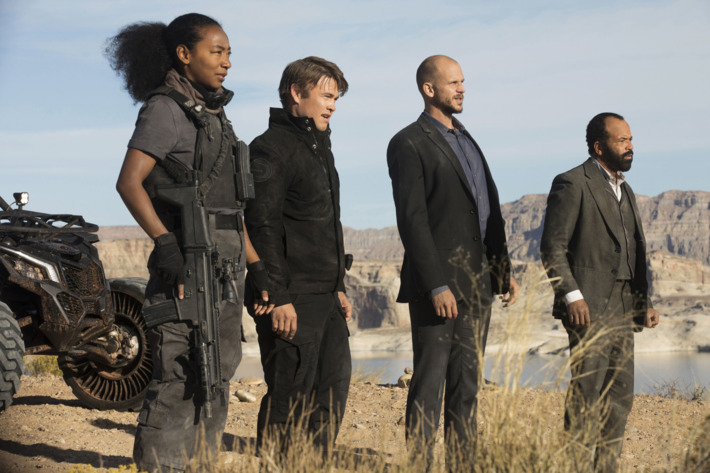 Season Two begins after a host, Dolores (Evan Rachel Wood) shoots the creator of the park, Robert Ford (Hopkins), and follows the perspectives of several characters in the aftermath. Dolores, with the help of her romantic partner, Teddy (James Marsden), has begun hunting down the humans who remain in the park, taking revenge for all the cruelty they continuously inflicted on her. Many hosts, though notably not all, have followed in her footsteps. One such exception is Maeve (Thandie Newton), who searches for the host once programmed to be her daughter. There’s also Bernard (Jeffrey Wright), who ventures off with corporate executive Charlotte Hale (Tessa Thompson) to protect himself and defend his secret identity as a host. Finally, there’s the oddest subplot involving the Man-in-Black, (Ed Harris, who deserves more to do than his tough-guy shtick), who has to play a game set-up by the late Ford. The goal? In typically cryptic “Westworld” fashion, he must “find the door.”

While the episode does little more than establish this season’s plotlines, it still suggests that the show has learned from its previous flaws and play to its strengths. The incredibly cryptic storytelling is toned down effectively. There are still various overlapping timelines, but this time around it’s not a mystery that the show is jumping between past, present, and future. Even though some character motivations, like Dolores’, remain unclear, it’s easier to understand why people act the way they do. There’s still plenty of grand philosophical questions being asked, but this time they’re dealt with more organically and are actually important to the story, as opposed to a distraction from it. While it’s not a show that has fully overcome its flaws, (and with only one episode released, it’s too soon to properly judge it), “Westworld” has already returned with much more confident, smart writing.

All of which is to say nothing about the show’s amazing cast. Newton easily steals the show as Maeve, providing both charisma and emotional depth to a character with admittedly odd motivations. Wood is given far more to do here than he was last season, delivering a simmering, subtle rage to her once “innocent” character turned hell-bent vengeance-seeker. As Bernard, Wright is still excellent, even if, as of writing, he hasn’t done much this season beyond being afraid and confused. Simon Quarterman, who spent last season doing almost nothing at all, emerges as the show’s terrific comedic relief. Meanwhile, much of the supporting cast, including Tessa Thompson and James Marsden, continue to be tragically underutilized on characters without much personality or much to do at all.

So, “Westworld,” has still not met its full potential. While its full of amazing production values and a great cast, the show’s writing is still not without its flaws. There are still underused actors, eccentric plot lines, and character motivations that are unclear. Dolores’ speaks of a dream she’s trying to fulfill, as she leaves people to die by hanging, but we don’t yet know what this dream is. And yet, if this is the most confusing and unclear part of the season thus far, it’s hard to complain. Though it’s still in its early stages, the opening episode of “Westworld” season 2 promises a vastly superior show, one that’s not merely pretentious, but genuinely deep and intriguing.