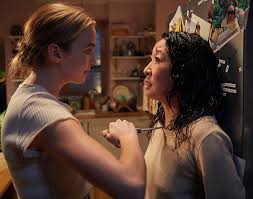 A young woman sits in a Viennese ice cream shop, staring straight at a little girl. She tries to smile at the girl, but her mouth only twitches spastically. The girl is unimpressed. She looks instead at the man behind the counter, who smiles widely at her. The woman tries to imitate his smile, experimenting with pulling her cheeks up. The woman gives up and strides out of the ice cream shop, tipping the little girl’s bowl of ice cream into her lap. She smiles.

This is Villanelle (Jodie Comer), one of the main ladies of “Killing Eve,” BBC America’s new spy thriller based on the “Villanelle” novellas by Luke Jennings. Her counterpart is Eve Polastri, played by Sandra Oh of “Grey’s Anatomy” and “Princess Diaries” fame. Under-stimulated as an MI5 operative, Eve becomes fixated on the murder of a prominent public figure, which she maintains was committed by a woman. She’s correct; Villanelle is the highly effective international assassin finding more and more ingenious ways to take out her targets. Once Villanelle strikes a little too close to home, Eve is booted out of MI5, only to be recruited to a secret task force dedicated to finding Villanelle. The show depicts the ensuing cat-and-mouse game between the deadly international assassin and the motivated former MI5 agent on her tail. Both women are obsessed with the other, a story that can only end tragically.

Villanelle’s striking introduction is par for the course on this wonderfully stylish show. The show follows her through her escapades across Europe, from the gorgeous Italian countryside to the quaint Parisian streets. Comer is absolutely mesmerizing as Villanelle; she can shift from menacing to glib in the same scene. Villanelle has a wicked wit that draws a laugh whenever Comer delivers the lines in her pouty, somewhat-nebulous (ostensibly Russian?) accent. Villanelle’s penchant for lush, expensive items (often modeled off of her victims’ tastes) and the set design of her apartment contribute to a fully fleshed-out character, which Comer ties together expertly with her performance.

Perhaps even more of a revelation is Oh as the titular Eve. Oh imbues her with personality, making her eccentricities and brilliance both utterly believable and instantly engaging. Just watching Eve try to eat a croissant from a noisy paper bag is hilarious and relatable. Eve handles the sharp dialogue like a pro, giving every quip a naturalistic reading. Eve is endlessly watchable, with Oh anchoring the show with her leading performance. In a recent Vulture interview, Oh talks about the experience of finding out she was coveted for the lead role. She ruminates on how much she internalized the idea that an Asian or Asian-American woman could never be the lead of a television show. Given these anxieties, it’s impressive to see how she’s filled out the role and brings an incredible energy to it along with a general rapport with the cast.

Several other key players round out the cast: David Haig as Bill, Eve’s curmudgeonly mentor and friend; Fiona Shaw as Carolyn Martens, the well-respected and soft-spoken MI6 agent who recruited Eve to work for the off-the-books task force; Kenny (Sean Delaney) the task force’s computer genius (every task force has one); Kirby Howell-Baptiste as Elena, Eve’s snarky assistant from MI5 who comes along; Niko Polastri (Owen McDonnell), Eve’s unassuming and supportive husband; and Kim Bodnia as Konstantin, Villanelle’s occasionally volatile handler, sent from her shadowy employers. The entire cast is an excellent complement to Comer and Oh’s anchoring performances. Shaw is especially apt as the inconspicuous Carolyn Martens; it’s entrancing to watch her stillness. The characters of Kenny and Elena could use some development in these early episodes, but at least Howell-Baptiste is up to the challenge of inhabiting a meatier role. Both Comer and Oh’s rapports with their older male mentors is easy and charming—especially Oh and Haig—which allows the viewer to extrapolate the history of their respective relationships.

Something else that could use improvement is the show’s representation of queer people. Villanelle is shown as interested in men and women without any fanfare. While bisexual representation being depicted as not a big deal is nice, Villanelle is also pretty clearly meant to be a murderous sociopath, which doesn’t equal great queer representation. This is especially true for bisexual women who are often depicted as conniving and evil (see “Basic Instinct,” to start). Another character acknowledges his sexual fluidity (which is great!), but is almost immediately violently dispatched (which is less great) by the aforementioned villainous bisexual woman. Queer people deserve more explicit representation in ways that don’t perpetuate harmful stereotypes. “Killing Eve” should be doing better.

“Killing Eve” is executive produced by Phoebe Waller-Bridge, who also wrote the first two episodes. The star, writer, and producer of the Amazon series “Fleabag” brings her trademark dark wit to the series, which sparkles with clever banter about occasionally morbid subjects. Beyond dialogue, the show is gorgeous. “Killing Eve’s” soundtrack is absolutely marvelous, contributing greatly to the lush aesthetics. The show moves at a decent clip; by the end of the second episode, both Villanelle and Eve know who the other is, thanks to a chance meeting and hair advice. I’m fascinated to see where exactly this battle will end up, and I’m not certain who I’m rooting for: the sarcastic agent or the hedonistic contract killer. “Killing Eve” has already been renewed for a second season, but the end result of Eve and Villanelle’s dangerous game could easily be one of them on the gruesome receiving end of a wickedly sharp hairpin.