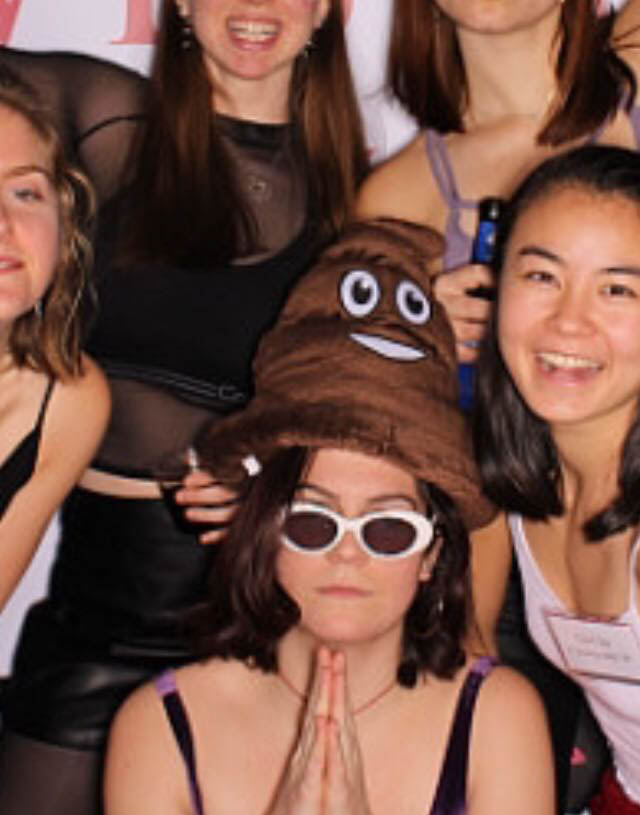 If you haven’t seen Liz Mitts ’18 around campus playing for the women’s Frisbee team, whipping up a smoothie at Pi, or organizing an event for The Wesleyan Comedy Committee, are you even a Wesleyan student? Liz’s outgoing personality and smiling face have not gone unnoticed here on campus, and it certainly got the attention of The Argus. We sat down with Liz to talk about her transfer experience, her most embarrassing moment, and how she became so passionate about her favorite band.

Liz Mitts: This is such a cheese-ball answer, but I feel like I’m a people person. One of my favorite things is meeting new people, talking to them. I think that transferring here helped me meet people. I love hanging out with people. Transferring allows you to meet people in a bunch of different groups.

A: We hear you’re pretty involved in Vicious Circles, can you tell us about that?

LM: When I was thinking about transferring here, Isaac Gotterer [’19], connected me with Sadie Renjilian [’17], who graduated last year. She transferred from [Scripps College] and she said she was on the Frisbee team here, and was also involved in comedy, which are two things that I really wanted to do, so she was like, “You should totally join.” Isaac also knew people on the team and they were like, “Join.” So I did, and thank God, because that became my main friend group and I live with girls who are all on the team now. I had no friends here, and then I joined, and everyone was so nice to me. I had never played Frisbee in my life, and now I’m a party captain with Sarah Dobrow [’18], one of my best friends. We literally just plan parties and it’s so fun. Frisbee’s been one of the best things that’s happened to me here, I love it.

A: Do you have a favorite memory while playing on Vicious?

LM: There are so many good ones. Last year we did really well—we won Regionals, weren’t expecting to, and then we went to Nationals. It was the week before senior week, so we didn’t miss anything important. Being with all these girls who we connected with, and had deep meaningful relationships with, we went to Nationals focusing on having fun and doing our best and not worrying about the outcome. We just kept winning. We were in the finals, and we got second. Being in the hotel with everyone and going to Chipotle and hanging out, it’s so fun.

LM: I’m also part of The Wesleyan Comedy Committee, and we bring professional comedians to campus. This year, we still don’t have it locked down yet, but last year we brought Aparna Nancherla and Marina Franklin, and that was super fun. We really just talk to agents and get comedians to come and ask the [Student Budget Committee] for money, and they’ve been pretty generous with us for being a new group. I also have met great friends through that. I also work at Pi, and I’m just, like, a barista there. I love working there because you just see a bunch of people and talk to everyone there, even though my bosses hate it and I get yelled at. Although, I swear I’m always doing work when I talk to people. I can multitask. I think that’s all I do, not a whole lot.

A: Any funny Pi stories you care to share?

LM: Any and all interactions with Alexa, I just love. It’s been great just screaming across the room to have Alexa play Moana or something like that, and then having everyone who’s in Pi kind of awkwardly look up and kind of laughing.

A: Is there anything outside of Wesleyan that you’re really passionate about?

LM: One Direction. That obsession has lasted. I started late in high school, because my little sister was a huge fan, and my mom was like, “Go to the concert with her so she has a guardian.” And I was like, “I’m 17, but I’ll go.” Sarah and I once went to New York for a concert, we drove from Massachusetts, and it was a three-hour drive, and on the whole way there, the only thing we listened to was all of the One Direction albums. At the end, we were kind of grumpy and didn’t want to listen to their songs ever again.

LM: I really don’t. I just want to work anywhere, and be hired, and be paid, and not live at home in my small, boring town.

A: What’s your most embarrassing memory?

LM:  The summer after sophomore year I was babysitting a cute little baby whose parents were in tech for a theater performance. We really hit it off the first few days until God decided to play his hand at throwing a wrench into our relationship. I was bringing the baby to his mom in the theater while tech was happening and I walked down a walkway that was normally clear and empty. Little did I know because it was pitch black that they had put stairs in the walkway for a set piece and I tripped hard on the steps with the baby in my arms. Tech instantly stopped and everyone crowded us and I have never felt a more overwhelming sense of relief than hearing that baby’s thundering cry. He was completely unscathed, thank the holy ghost. I had a couple of shiners on my forearms and shins but it was nothing in the face of that embarrassing moment. This might actually be more of a heroic story. I’ll let the readers decide.

LM: Spring break was so much fun. We had a spring break Frisbee trip, and we went all out, no holds bars. That’s definitely not a phrase, but that’s a phrase to me. That was a really good time to be with friends. We went to Myrtle Beach, we go every year on spring break. I’ve been applying for jobs, I have a few research papers I have to work on which sucks, but I’m really just trying to disregard my responsibilities as much as I can and just spend time with friends. I’m really trying to hang out with as many people as I can, and always aim for four nights a week. Always shoot high. It definitely doesn’t happen most of the time, but I’m close.

A: Do you have any advice for other Wesleyan students?

LM: I’d say, even if you’re like a junior or senior, and you want to do something on campus, just do it and try it. Also, branch out. I haven’t stopped meeting people since getting here, and one of the best parts of the school is that everyone is so open and friendly. Reach out to as many people as you can, and take classes that you love. Even if you’ve been doing a major or minor for a long time, and if you don’t love it and want to take something else, then just drop it. Spend your time doing what you want, no matter what. I know that that’s a selfish thing, but college is a time to be kind of selfish. In the right ways, be selfish. Oh, another thing—Wescamming all of the crushes. That’s a big thing. Reach out to your crushes while you still can.