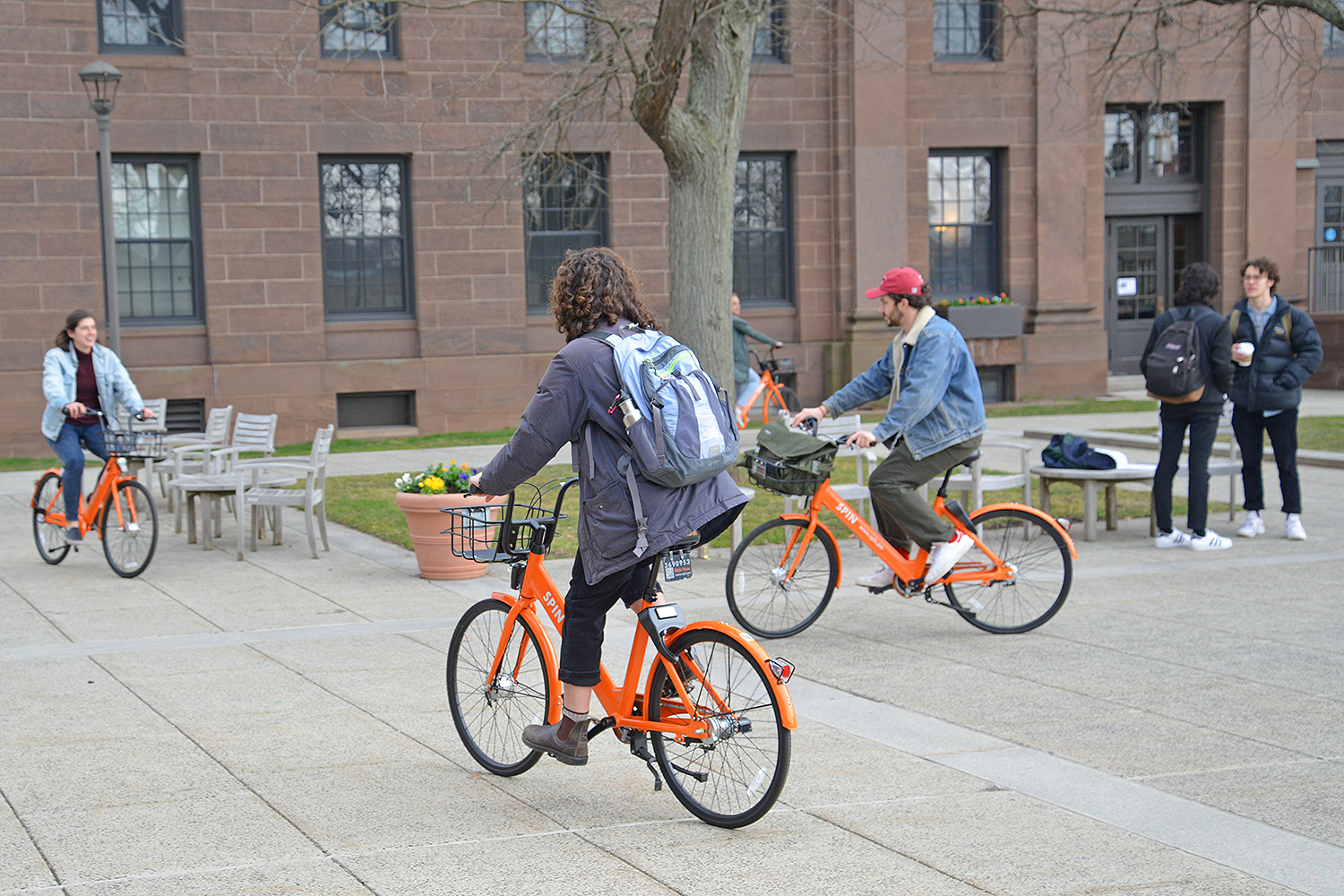 Have you seen the new bikes around campus? It’s impossible to miss them—they’re bright orange. The Office of Sustainability has partnered with Spin Bikeshare to bring rentable bikes to the University, just in time for Earth Day.

On this sunny WesFest Thursday, April 12, University students, faculty, and staff came to Foss Hill to learn more about the program, and get a chance to test drive the bikes for free. Spin Bikeshare hosted a raffle in which the first 25 people who downloaded the app and requested a helmet received one for free.

One hundred Spin bikes, identifiable by their bright orange color, are spread in various locations around campus. To operate the bikes, riders must download the “Spin Bikes” app and link a credit or debit card, use the app to locate a nearby bike, scan the QR code on the bike to unlock it, and begin the ride. The bikes must be locked on campus once the trip is over, otherwise users will continue to be charged. Spin Bikes, when parked, should never block building doors or campus roads and pathways. Bikes also need to “live” on campus—they can be ridden anywhere, as long as they’re returned to the on-campus bike racks by the end of the day.

Any University community member can pick up and ride a bike by either paying $14 per month for unlimited rides or 50 cents for every half-hour of use. Those without a University email address pay $1.00/30 minutes.

Why are bikes coming to Wesleyan now? The Argus sat down with Spin’s City Launcher David Wong and Sustainability Coordinator Jennifer Kleindienst to find out more about this new green initiative.

According to Kleindienst, ever since she started working at the University back in 2012, sustainability-minded students have been interested in bringing a bikeshare pilot to campus. Up until recently, however, available bikeshare programs have mostly been in the style of New York’s CitiBike: very pricey and difficult to implement because of the accompanying infrastructure.

“About a year ago, dock-less bikeshare started making its way onto the scene, and that’s when Spin approached me,” Kleindienst explained. “I thought to myself, ‘This seems too good to be true.’ They were offering bikes at no charge, with no additional infrastructure, and at reasonable price, too.”

Founded in San Francisco in 2016, Spin has already successfully implemented its bikeshare pilot program on 18 university and college campuses across the country.

The main environmental logic behind the new bikeshare program is to reduce the University’s carbon footprint by encouraging green methods of transportation. Instead of using cars or the shuttle, University students now have the option to use Spin bikes to travel around campus and to Main Street, which in turn may discourage students from bringing their own cars to campus. According to Kleindienst, the University and Spin may also have plans to bring electric-assist bikes and scooters to campus in the near future.

“The bikes will also encourage students to explore surrounding areas and get active!” said Katie Shewfelt ’20, who led the initiative to bring the bikeshare program on campus. “We saw that similar programs have been successful on other campuses across the country, and we want to bring the benefits here to Wes.”

The bikeshare pilot is targeted at students who are interested in riding bikes but who do not want to commit (or do not have the means) to bring their own bikes on to campus. Since managing a bikeshare program is rather difficult and time-consuming, Spin is hiring a University student to help run the initiative. According to Wong, the position will involve moving bikes around campus and confirming that all bikes are correctly locked.

Spin is the latest example of the University’s efforts to further integrate into the local Middletown community. The bikeshare company works with Main Street’s Pedal Power to help repair damaged bikes. Over the summer, the University and Spin hope to launch a small pilot program downtown, spreading the bikeshare program beyond campus’s borders.

Sarah Backer can be reached at sjbacker@wesleyan.edu.