Team IMPACT: Jake Egan Signs with Cardinals and Homers in First At Bat 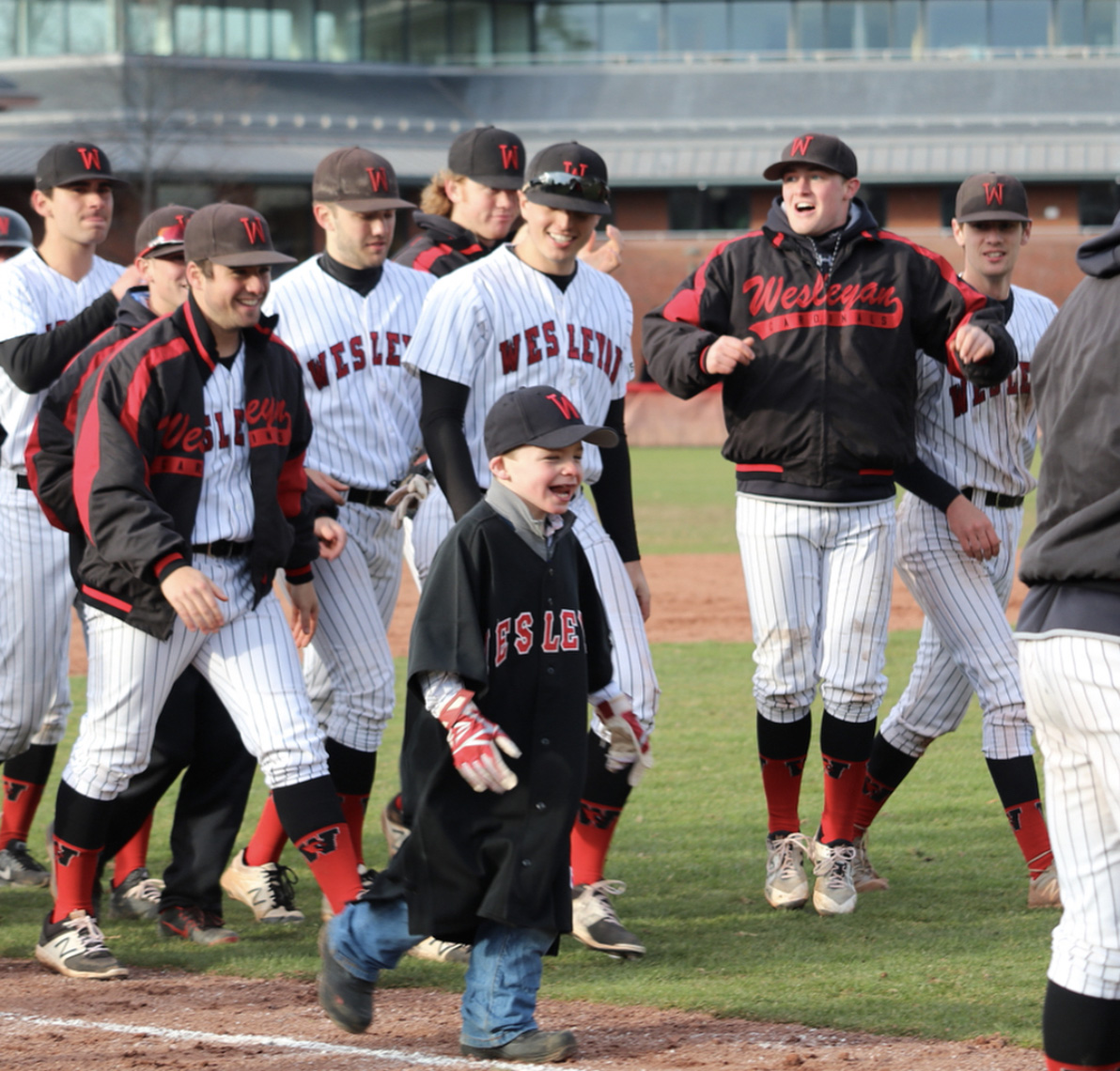 Last Saturday, the University baseball team added a new member to the team. Jake Egan, recruited through the nonprofit organization Team IMPACT, signed his National Letter of Intent to become a member of the Wesleyan Baseball team. Jake played for the Cardinals last Saturday, hitting a home run in his first at-bat.

Team IMPACT is a national nonprofit that connects children facing serious and chronic illnesses with local college athletic teams, forming lifelong bonds and life-changing outcomes. They do a wonderful job, as other University teams have recruited and signed young athletes from Team IMPACT.

Some members of that team that helped spearhead this project were juniors Ryan Earle, Pat Clare, and Mike McCaffrey, as well as sophomore Tanner Fulkerson.

“I originally heard of Team IMPACT when the football team was told there was a child in the area who loves football and baseball,” Earle said. “We signed him to the Wesleyan football team in the fall of 2016 and he has been at every Thursday practice since. Team IMPACT is amazing, and their goal is phenomenal. They couldn’t have been more helpful. When Mike, Pat, Tanner, and I were approached by a Team IMPACT liaison who said there was a local boy who loved baseball, we jumped all over the opportunity.”

There was a certain chemistry between Egan and the rest of the team as soon as they met. Egan’s smile had an immediate impact on the other players.

“We learned very quickly that Jake is an extremely happy and outgoing kid. He’s always smiling and did not take long for him to fit in with the team,” Clare said. “The Egan family emphasized how they want Jake to have a specific role on the team so from here on out we will be giving him various responsibilities.”

Egan also happens to be the Red and Black’s good luck charm. Every home game he has attended the Cardinals have been victorious.

In addition, there was a moment last Saturday that will never leave the memories of the team. It was truly special to everyone involved.

“Seeing Jake run the bases Saturday was one of the happiest [things] I ever have seen in a person,” Earle said.“The smile on his face and his laugh will forever be imprinted with me. From the beginning, we were told that Jake wanted to be a part of something that was his own. Now, he has his team and, as a team, running around the bases with him makes everything else seem so small. Sometimes, when you are playing poorly, you start to forget that in the end, it is just a game. And how fortunate we are to play that game every day. Wesleyan baseball is so excited to have Jake as our new teammate, and we want to welcome the Egan family to the Wes community.” 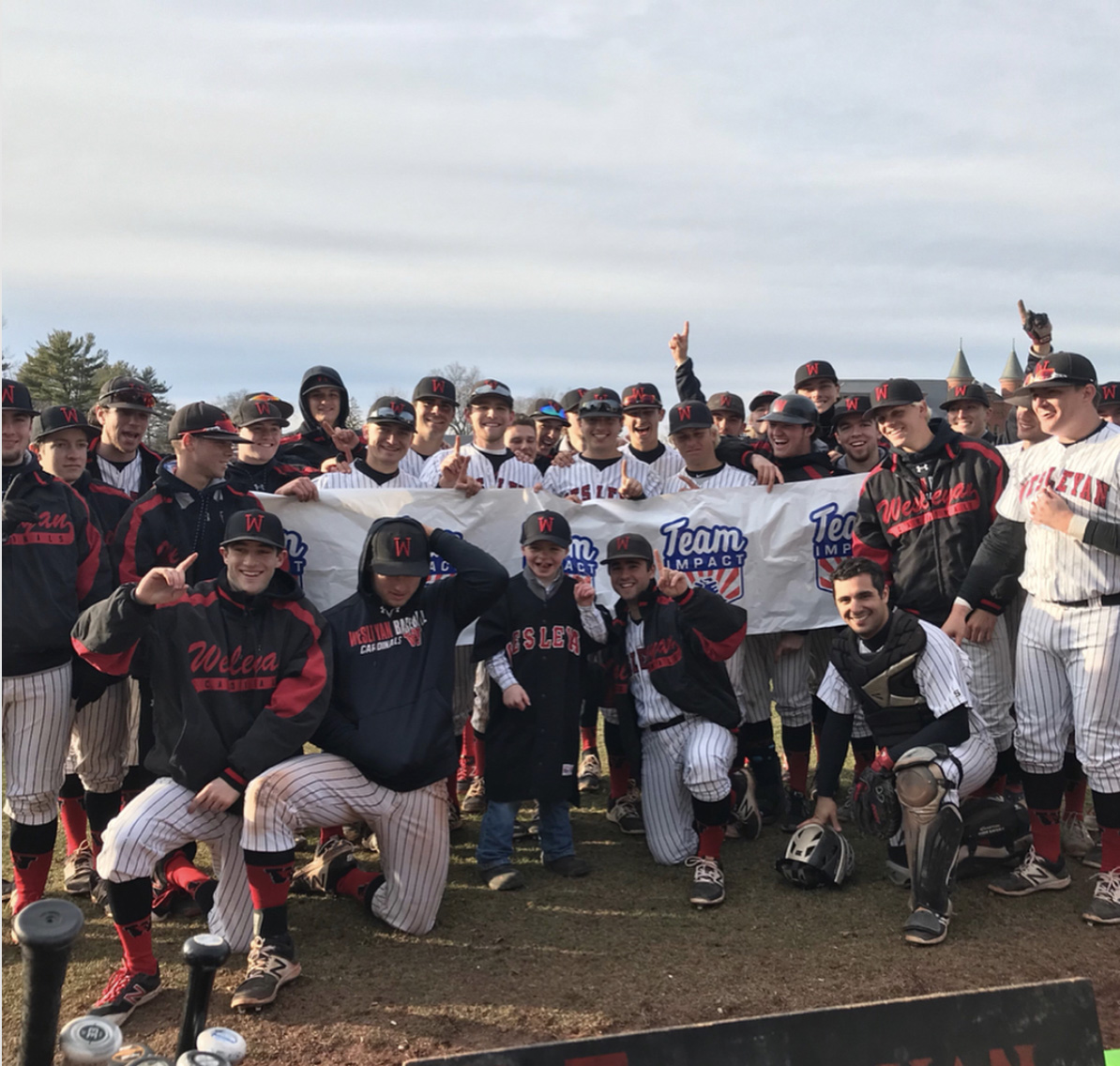 The team has high hopes for Egan outside of his life as a baseball player. The members love his attitude and know that he will bring that same positive energy to other aspects of his life.

“Jake is not a shy kid,” Clare said. “He introduced himself to everyone with a huge grin and made sure to give everyone a big hug. It was amazing to see more than 30 players and many more fans all caring so much about his big day. He deserved that moment in the spotlight.”

Baseball, especially for Egan, is more than just a game. What occurred on Dresser Diamond last Saturday was something indescribable. Giving an amazing, talented boy a chance to live one of his dreams is something that words cannot do justice. The players on the Wesleyan team play baseball every day. In practices and games, however, there are rarely times to contemplate how much the game means. Those who do not have this same chance to play regularly learn to appreciate the game more.

We wish the best of luck to Egan and welcome him to the University community. We hope to see him at lots of future baseball games and events.

Ben Owen can be reached at bowen@wesleyan.edu