McGlone ’18 Selected as Humanistic Study Fellow for the Paideia Institute 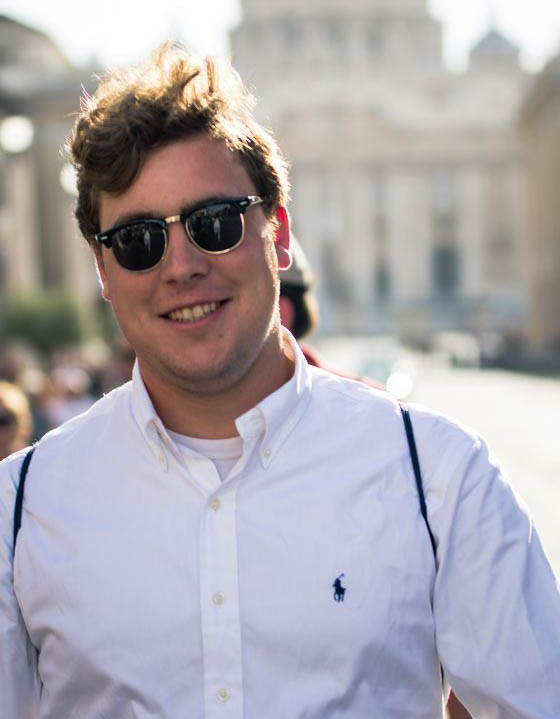 Brendan McGlone ’18 has just been selected as the Humanistic Study Fellow for the Paideia Institute in Rome to continue his post-Wesleyan education.

Founded in 2010, the Paideia Institute is a non-profit educational organization that works to promote the study and recognition of classical humanities, particularly those of Latin and Ancient Greek languages and literature.

Their website touts the Rome Fellowship that McGlone has just been honored with as an opportunity for their alumni to continue studying in Italy for an entire year after graduating. McGlone had previously studied with the Institute as a high school student and returned as an intern for the summer of 2017.

“Fellows receive round-trip airfare to Rome, training in Italian, and a stipend,” the website reads. “While in Rome fellows teach in Paideia’s high school programs, help the Institute develop programs and projects, and pursue their own independent research. Fellows are selected on the basis of academic merit, personality, and potential as a future teacher of Classics.”

McGlone is a triple major in College of Letters, Classics, and Medieval Studies. He is currently finishing a senior thesis and is set to graduate in May. Right now he is enrolled in an intensive one-semester Italian course to help prepare for his fellowship duties.

“The first couple months I’ll be learning the city and learning [Italian],” McGlone said. “There’s a homestay involved…. You do all that in preparation for teaching American high school students on one-week long classics-themed tours of Rome and of the Mediterranean. The American high school classes will go on their spring break, and I will lead them around, partially teaching, partially doing logistical work and helping them out on their trip.”

The fellowship will begin in September 2018 and conclude in August 2019. During the summer of 2019, McGlone will teach a three-week-long Latin class. It is modeled after one that he took at the Institute as an undergraduate but is instead geared towards high school students.

The aforementioned class that McGlone took at the Institute was part of the Living Latin in Rome Program. However, McGlone’s love of Latin and ties to the Paideia Institute go farther back.

“My older brother was a fellow when he graduated college,” McGlone said. “He had done the Living Latin in Rome Program before as well. He really loved it, so I applied for it as chance to both work on my Latin and do something fun with my summer. I fell in love with the whole program and institute and the way they go about teaching Latin.”

McGlone also credited his passion for Latin and his plans next year to the inspiration and tutelage he received from Jane A. Seney Professor of Greek and Professor of Classics and Environmental Studies Andrew Szegedy-Maszak, and Robert Rich Professor of Latin, Emeritus Michael Roberts.

“They are two of the best teachers I have had here and two of the best scholars I have encountered here as well,” McGlone said. “Professor Szegedy-Maszak has always been super helpful and encouraging in Latin and Greek. Professor Roberts works on more of the things that I am interested in, like Latin composition. Writing in Latin doesn’t happen that often. But it’s something that I’m interested in, and it’s something that the Paideia Institute is into.”

According to McGlone, The Paideia Institute’s pedagogy promotes active speaking and writing of Latin—something that he admires about the Institute.

“Essentially for a long time, Latin has been taught sort of like a puzzle, and you were told you had to memorize lots and lots of things and then piece together in order to translate old things,” McGlone said. “But our brains are made in such a way that we can understand languages really easily. Our brains are wired to understand languages, and that’s why language immersion programs are very successful, are the most successful for learning foreign languages.”

McGlone cites the example of being told to go to a Spanish-speaking country if you want to learn Spanish. If you immerse yourself and speak a language for a few months, you tend to become fluent.

“[Latin] developed the way every other language did,” McGlone said. “It was spoken, written, and read in an active way continuously for a couple thousand years. It seems to me that the best way to fully understand the language would be also to use it actively, through writing it and speaking it.”

Another aspect of McGlone’s love for Latin deals with his commitment to the Catholic faith. Latin is the language of the church.

“That is definitely one of the things that drove me to study it in the first place and drives my continuing study of it,” McGlone said. “It is the language that the church has been using since its inception. Using the language connects me to that tradition and just generally deepens and broadens my experience that way.”

McGlone expressed excitement about receiving the fellowship and the prospect of living in Rome.

“It is a really amazing city for a lot of reasons—the history, the art, the architecture—I could go on and on. I’ll get to live with real Romans for the whole year, doing a language. I’m really looking forward to getting to immerse in the culture.”

When McGlone interned at the Institute last summer, he befriended a local deli owner. The two have kept up their friendship, and McGlone is looking forward to seeing him again.

“I look forward to being reunited with him,” McGlone said. “I sent him a text actually. He just owns a place right around the corner from the office that I worked at last summer and will be working at. We went there most days for lunch. He helped me pick up some Italian words and stuff.”

Szegedy-Maszak is also looking forward to seeing what McGlone will accomplish in the next year as a fellow.

“[McGlone] has been a student in several of my classes, and I’m sure he’ll be an outstanding Paideia Fellow,” Szegedy-Maszak wrote in an email to The Argus. “For him Latin isn’t just a dusty puzzle to work on but a beautiful, challenging and rewarding language. We’re very proud of him, and we’re looking forward to getting updates from Rome. Maybe even in Latin.”