“Constance and Sinestra” Finds Connections in the Midst of Trauma 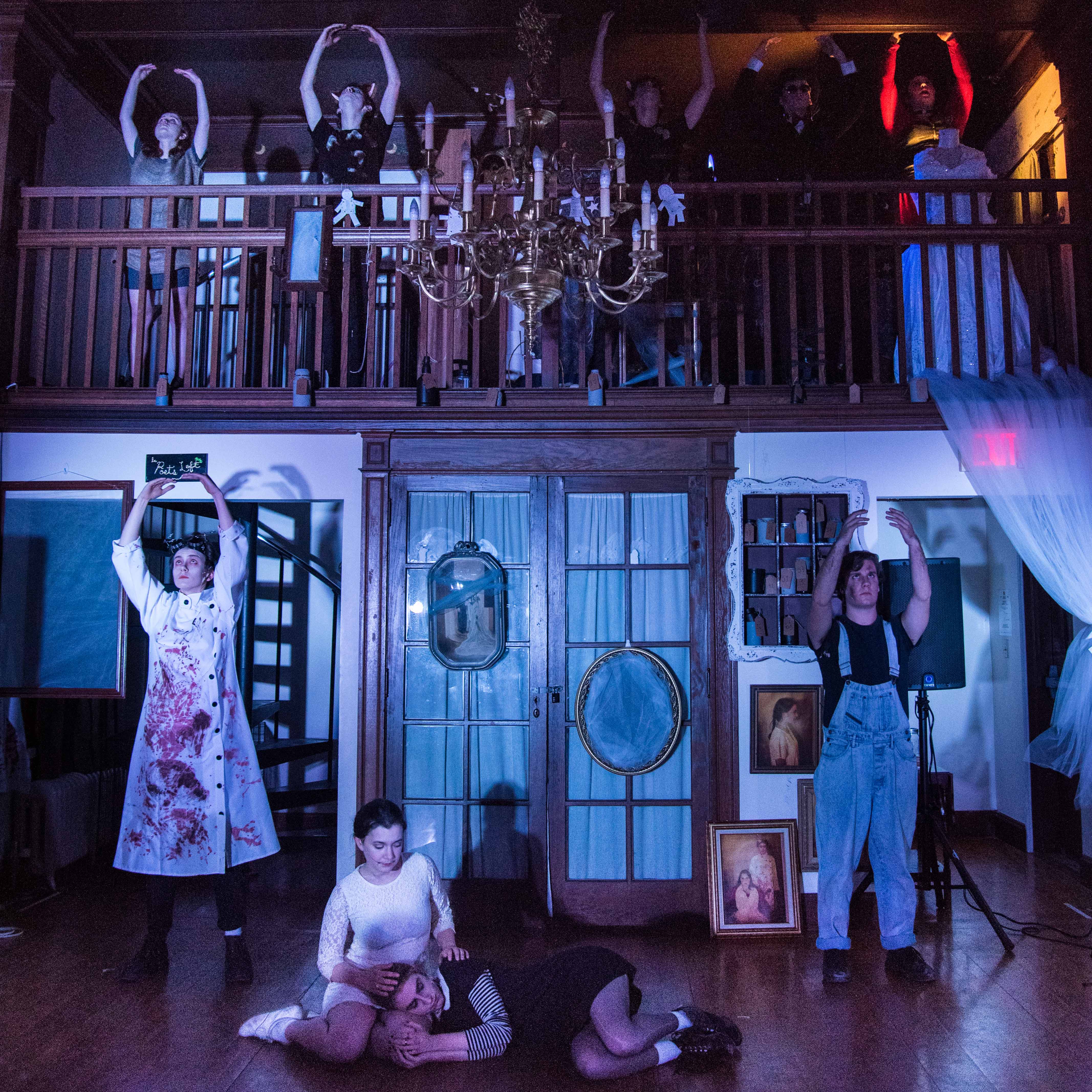 Walking into the Alpha Delt Green Room for Second Stage’s production “Constance and Sinestra and the Cabinet of Screams,” one might have thought they had walked into a haunted house. The entire cast of the musical stands facing the audience, gazing forward with blank stares while grim lighting and the sound of creaking floorboards only accentuates the level of creepiness. The strange opening tableau elicited a number of reactions as the audience settled into their seats: nervous laughter, uncomfortable silence, and the unnerving feeling of being both the observer and the observed. But more than anything, the blank stares offered an unrelentingly close connection between the actors and the audience. It’s a fitting choice for a play whose story creates increasingly grotesque, yet surprising, ways of probing the audience due to its own complicit relationship with this tragic fable.

The musical’s titular characters are sisters trapped in both a horrifying prison and a mausoleum of safety. Constance (Analiese Guettinger, ’21) lives seemingly content, never leaving her mansion perched on the edge of a cliff. She hasn’t stepped a foot out of the house since her mother’s funeral, and has no reason to, given that her mother’s stuffed body resides in the hallway next to paintings of their other ancestors. This is the handiwork of Constance’s father, “Mad Dad” (Elizaveta Kravchenko ’19), who ignores his daughters, and is driven insane by his obsession with taxidermy. Meanwhile, Constance’s sister Sinestra (Ramsay Burgess ’20) is busy scaring any stranger who stumbles into her sight, and collecting their screams into precisely numbered jars. Rounding out the family is the creature Hale (played simultaneously by Miles Brooks ’20 and Max Halperin ’20), a taxidermy experiment gone awry, which was subsequently turned into a house-pet and substitute guardian. 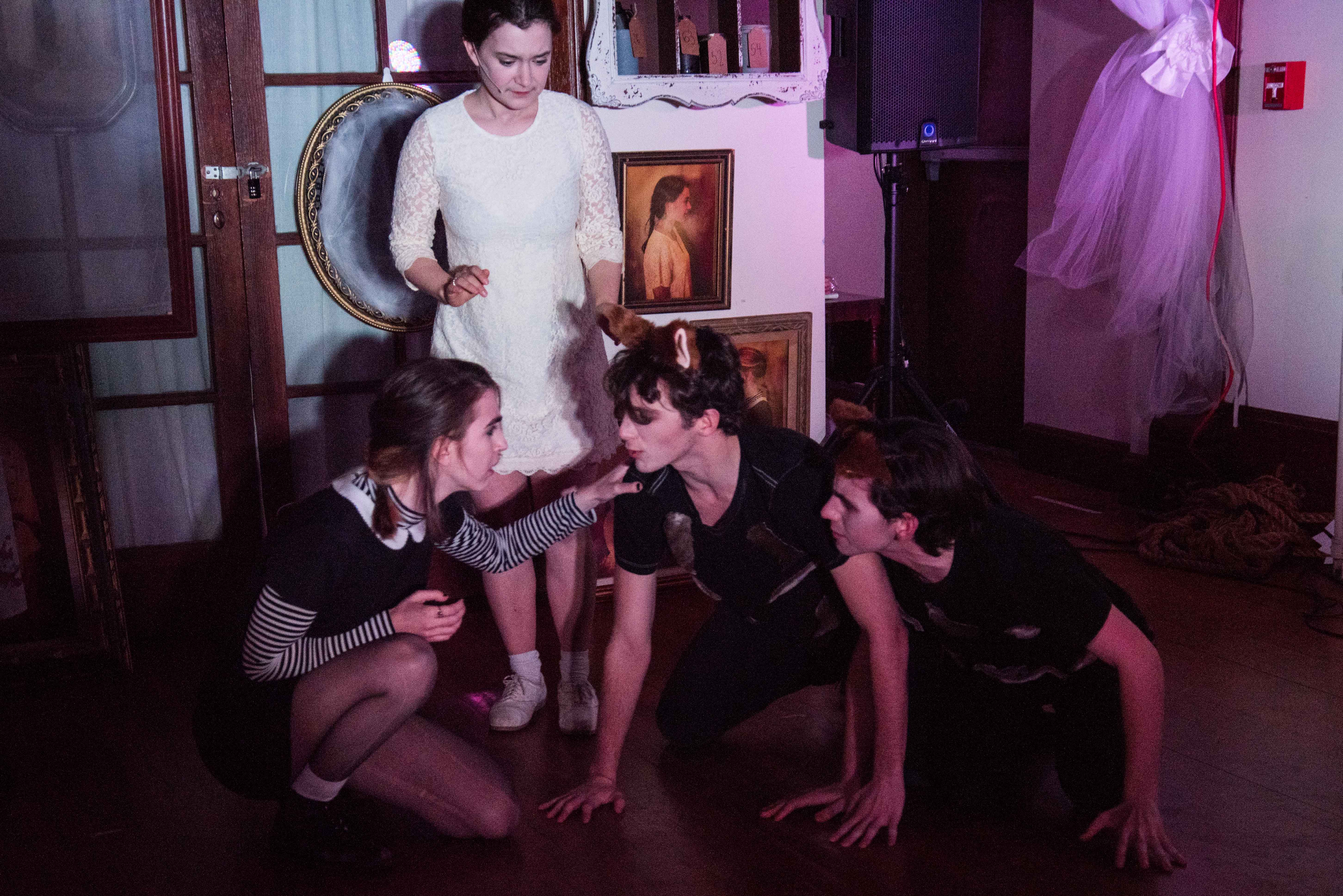 The relationship between Constance and Sinestra provides the emotional center of the show, following two young girls abandoned by the world,  seeking to survive without sacrificing their allegiance to their family. This strange push and pull—of being rejected by parents and still feeling the need to obey them—is brought out particularly well by Guettinger as Constance, who still imparts intelligence despite her bright, naive voice. Burgess also stands out as Sinestra when her yearning for an outside world conflicts with her isolated mentality, and her previously steely demeanor melts into childish hunger. Both actresses never downplay their feelings in the pursuit of portraying young characters, instead of giving their characters a strength in resisting their perilous upbringing. But, importantly, they still convey the vulnerability of growing up in a world that doesn’t understand or respect them.

Challenges to the sisters’ isolation arrive when strangers start to pry into the mansion. “Mean Girl” (Nicole Boyd ’18) throws rocks and curses the sisters, in reaction to her own experience with neglect at the hands of her mother. Her brother, Hereford (Sam Petersen ’20), is kinder, seeking to provide for his overstuffed family by working for Mad Dad in his taxidermy lab. But the primary takeaway from the mansion is the Van de Scabs, a family who set up a bakery down the street and whose stories of sugary cakes and delicacies enchant the sisters’ imaginations. Sophie Elwood ’20, who played Ophelia Van de Scab, was devilishly sweet in her bright red costume, making a world of maternal warmth dangerously seductive. Ben Russman ’21 portrayed the blind Victor Van de Scab, offering a nice counterpoint to his wife’s brashness, with a lovely, regretful tone to the show. Both characters come to represent different reactions to grief—heated anger and aching paralysis. 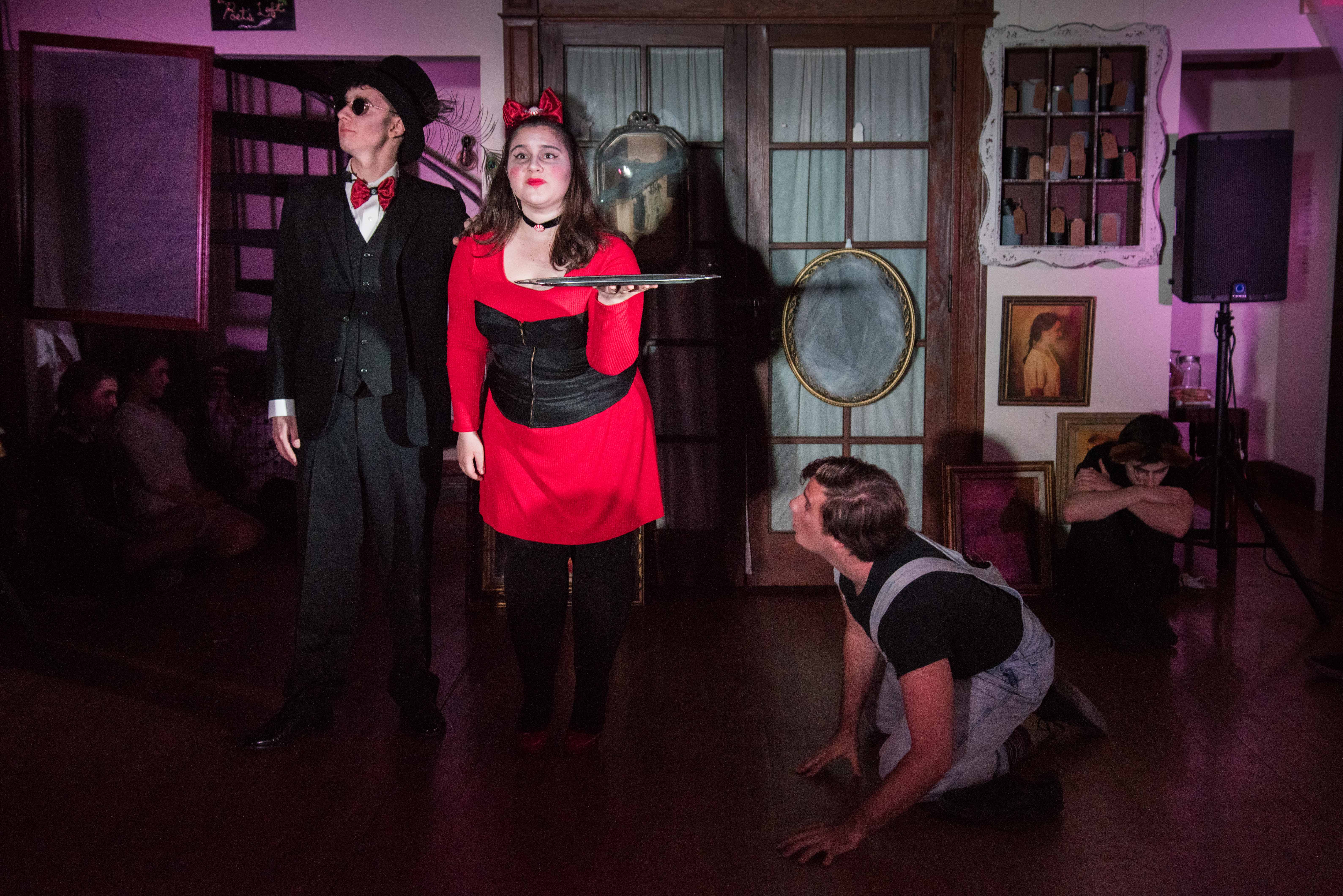 The musical, written by Patrick Gleeson and Alexandra Spencer-Jones, is consistently entertaining if somewhat derivative. At times it felt like a patchwork of favorite literary references rather than being its own unique story. Any English major could identify the influence of American Gothic literature, such as Edgar Allan Poe’s “The Fall of the House of Usher.” Similarly, the themes of the musical don’t stray too far from Stephen Sondheim’s work, from the dark exploration of childhood (“Into the Woods”) to the violent creation number (“Sweeney Todd”). Even the aesthetic and minor-key music could have been partially lifted from “The Addams Family.” In short, the musical struggles to escape the looming shadows of the cultural reference points to which it pays homage. What’s most disappointing are the romantic love triangles that start appearing midway through the show. The typical Broadway musical is built on stories of romantic unification, but do young children, dealing with death and destruction, have to face unrequited love as well? There are a few ironic nods to the absurdity of the romantic conceit, but they’re out of place for a show that takes the pain of its characters so seriously.

Luckily, this production’s unique theatricality refocuses attention to the sisters’ relationship. Under the direction of Ryan Dobrin ’18, the Green Room is transformed into a truly eerie stage, fully utilizing both levels of the space and the circular staircase connecting them. While the Green Room feels small, even verging on the claustrophobic, this works in favor of the themes of limitation and entrapment set by the parent characters within the show. Simple moments of inventiveness, such as the mother’s representation by an actress standing behind a flowing wedding dress, or an actor holding a picture frame in front of their face to represent a portrait, round out the mansion to make it a fully realized world. This is a case where less is more. Even when all of the music comes from a single piano player (David Vizgan ’21), once you buy into the show’s reality it feels completely natural. And when the sisters finally escape their mansion, and the proscenium style seating radically falls apart, shifting to a theater-in-the-round set-up, the results are as thrilling for the audience as they are for the sisters. 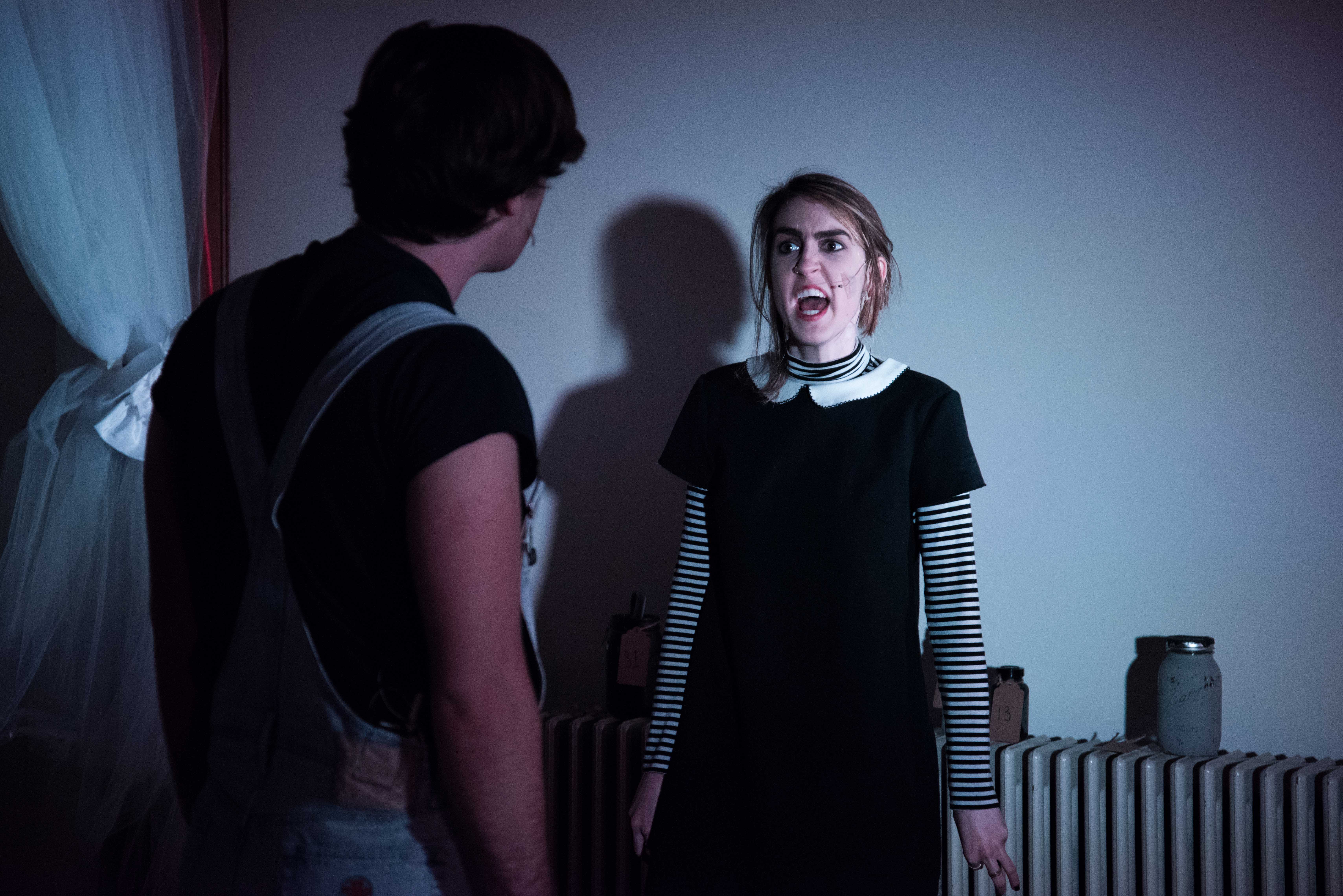 Despite the moments of theatrical play, “Constance and Sinestra” as a musical still seems like a work in progress. The incorporation of the cabinet of screams, Hale, and other minor characters don’t always pay off in completely satisfying ways. After this production, one might wonder how the show’s themes of internalized shame and fear might be deepened by actors of color, instead of the uniformly pale-looking ensemble this cast presents. But these are small grievances for a compelling night of theater that is unlike anything else Second Stage has put up this semester. “Constance and Sinestra” reminds audiences of the transformative power of theater: to reveal young girls saved by their devotion to each other, to unmask adults corrupted by their ignorance and self-loathing—to magically turn a small collection of props into an entire mansion with imagination. The audience is left realizing that as much as we look for guidance from the children’s story, it is really the children who are searching for guidance from us.

Nathan Pugh can be reached at npugh@wesleya.edu 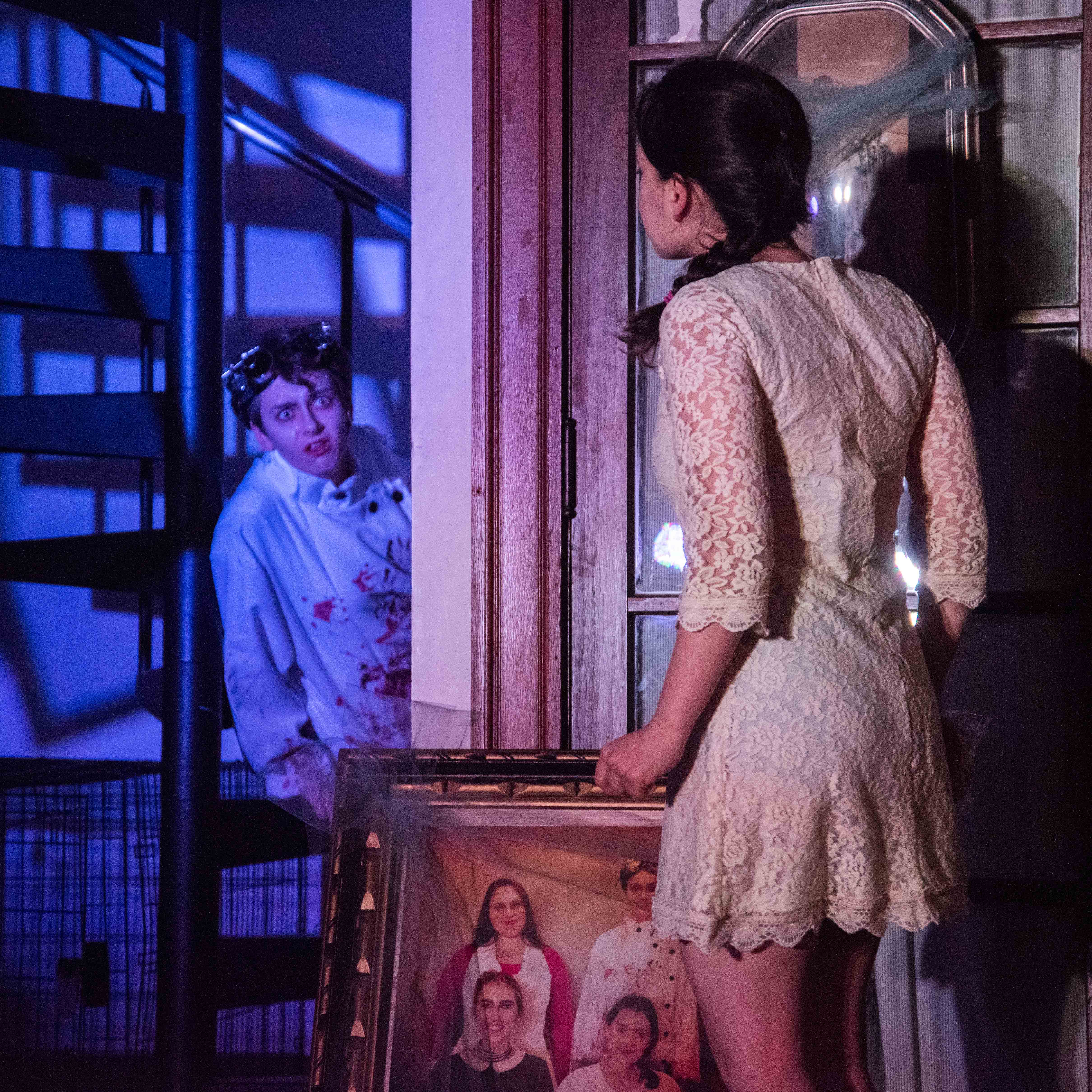