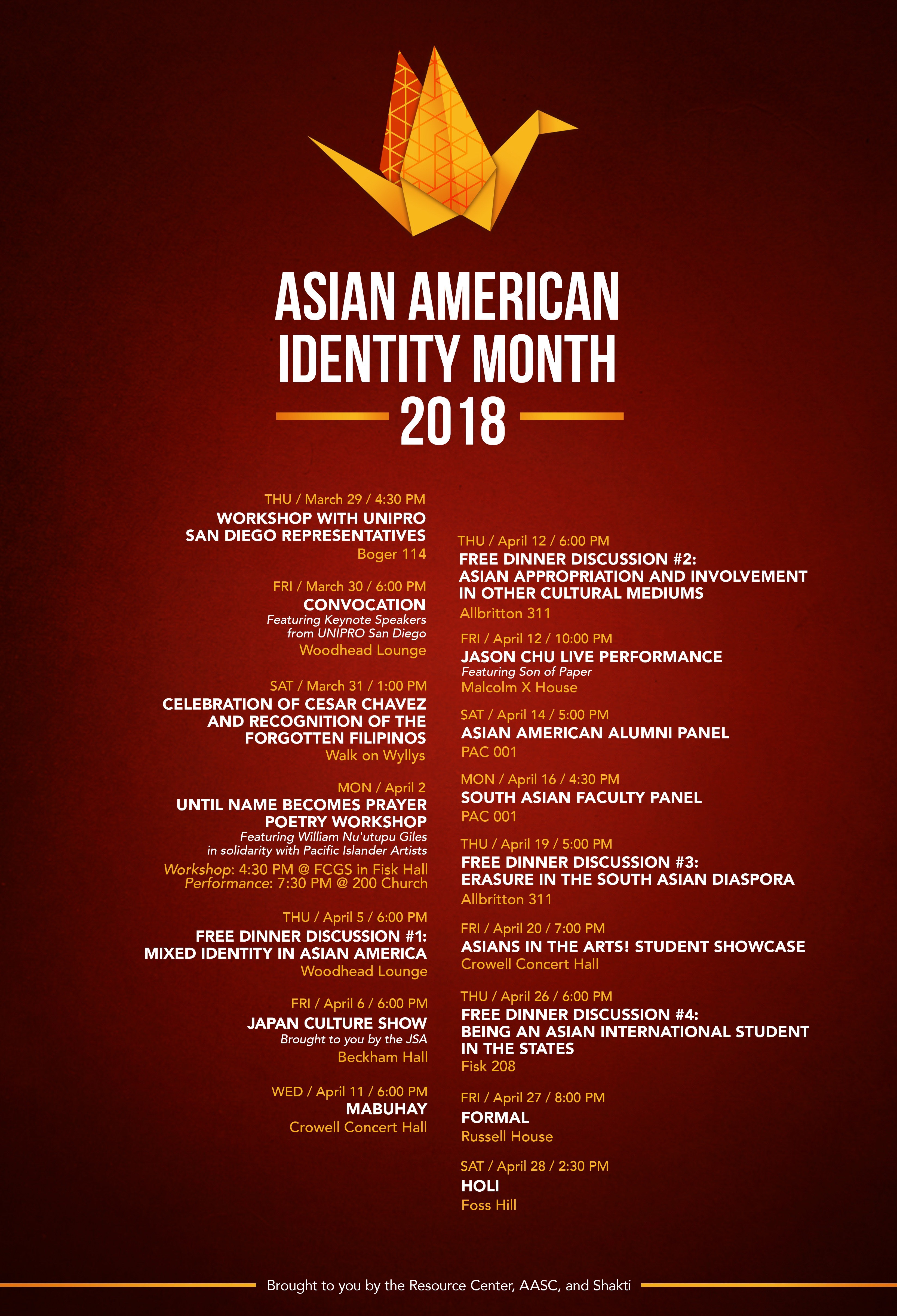 The Asian American Student Collective (AASC) and Shakti are holding a month-long celebration of Asian-American culture, identity, history, and activism from Thursday, March 29 through Saturday, April 28.

Events will range from a celebration of Cesar Chavez, to a poetry workshop, to a live performance from Jason Chu in Malcolm X House.

“Together, we will explore issues that affect Asian people living in America in the context of mixed identity, interracial relations, and what it means to be an international Asian student at Wesleyan,” the event’s Facebook page said.

According to Kyle Shin ’20, a board member of the AASC, the AASC and Shakti planned the month-long celebration from the beginning of last semester.

“We’ve been talking about it since fall semester, and we began reaching out to artists and speakers and all that different stuff in the fall and over winter break,” Shin said. “Essentially, we’ve been getting them contracts and booking them rooms and stuff, and reaching out to other clubs right since we got back. So, it’s been like a semester long process at least.”

The month will be comprised of sixteen events, but not all of the events will be run directly by the AASC and Shakti, a student organization which promotes South Asian culture and identities.

“There are other clubs’ events that we’re putting on,” Shin said. “For example, there’s the JSA’s Japanese Culture Show, which is this Friday. Another is Mabuhay during WesFest, which is an Asian Arts show. So, they’re not all run directly by us, but we run about half of them.”

The Mixed Identity Dinner Discussion, which took place on April 5, is one example of an event created in collaboration with another club.

“As part of Asian American Identity Month, AASC, Shakti, and other student groups are facilitating a series of free dinner discussions,” the AASC’s Facebook page said. “This week’s topic is Mixed Identity in Asian America, and is brought to you in collaboration with MIX Club, Wesleyan’s student group for students passionate about race and ethnicity through multi-ethnic, interracial, and cross-cultural lenses, including students of mixed heritage and transracial adoptees.”

While Shin is personally in charge of two events, he’s particularly excited about the “Jason Chu Live Performance.”

“He’s a Chinese-American rapper from Delaware that went to Yale and he now lives in L.A.,” Shin said. “He’s pretty well known in the community. He’s coming to X House on April 13, and I’m actually opening for him.”

Planning the celebration was hard work as the AASC and Shakti faced many obstacles putting it together, particularly when trying to acquire money, finalize contracts, and plan the events themselves.

“Even if you have the support of other clubs, getting money from all the different sources from campus can really be a big run-around,” Shin said. “Also, getting the contracts finalized and signed were a process that I’d never done before and there are a lot of ways that could be smoother in the future. I think next year we’re definitely going to start the planning process earlier, and maybe focus more on how we’re going to advertise instead of just having a bunch of events in order to get more people at each one.”

“I think there are a lot of misconceptions about Asian-American and Asian students on campus,” Shin said. “One thing that may be confusing for non-Asian students are that there are a lot of international students, which is not the case in most places. I live in San Francisco, so I’ve always had a strong Asian-American identity so having all these international students is actually very foreign to me. There are very big socio-economic differences, and there are things like terminology that is not easily accessible to our community. We’re talking about terms like ‘the Model Minority,’ or ‘internment,’ or ‘Angel Island’—all these important things, like Cesar Chavez day.”

Shin believes that this year’s work will make planning the month easier in the future as well as make PoC event planning more visible to the greater student body.

“I think we’re really trying to get people thinking about these things so that when we do ask for a larger department in American Studies or when we want to collaborate with other PoC. groups on campus, the process will be a little bit easier,” Shin said. “We’re really trying to get ourselves out there and hope that we can establish a yearly month at least.”