The softball team may have gotten the warmth of a traditional spring break, but they didn’t get the relaxation most of their peers did in the two weeks off from classes. After flying to Clermont, Fla., the team started their 2018 season with eleven games against various non-conference colleges, both DIII and above.

The season opened with a victory as the team managed a 4-0 win over Rensselaer Polytechnic Institute. Senior co-captain and starting pitcher Julie McDonald threw a complete game shutout to get the ball rolling on her final (and successful) Cardinal season. Ambitious rookies AyJay Mulholland and Danielle Rinaldi matched McDonald’s power with two hits apiece; Mulholland went on to score half of the team’s runs of the game.

This afternoon triumph was met with defeat later in the day with a 4-2 loss to Marian University. Mulholland struck again with a double to left field in the first inning, and moved to home after an RBI groundout to second by fellow first-year Marina Williams. The team’s younger members continued to excel as Rinaldi threw 11 strikeouts in her collegiate debut as pitcher.

The team didn’t have much time to rest as they faced a doubleheader on Thursday, Mar. 15. First-year pitcher Lauren Gaffney-Gomez notched five scoreless innings of relief during the team’s first game of the day, a 4-2 win against Lasell College. Gaffney-Gomez also excelled offensively, as she scored after co-captain Rielly Wieners ’18 hit the game-winning RBI single.

Unfortunately, the Cardinals’ success didn’t continue later into the day as they took a hit in a 3-1 loss against Olivet College. McDonald remained strong on the mound, denying the Comets attempts at getting on base by whiffing seven batters and keeping walks to a bare minimum. Maria Noto ’21 followed in her footsteps in relief, allowing only a couple of hits and two walks.

Losses continued with a 3-2 clincher against Babson College and a merciless 9-1 loss to Calvin College. Down 3-0 in the sixth, Wieners claimed a two-out walk, followed by a triple from Williams to allow sophomore Jo Jo Diaz to slide across home plate. McDonald decreased Wesleyan’s deficit by one, hitting a single that plated Williams from third. However, the team was unable to come up with a tying run, and left to face the undefeated Calvin Knights. 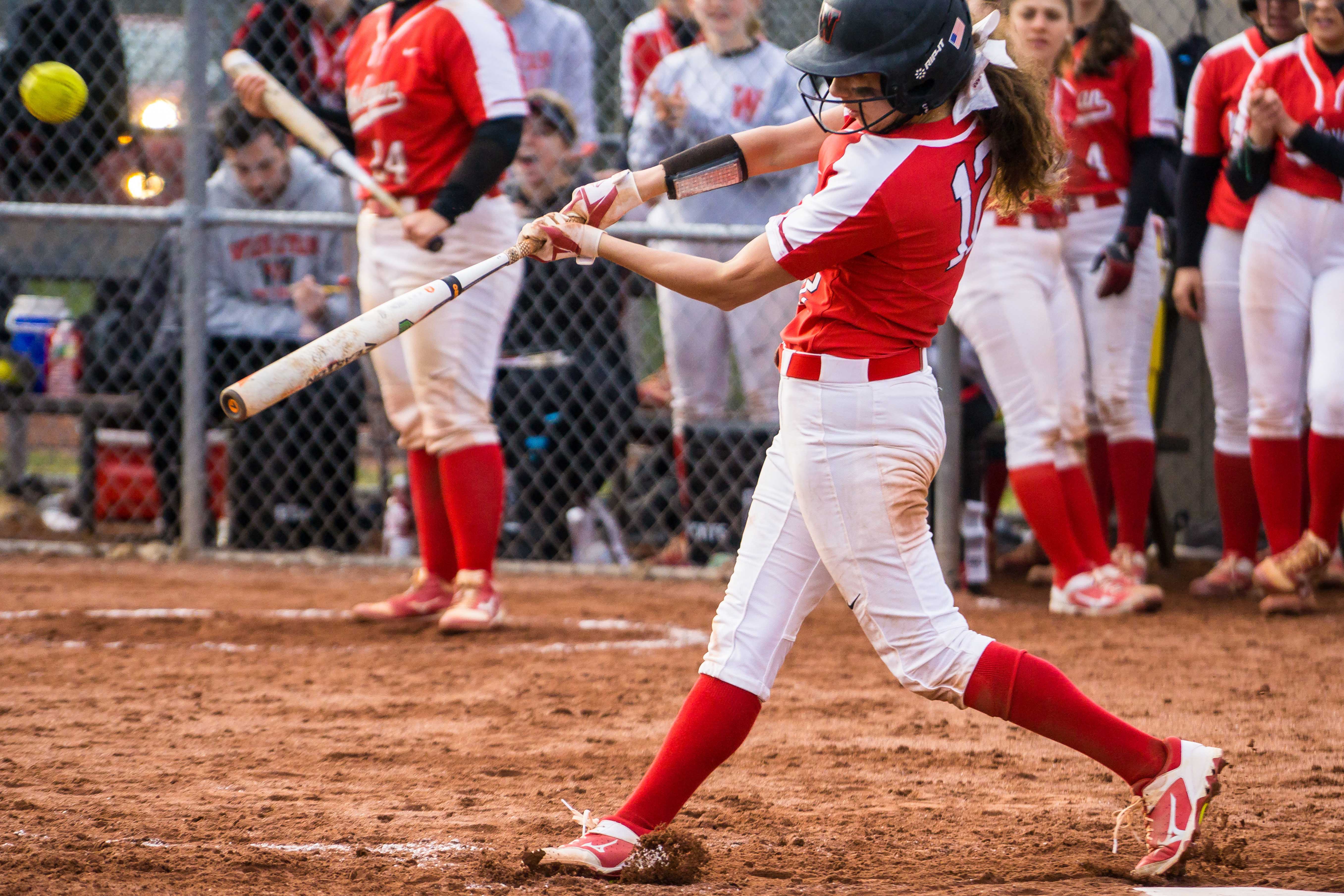 The Cards fended off the Knights for the majority of the game, as the game remained at a 1-1 stalemate going into the fourth. However, their stamina decreased as the Knights’ came out with a five-run effort in the fifth, and continued to post three more runs before ending the game with a victory in the sixth, with the Knights up 9-1.

Although the team suffered defeat the next day, they came close in a 5-4 nail-biter loss to The College of Wooster. Wieners once again hit a single to bat a teammate, this time Mulholland, to home plate. The senior continued her success to take a run around the bases, followed by Williams, who finished off the Cardinals’ 3-1 advantage. However, the Fighting Scots came back quickly to take a 5-3 lead by the bottom of the seventh. Junior Olivia Gorman responded with a triple, then crossed home just before Gaffney-Gomez grounded out to first base.

Later that Sunday, the team picked up a big win with a 5-0 victory over Elmhurst College and a complete-game shutout from Rinaldi. Sophomore Rachel Curran started off strong with an inside-the-park homer, scoring Alyssa Dasilva ’21 and giving the Cards a 2-0 lead. Junior Kendall Carr took the Red and Black’s third run in the fifth, followed by two more in the sixth: Gorman’s score after a single from Gaffney-Gomez, and Gaffney-Gomez’s trip to home plate off of Wiener’s connected RBI single.

The team got a chance to rest as the Florida storms picked up and canceled two games on Tuesday, Mar. 20. But the Cardinals were back in action just a day later, notching three victories against Clarkson, Wooster, and Lawrence University, respectively.

Against Clarkson, Noto gave up just six hits before the sixth inning, allowing three runs in total. Offensively, Wieners, Rinaldi, and Curran all managed numerous hits throughout the game with a total of three RBIs and two runs. The game ended in a close 6-5 victory over the Golden Knights.

Up next, Wieners performed her best of the spring break trip, going 3-for-3 at the plate, including a home run, and tallying her 100th career hit. On the mound, Rinaldi let in no runs on five hits and struck out seven players to take a 2-0 win against Wooster.

The last game of the day was contentious until the top of the eighth, when DaSilva ended the 3-3 tie against Lawrence with a two-run single to score Curran and Carr and gain the ladt tallies on their 5-3 win.

The Red and Black left the sunshine state with a 6-5 record, one which they have only improved upon since coming home. In a doubleheader against the United States Coast Guard Academy on Wednesday, Mar. 28, the team took home two victories: 6-1 then 4-3. In the first, Wieners opened up with a double, allowing Gorman to score from first. Rinaldi and Williams followed with singles, while fellow first-year Brenna Monroe notched a double and allowed both to score, bringing the Cardinals to a 3-0 lead. Monroe scored the team’s fourth run with a single by DaSilva, while Rinaldi and Williams wrapped up the final two runs in the sixth.

Hours later, the Bears fell once again at the bat of Wieners, who notched a single during a 3-3 tie to allow Rinaldi to cross the plate and make the game-winning run. The 4-3 victory takes the Cardinals’ record to 8-5 as they move into NESCAC play.

Their first ’CAC competitor is Amherst, who they’ll play three times in two days: once at Amherst on Friday, Mar. 30, and twice during a doubleheader at home on Saturday, Mar. 31.