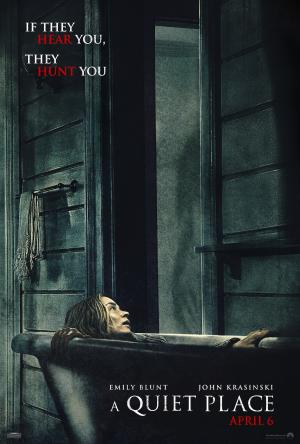 To promote his new film, “A Quiet Place,” writer-actor-director John Krasinski, best known for his role as Jim Halpert in the NBC sitcom “The Office,” took part in a Google Hangout interview with representatives from college newspapers across the country, including The Argus. The film, produced by Wesleyan alumni Michael Bay ’86 and Brad Fuller ’86, follows a family of four as they live in silence to avoid mysterious creatures that hunt and kill anyone they can hear. Krasinski stars as the family patriarch and performs alongside Emily Blunt (his real-life wife), and Millicent Simmons and Noah Jupe as their young children. With another child on the way, the family must learn to navigate and thrive in their new, dangerous world.

For Krasinski, the appeal of doing the film wasn’t its genre, but rather its focus on a family’s fight for survival. He first read the script after working with Bay and Fuller on the upcoming Amazon TV show “Tom Clancy’s Jack Ryan.” The two producers had their hands on the script by writing duo Bryan Woods and Scott Beck, who approached Krasinski to see if he’d be interested in playing the lead role. At the time, he was uninterested due to his fear of watching horror films. Still, when he read the script, he immediately connected with it.

“We just had our second daughter about three weeks before I read the script,” Krasinski explained. “And so I was already in the state of terror of keeping this girl safe, keeping this girl alive, and whether or not I was a good enough father…and in comes this script about a family that relies on each other, about parents that would do absolutely anything for their kids. So it doesn’t take a lot for me to cry, but I was wide open for this one and it connected to me in a big way.” 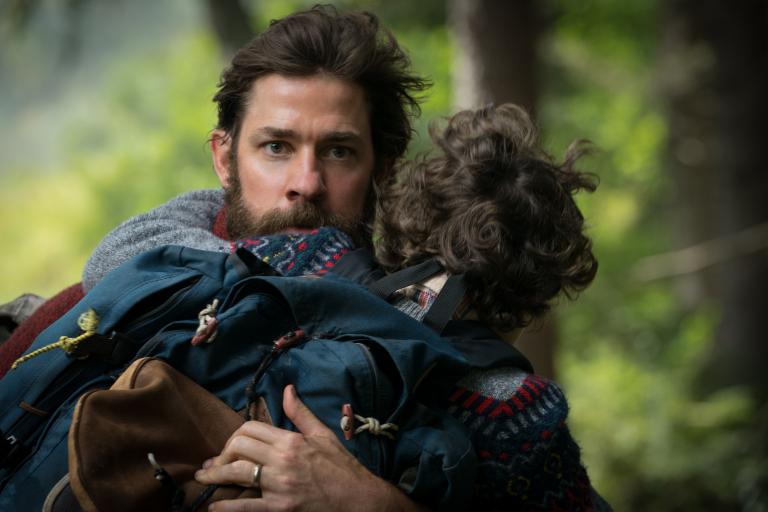 As someone who doesn’t watch horror films, Krasinski was nervous when writing and directing the film. Still, he saw his inexperience with the genre as a kind of bonus. Instead of focusing on genre conventions, Krasinski thought about what would scare him in a movie, and crafted the film accordingly.

Furthermore, he drew inspiration from critically-acclaimed horror films of the past decade, citing “The Babadook,” “Let the Right One In,” and “Get Out.”

“One of the things I learned very quickly, being someone who had never seen a lot of horror movies, is how ignorant I was, how stupid I was to stay away from these movies because I thought they would scare me,” Krasinski noted. “Especially nowadays, in the last few years, the fact is that genre movies are some of the best movies going.”

But Krasinski pulled inspiration from sources dating back decades and spanning genres.

For production design, Krasinski drew inspiration from an unusual source for horror: Westerns. Working alongside his Oscar-nominated production designer, Jeffrey Beecroft (“Dances With Wolves;” “12 Monkeys”), the two used classic Westerns as a starting point for designing the family’s barn, the main setting of the film. They hoped to create a setting that had a broad, sweeping feel to it, one that resembles classic Hollywood movies. 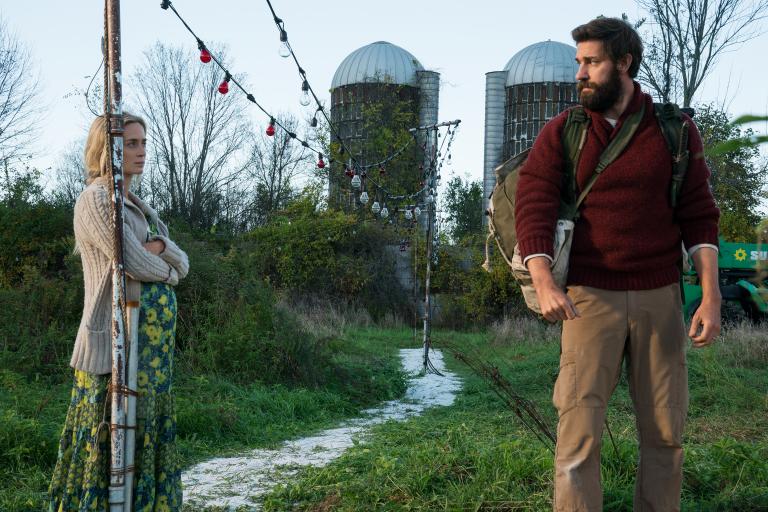 Of course, most directors and writers have the freedom to use as much dialogue as needed to tell their story; with “A Quiet Place,” Krasinski was forced to work with almost no dialogue, but still tell a compelling story with compelling characters. However, Krasinski believes this limitation actually helped him tell a better story.

“I got the rare opportunity to have a slow dance with my wife in this movie that you’ll see when you see [the film], and so much is being said in that one dance,” Krasinski explained. “If I had to write it as dialogue it probably would have been clanky and horrible, and instead there was something really beautiful about just getting to be in that moment. So I do think images are universal…. I mean people can all see it, and imagine themselves in that existence rather than [letting] the dialogue sort of get in the way.”

The emphasis on silence created another challenge: for the family to communicate, they have to use sign language, which meant the cast would have to learn it too. But Krasinski ultimately cherished this opportunity. He praised his co-star Simmons, who is herself deaf, for being a gentle and kind teacher. Krasinski’s only regret is that he didn’t learn more ASL, which he claimed was the most beautiful language. 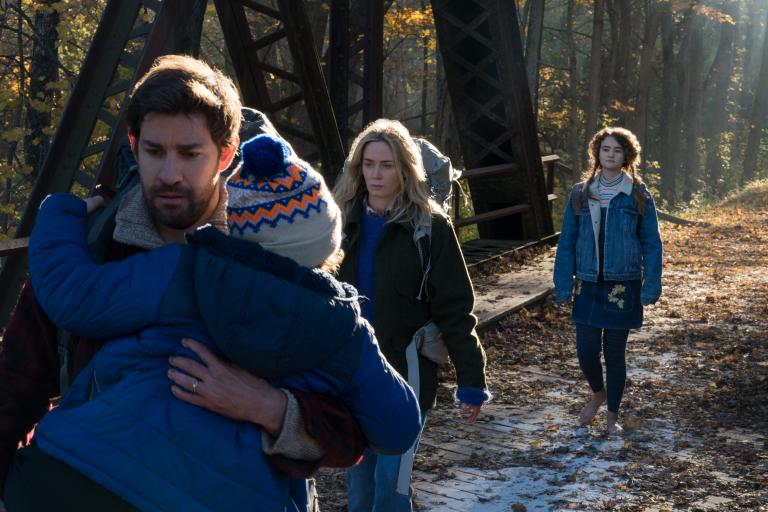 On working with Blunt, Krasinski repeatedly called the experience “amazing.” Blunt read the script while filming “Mary Poppins Returns,” (“Small little indie movie,” Krasinski joked) and became interested in the script for the same reasons as her husband. The focus on a family trying to protect themselves hit home for Blunt, who had just had the couple’s second child. While she had initially thought of a friend for the role, by the time she finished reading the script she knew she had to be in it.

While this is the third feature film Krasinski has directed, he says his experiences as an actor helped him work with his cast and create a comfortable environment on set.

“The truth is one of the best things about being an actor that directs is, I’ve seen all these other directors work so I know what works for me and what I really enjoy,” Krasinski explained. “The cool thing about being an actor and a director and where it benefits you is also I get to be in the scenes with them. So instead of being a disembodied head that yells cut and interrupts their flow, I actually get to be in there like we are right now, and tell them ‘You know here’s a little idea…’ or, ‘did you ever think of this?’ And so it almost becomes more like you’re doing a play. It’s kind of an intimate…special little bubble that we created.”

For Krasinski, the film was the definition of a passion project. He sees it not merely as a horror film, or a movie he enjoyed making, but a deeply personal tribute to his family. 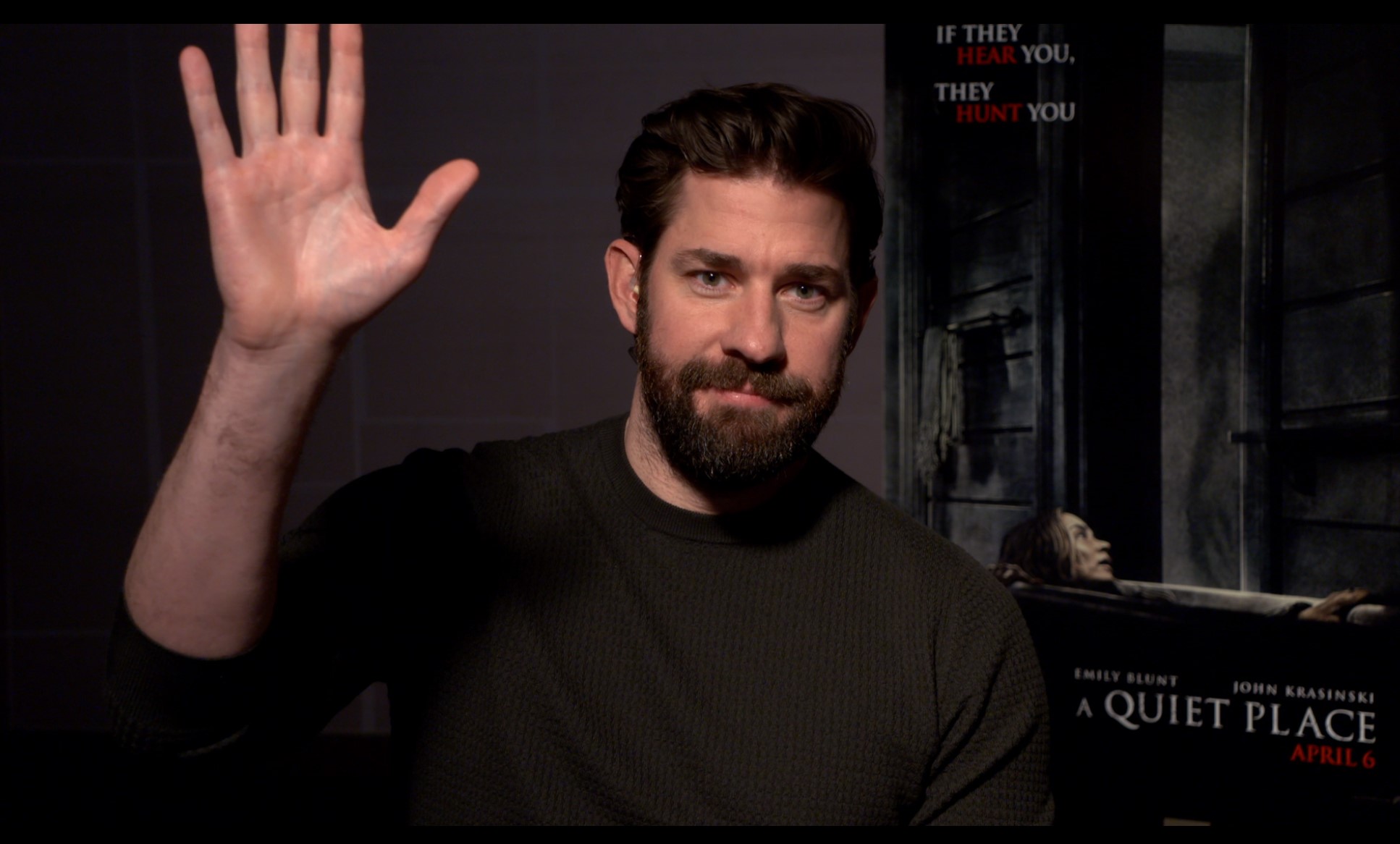 “I think that I’ve never gone so all-in before if I’m really honest,” Krasinski said. “This is the most I’ve ever put into a project not only as an actor-producer and writer and all those things but also as a person as a dad. I mean I think this is crazy as it seems because if you watch this trailer you will say, ‘what the hell is he talking about?’ But I think this is a love letter to my kids. So I was all-in, this is sort of everything that I wanted to say in [a] movie.”

“A Quiet Place” opens nationwide on April 6, 2018. On April 3, an early screening of the film will be held at 7 p.m. at the Goldsmith Family Cinema on campus.