Ada/Ava is a Tender Foray into Contemporary Silent Theater 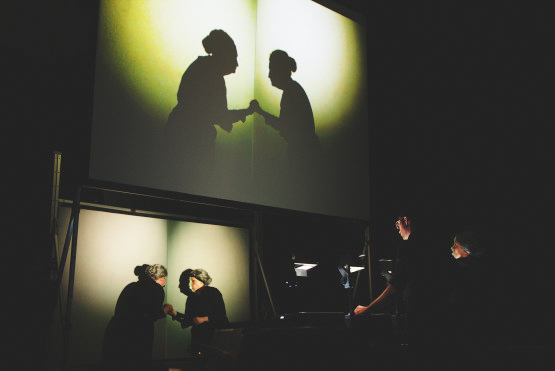 Ada/Ava, brought to the University by Manual Cinema this past Friday, poignantly and irrevocably destroys the traditional puppet show. The show centers around Ada (Julia Miller), an elderly woman who mourns the death of her twin sister Ava (Kara Davidson), and follows her surreal journey into the space between life and death alongside self and other.

Manual Cinema, a Chicago-based performance collective, design studio, and video production company purports to create live film on stage, but this description fails to adequately describe the innovation of its genre, starting with the set design.

The stage featured a large screen hanging downstage and several members of the troupe standing in front of projectors located mid-stage, who manipulated paper cut-outs on top of the projectors. Behind these projectors is a smaller screen, in front of which the two actors interact—their actions projected in reverse, swirling with the animation on the large screen.

One of the most cogent visual strategies used in the production is the reversal of the actors’ shadows onto the screen, such that Ada creates Ava and Ava creates Ada. At one point, Ada looks into the mirror and contemplates her reflection, only to reveal that her reflection is created by Ava’s shadow. The show thus delves visually into the idea of a double exposure of self, exploring ideas of codependency and seeing oneself through the eyes of another, as well as, in its darker moments, dissociation from oneself.

The narrative is tragic, funny, and ultimately incredibly fresh in the emotional territory that it explores, despite the complete absence of dialogue. The paper “puppets” are intricate and entirely made of black paper, extremely reminiscent of the dark humor and elaborate forms of Día de los Muertos decorations. Occasional splashes of animated pastel color—notably a surreal supermarket scene—briefly bring the audience out of the world of Tim Burton-style haunted house landscapes and into a more chokingly sweet kind of disorientation, all the more effective for the rarity of color used. This sweet/dark duality is an aesthetic that resounds throughout the piece.

The piece centers artistically on an intentional blurring of form, mingling animation and fine art in a way that, while it has been done before, is rarely done this well. The silhouettes bring to mind Kara Walker’s satirical, politically charged reclamation of the Southern Gothic trope, or else the moving picture book that Tateh creates on the streets of New York in the turn-of-the-century musical Ragtime. We see many standard horror tropes–haunted houses, mirrors, lighthouses, trees with spidery branches reaching to the moon. But each of these is created only to be dismantled—spliced, exploded, reversed, satirized, deconstructed in ways that are just subtle enough to be mind-blowing. Take a swirling ocean current washing over two sets of feet once, twice—a third time and now the second set is bones, before becoming feet again. The live accompanying cello lets out a haunting echo; the girl a few seats down an audible gasp. Or take two Picasso-esque foreheads, leaning toward each other in admiration, then competitive brutishness, then moving so close together that the forms are distorted and we are left with nauseating negative spaces that disorient the viewer.

The live music accompanying the show consists of three musicians who at times performed on various keyboards, cello, electric guitar and voice. If the show had been purely auditory, the audience would still have left more than sated. The musicians form a barren, vibrating landscape that can only be described as somewhere at the intersection of U2, Phillip Glass, and Amy Winehouse. The cellist plays at times with gorgeous romantic bow-strokes, at times with spacey atonal explorations. The vocalist, providing the only language in the show, easily could have become an overstated presence, but instead expertly navigates the territory between active cast member and passive creator of a mellifluous, textural backdrop.

Using the same projectors that might be recognizable in a middle school classroom, the show somehow manages to navigate a complex but easily understandable conception of grief and selfhood. We gain a sense of vulnerability from witnessing the creation of the illusion, which is graceful but imperfect; occasionally we can even glimpse the edges of hands holding puppets over the projectors. Every aspect of the form is as intentionally performative, arbitrary, and removed as the process of mourning itself. Sometimes we see these rituals of mourning literally, such as when Ava drapes a mirror with a cloth. The covered mirror explodes across the home like spilled ink, and we bear witness to the failure of this intentionality—the superficiality of ostensible control over one’s grief.

The show’s exploration of place is also indelibly felt, as we see the ways in which familiar spaces can be brutally haunted by memory. Our vision of the deceased sometimes comfortingly floats into our lives—a ghostly hand makes its move on the other side of a long-abandoned chessboard—and sometimes fractures our psyches. The house, with its Victorian wallpaper and framed silhouettes, is broken into vertical splices that shake with the rhythm of a panic attack.

Somehow, Manual Cinema achieves all of this in a way that is shocking but ironic, sweet but never too sweet. They are ambitious in scope but also incredibly self-aware. And they do all of this in complete wordlessness, which is perhaps what truly shakes the puppet show out of its characterization of jokey craftiness and into one of somber, delicate introspection.