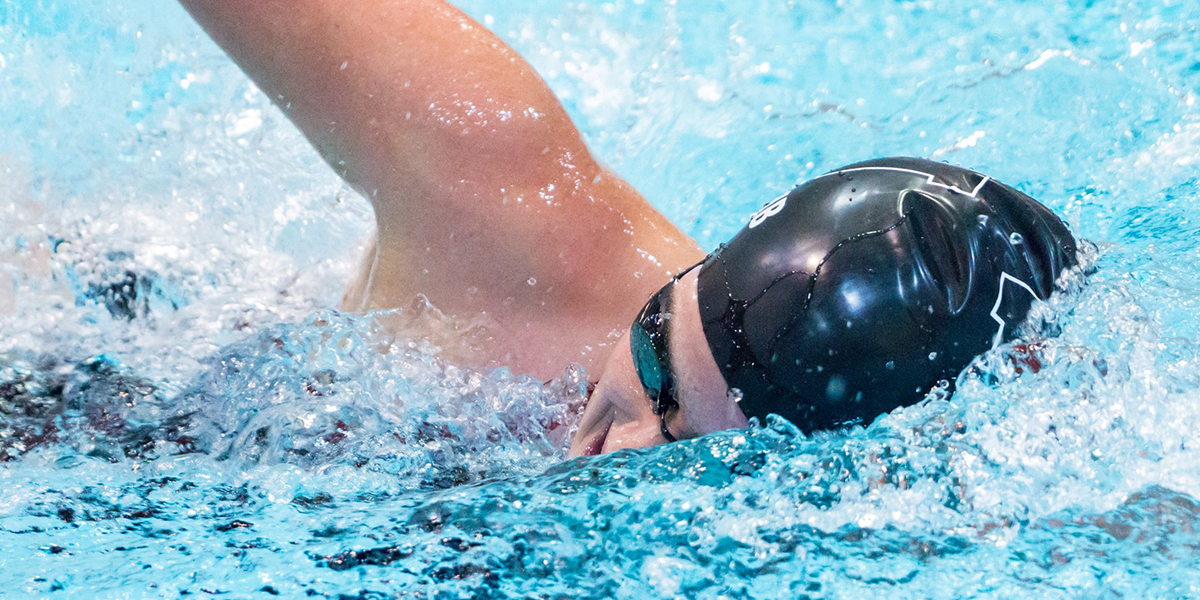 After a seventh-place finish in the 2016-2017 NESCAC campaign, the best for the program since 2008, the women’s swim and dive team plunged into the 2018 conference spanning Feb. 16-18 with high hopes.

“The diving team prepares for NESCACs a little differently than the swimmers,” junior diver Devon Cooper said. “Instead of tapering off, our practices actually get much harder and longer. This helps us prepare to maintain our mental toughness and also our endurance during the three-day NESCACs.”

Holding a 1-4 NESCAC record and a 4-9 overall record, the swim and dive team’s highlights often come from individual members, who aren’t strangers to breaking records and taking top-three titles. Although the team took an eighth-place finish this past weekend, members among them broke four school records, earned All-Conference and All-NESCAC honors, and posted NCAA “B” Consideration and NCAA Regional Qualifying Standards.

The three-day affair started strong with success in individual and relay swimming events and individual diving events. In the 400-medley relay, Caroline Murphy ’20, captain Z Kerrich ’18, Maela Whitcomb ’19, and Hannah O’Halloran ’20 finished sixth in 3:52.03, collectively earning an NCAA “B” Consideration Standard. The relay’s members continued to excel in individual events, as Murphy earned a first-place notch in the 50-yard backstroke, gaining All-Conference honors and effectively defending her NESCAC title from 2017. Kerrich smashed two records: one, during the preliminaries of the 50-yard breaststroke, that was over a decade old, and the other in the consolation final of the 200 individual medley. Whitcomb beat her personal record by 14 seconds in the 500-yard freestyle, placing seventh during the championship final. On the diving board, Cooper performed superbly in the 1-meter event, breaking Wesleyan’s 1993 record with a 397.60.

“My NESCAC performance was more than I could have asked for this year,” Cooper said. “My teammates were so incredibly supportive; I couldn’t have made it through the weekend without them.”

On Saturday, Feb. 17, the Red and Black furthered their success with more program-historic moments, honors, and qualifying standards. Friday’s relay team continued to thrive, this time in the 800 freestyle relay. The Whitcomb, Kerrich, O’Halloran, and Murphy team swam a program best, finishing in 7:44.50. Whitcomb nearly grabbed All-Conference honors during the final of the 1,000 freestyle, yet missed the podium with a fourth-place-finishing but impressive 10:26.52 mark. Murphy transcended her success from the 2017 NESCAC Championships and claimed the top title in the 100-meter backstroke, a move up from her second-place finish in the past year. This performance earned her an NCAA “B” Consideration Standard and All-NESCAC honors.

As the last day of competition finally arrived, the Cardinals fought against exhaustion and notched individual strong efforts. Murphy and Kerrich swam in the championship final of the 100 freestyle and the 200 breaststroke, placing fifth and eighth overall, respectively. As Kerrich also placed seventh in the preliminaries of the 200 breastroke, Whitcomb competed in the finals of the 1,650 freestyle, taking the eighth-place slot in 17:31.43. Diving events rounded out the competition as Cooper placed fifth in the preliminaries during the 3-meter event. Cooper and captain Emily Kessler ’18 later participated in the championship final of the event, taking seventh and eighth, respectively.

The Cardinals finished the weekend with a total of 725 points, earning them eighth place out of the 11 NESCAC teams. Their finish was 101 points behind Middlebury, in seventh place, and 281.5 ahead of Trinity, in ninth place. Host team Williams didn’t travel far to take home first place, with a final score of 1,971. Williams has dominated not only NESCAC play, but also Little Three competition, taking home 35 of the last 40 Little Three titles since the 1978-79 season. Amherst has taken home four, while Wesleyan is yet to take home the title.

Despite the eighth-place finish, the meet ended with two All-Conference honors, two NCAA “B” Consideration Standards, one NCAA Regional Qualifying Standard, and one All-NESCAC honors. These individual records are a product of not only the athletes’ dedication, but also the hard work of head coach Peter Solomon. Solomon has been named NESCAC Coach of the Year eight times, including an honor for last year’s season on the women’s side.

While the men’s swim and dive team gets their chance at NESCAC competition during championships on Friday, Feb. 23, the women’s team travels next Sunday, Feb. 25 to Bowdoin for the Women’s February Invitational, one of their final competitions of the season.

“As the season draws to a close, I am looking forward to jumping into Water Polo season,” Cooper said. “Many of the swimmers all come together and play on Wesleyan’s club water polo team, so it’s a nice way to stay in touch and stay active. Other than that, I’m excited to have a little bit more down time to relax and to help work on theater projects for Second Stage with my friends.”