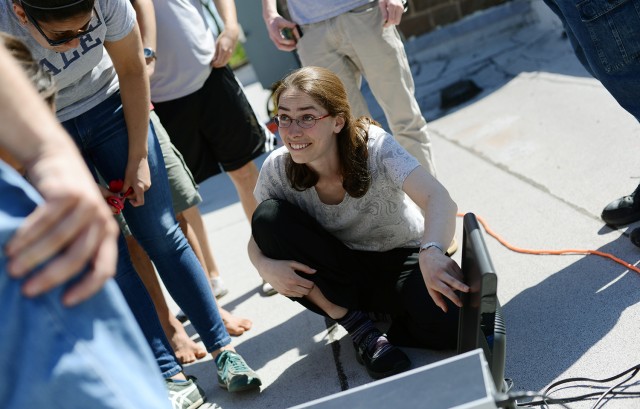 In January 2018, Assistant Professor of Astronomy and Integrative Sciences Meredith Hughes was named a Cottrell Scholar by the Research Corporation for Science Advancement, which funds projects in chemistry, physics, and astronomy. Hughes has worked at Wesleyan for five years and is a graduate of both Yale University and Harvard University. She was just named one of 24 Cottrell Scholars and was awarded $100,000 to fund her research and teaching.

“I always enjoyed doing nerdy things as a little kid, and my grandfather worked on early computers and would show me the codes he would write, like simple cryptographic substitution codes, and I thought that was really neat,” Hughes said. “I think he got me interested in science things before I realized that science wasn’t cool, and maybe specifically that science wasn’t cool for girls.”

Late in high school, Hughes participated in an astronomy summer program, through which she met professional scientists and got to work on various research projects, which got her hooked on space. During college, she tried to make sure that she explored other interests but says that she always came back to astronomy.

She started teaching at Wesleyan after completing her graduate studies.

“I really love Wesleyan students—they’re very curious, and they have a lot of different interests, and there’s a sense of exploration among our students here that I haven’t encountered at a lot of other places,” Hughes said. “I love that some of our astronomy majors are also art majors, or religion majors…. It’s really fun to teach students who are interested in so many things, and who ask really great questions.”

As part of the award, Hughes will be teaching a course entitled “STEM Equity and Inclusion” in the fall. The course will have two components: a weekly seminar on topics such as implicit bias that relate to equity and inclusion in STEM, and student-written proposals for activities that improve inclusion in STEM on campus. Students will evaluate each others’ proposals, and the ones that are the most favored will receive some funding from the award to aid in its implementation.

“I know there’s a ton of energy on our campus already directed towards increasing STEM equity and inclusion at Wesleyan,” Hughes said. “My real goal in developing this course is to give students who are already doing this work a source of academic credit and funding for what they’re doing. So students from [the Society for Underrepresented Students in STEM], the NSM Coalition, WesWIS [Wesleyan Women in Science], and [Wesleyan Mathematics and Science Scholars], all of these students are already doing really great work, so I just want to help them focus their efforts and help them to actually make those ideas turn into reality.”

Over the course of her career, Hughes has attempted to confront issues with equity and inclusion in STEM head on.

“There are definitely still biases and barriers that hold back certain groups of people from succeeding to their fullest potential in the sciences,” Hughes said. “I think that’s a real shame, we miss out on a lot of talent that way. I’ve tried to work on these problems a lot throughout my career.”

Hughes is the faculty advisor for WesWIS and organized Wesleyan’s 2016 Conference for Undergraduate Women in Physics with Physics Professor Christina Othon. She has served as an organizer in and member of various groups that promote inclusion, such as the Astronomy Anti-Racism Group and the Committee on the Status of Women in Astronomy for the American Astronomical Society. In her work with the committee, Hughes participated in collecting and studying the most recent demographics surveys to track how many women are at different levels of the astronomy career pipeline.

“I’ve really been trying to think about this problem of equity and inclusion in STEM, specifically astronomy, but I think a lot of the things I’ve learned also apply more broadly to other sciences,” Hughes said. “Thinking about it in an intersectional way, I hope, will be something useful that I’m able to bring to the course.”

Hughes also addressed how she was unable to apply for the Cottrell Scholarship award previously due to health problems that her newborn son faced right before the deadline last year, which consumed her time. However, the foundation has a policy that allows applicants to delay their proposal for a year if they are on parental leave during the year that they are eligible for the award, which she used to win the scholarship the following year.

“I actually think that my story is a really great example of the way that family-friendly policies work well in science,” Hughes said.

Hughes’ proposal to become a Cottrell Scholar also included a research-based component, which centers on her study of debris disks—dust and debris that orbits around stars.

“[The measurements we are making are] aimed at understanding what other solar systems are like: do they have Uranus and Neptune analogs, and what is the dust that makes up the planets like?” Hughes said.

She also offered some advice for students who are considering a foray into astronomy.

“If you’re interested in doing astrophysics, I think that some people have this perception of astronomy as, you go outside and look at stars, and it’s all very chill,” said Hughes. “But in reality, it’s a very quantitative, physical science.”

“Don’t get discouraged if things take a long time because they’re supposed to,” she said. “This is how research projects in academia and specifically astronomy work, and it can be really rewarding to carry that idea through to completion, because then you’ve learned something that nobody else in the history of humanity has ever learned before. It might be a very small and technical something, but you’ve increased human knowledge, and that’s really cool.”