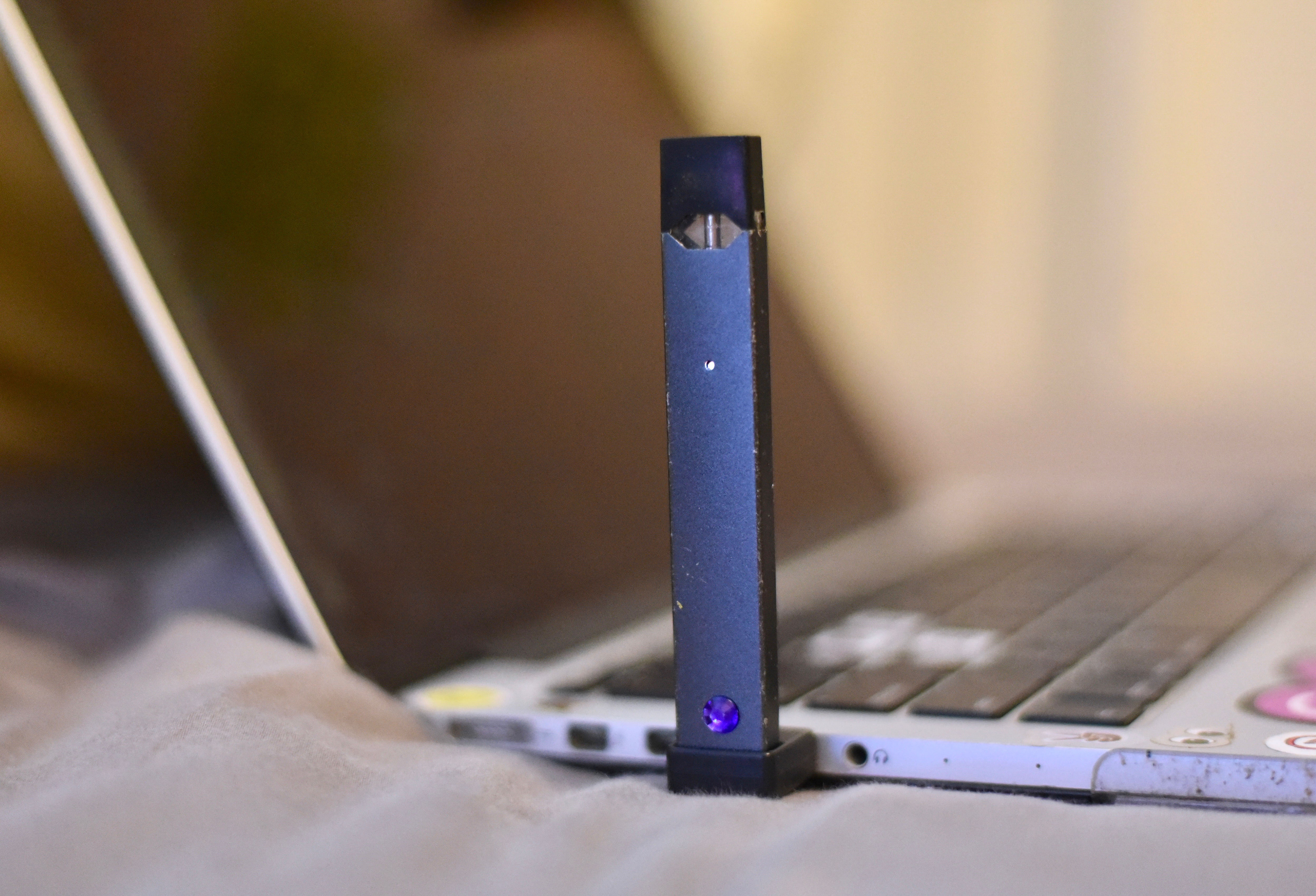 Disguised as what parents and teachers may mistake for a flash drive, there’s a new sensation that is sweeping Wesleyan’s campus. Seen out at parties, during meals at Usdan, and even at the library: It’s the Juul.

The Juul device is thin, black, and virtually weightless. It has been dubbed “the iPhone of e-cigarettes” by various students as well as publications such as Men’s Fitness. The Juul is supposed to be an easy-to-use nicotine vaporizer that is a better alternative to smoking cigarettes. The tobacco and smoke from cigarettes can be full of carcinogens. However, according to the company website, one Juul “pod” allows the user about 200 puffs, and it is considered to have the same nicotine content as one pack of cigarettes.

“It’s dangerous because it’s so accessible,” said Sasha Cohen ’20. “You can do it anywhere, anytime, so it’s a real test of your self control. I realized I didn’t quite have that self control, so I had to get rid of it. I shared it with a friend, and I think the moment I realized we needed to get rid of it was when we thought we lost it at a party. I woke up the next day and texted her to make sure she had it, but she told me she thought I had it. We met up later that day to look for it, and we honestly both panicked that it was gone. There was a moment when I realized that that panic was just a nicotine addiction, and that scared me.”

Since the Juul was created in 2015 and has only been on the market for two years, there has been little research and information regarding its long-term health effects. But after a study performed last month by NYU suggesting vaping may cause an increase in risk for heart disease and cancer, the effects that the Juul can have on the body have come into question in the media. Over the past two weeks, there have been multiple articles published by Refinery29, CBS Miami, Buzzfeed and Metro US explaining more about what exactly the Juul is and whether or not it can cause health problems.

Adding fuel to the fire was a recent rumor that swirled around college campuses last week through text message, reporting that students discovered that they had lung cancer solely from Juuling. Though Juul proved the rumor was proven to be false, the text message reached campuses across the nation, reportedly reaching students from New York University all the way to University of Southern California, and even Wesleyan. (I received a variation of one.)

So how exactly does the Juul affect students here at Wesleyan as well as other college students across the nation? Is it possible that our student body could be unintentionally harming themselves?

David Vizgan ’21 explained that he had some extra money lying around, so he decided to purchase a Juul that was for sale in the WesAdmits Facebook group. His friend who lived across the hall from him gave him some pods and let him borrow his charger.

“I just had it around,” said Vizgan. “I wouldn’t smoke it too much, just when I was doing homework or playing video games; it just gave me a little rush to the head, sort of. It didn’t taste too good.”

But then things took a turn for the worst.

“I realized that I started getting addicted,” said Vizgan. “I felt it. I went home for Thanksgiving and didn’t bring my Juul, and my friend came over with his Juul, and I basically wanted to jump on it. I felt it, and that’s when I noticed it started to get bad. I think the reason I felt that way was because I didn’t smoke that much, but when I did, it was in bursts. For example, twice a week I would, but on those days, it would be for hours. I go through an entire pod in a few hours, maybe after a test to unwind, I would feel these effects very strongly.”

Vizgan said that before winter break, he finished his pods so that he wouldn’t be tempted to bring the Juul back home with him. Over winter break, that same friend came over, and he felt the urge to use their Juul. That’s when he decided that he was going to quit Juuling; when he came back from winter break, he resold the Juul for $35 in WesAdmits, the price it sells for on the website.

“When I came back, I was sick, but the day I got here and went to the smoke shop, got like three packs of pods, I started feeling pain in my throat, pain in my tongue,” Vizgan said. “It was probably because I was sick, but I got really stressed and paranoid about it. There’s history of those kinds of illnesses in my family, and I got really paranoid, and that’s really what did it. Is it worth it for me to do considerable damage to my organs and to feel like I’m dependent on something just to say that I’m in on the culture?”

But the Juuling trend only seems to be increasing here on college campuses. In 2016, the CDC reported that 16 percent of college-aged individuals used vapes. Dartmouth College’s student newspaper, The Dartmouth, reported an increase in Juuling on its campus in a survey taken by the class of 2021. NYU’s student newspaper, The Washington Square News, mentioned the habits of students smoking and vaping indoors, despite the university’s indoor smoking ban.

“It is unknown whether the other substances in the e-cigarette are safe,” said Wesleyan Medical Director Tom McLarney in an email to The Argus. “Most use an agent to make the nicotine easier to vaporize called propylene glycol. Some scientists report they have found trace amounts of other substances such as formaldehyde (much less than in cigarettes) and silica (known to cause lung disease). Nicotine is the very addictive substance that makes it very hard to give up tobacco products. It has been proven that the American Tobacco Industry has added additional nicotine to their products to strengthen the addiction. Some studies have shown nicotine is more addictive than heroin. But it is not the nicotine that causes all the above health problems. It is other substances in tobacco which over time when combusted (smoked) or place in the mouth (snuff) will cause cellular changes, damage and eventual disease.”

As we are just now learning about the potential health effects of Juuling, it’s going to be important for our school community, as well as the doctors at Davison Health Center, to pay attention to the information that comes out in the future about the effects of e-cigarettes. We must have a better understanding of the short- and long-term effects of Juuling and pay careful attention to such a recent phenomenon. Given the popularity and the addictive quality of the Juul, it may very well be putting Wesleyan students at risk.