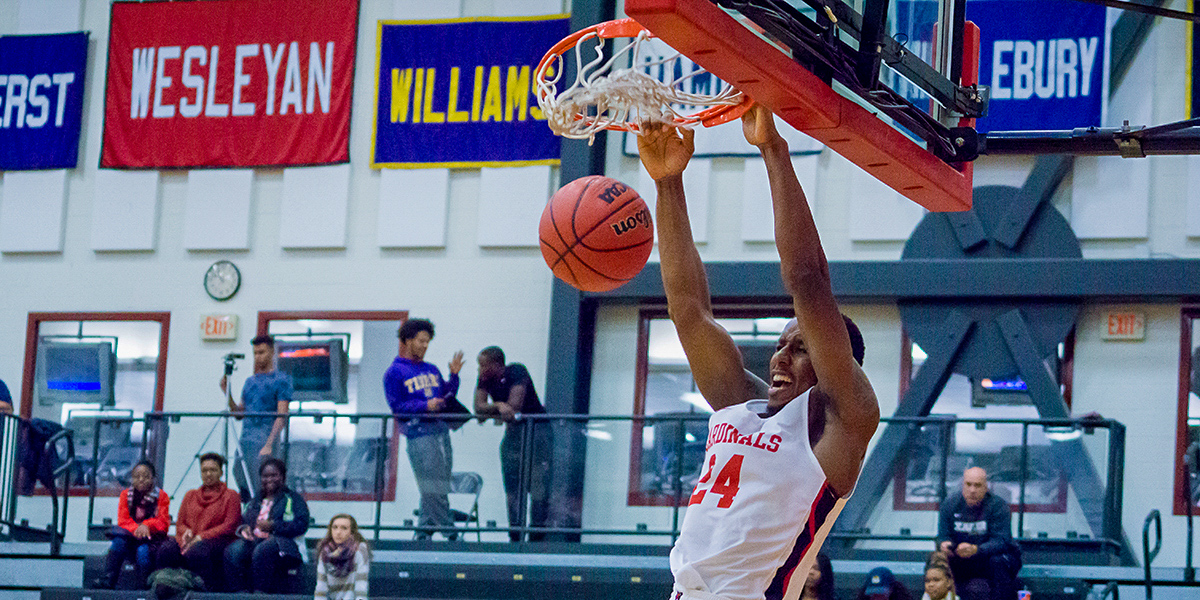 The Wesleyan men’s basketball team ended their regular season this past weekend with wins up in Maine against Colby and Bowdoin. This wrapped up their very successful season, where they finished the regular season with a 19-5 record overall and a 7-3 record in the NESCAC.

The NESCAC is always one of the most competitive conferences in the country and that was never more evident than this year. Amherst, Williams, Hamilton, Middlebury, and Wesleyan all finished with a 7-3 conference record. Amherst grabbed the number one seed for the conference tournament by compiling a 3-1 record against all the teams in the tiebreaker. Williams, Hamilton, and Wes all were 2-2 against the teams in the tiebreaker, and Middlebury was 1-3 against the teams in the tiebreaker. This gave Middlebury the fifth seed in the tournament. Among the three teams with 2-2 records, the Cards were 0-2 against Williams and Hamilton in NESCAC play, giving them the fourth seed and a home playoff game. While all these tiebreakers are confusing and jumbled, they show just how competitive the NESCAC can be.

Almost unluckily, the fourth-seed Cardinals, who finished the season ranked 22nd nationally, get to host a playoff game; the catch is they have to host the Middlebury Panthers, who finished the season ranked fifth in the nation. Despite the gap in national rankings, the teams have identical 19-5 overall records and 7-3 records in the conference, and the Cards came out on top in their matchup earlier this season, 80-70.

The team is ready for the game, and leading scorer Jordan Bonner ’19 is excited for the buildup to the game and ready to see the team dominate.

“[A win] starts with a great week of practice,” Bonner said. “We need to be completely dialed into this game and understand that what we did in the regular season is over and our record is 0-0 in the post-season. Every day this week in practice is an opportunity for us to get better and to get ready to dominate on Saturday. I think our focus and attention to detail must be elite, but at the same time understand this is just like any other game we have played this season. Just because it’s Middlebury and the first round of the NESCAC tournament does not suddenly change the approach we have had going into our other games as well.”

Bonner has been one of the standout players for the Cardinals this season. He leads the team in scoring and finds himself eighth in the NESCAC in scoring with 15.6 points per game. In addition, he leads the Red and Black in minutes per game, with almost 29. He’s hoping for Wesleyan’s support this weekend in Silloway at 3 p.m., Saturday, Feb. 17 for the quarterfinal match in the NESCAC tournament.

“[I’m most excited for] the environment,” Bonner said. “I know that we are going to have a huge turnout for the game so I am excited for our team to show out on such a big stage.”

The matchup against Middlebury has all of the ingredients of an unforgettable game. The Panthers score 81.3 points per game, which is good for second in the NESCAC. The Cards hope to counter that prolific scoring with their stingy defense, which has been holding opponents to a league-low 36.4 percent shooting from the field while just giving up only 63.4 points per game.

Middlebury has had success against Wesleyan, going 3-0 against them in the NESCAC Tournament, last defeating them in the 2016 quarterfinals. In addition, a win would give the Panthers their third straight trip to the semifinals, in hopes of a third straight conference championship. If the Cardinals win, they’d gain their first trip to the semifinals since 2015, the same year they claimed their only NESCAC tournament crown.

Though the Panthers are a formidable opponent, Bonner is excited for the matchup and confident that the team can go to heights never seen before.

“We can beat any team in the country,” he said. “ I feel like this past season we have learned a lot of lessons through our adversity and success that has prepared us to make a deep run in the playoffs and beyond.”

The Cardinals look to begin that run Saturday afternoon.