A History of Wescam: “Wescam is Coming Soon, Are You?” 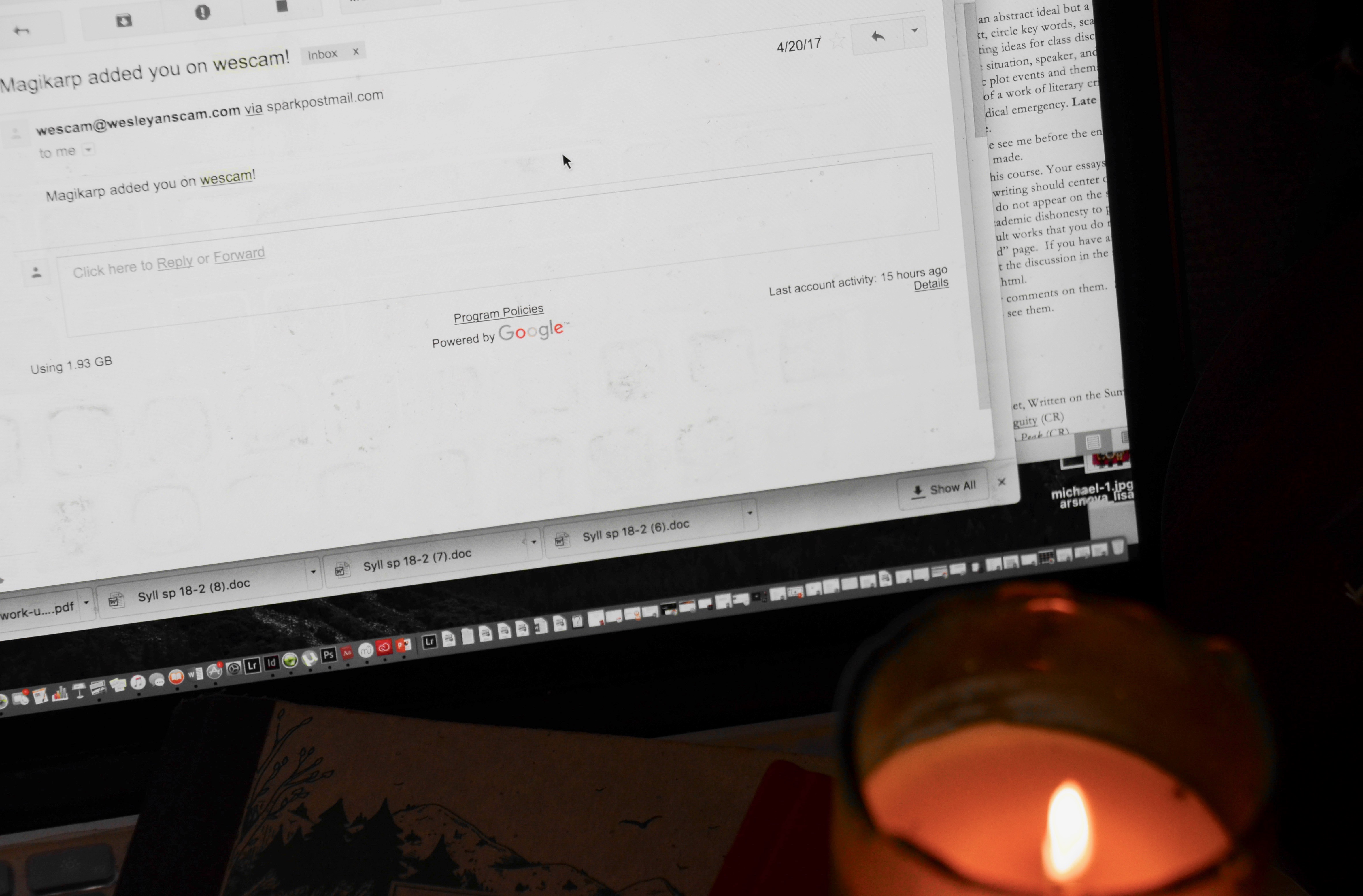 For many Wesleyan students, distracting oneself from a tedious final project usually involves copious amounts of Netflix binge-watching or unnecessary stops to “refuel” at Weshop. But when Jesse Vincent ’98 was a Wesleyan student, he procrastinated by creating a Wesleyan-specific match-making website that would receive a New York Times write-up and eventually become one of Wesleyan’s most prominent traditions 20 years later: Wescam. Wescam was created with the intention of helping seniors in the twilight of their college years reach out to fellow students that they may have noticed from afar, but had never had the courage to “contact.” A Tinder-esque matchmaking service, Wescam currently lets Wesleyan underclassman register to the site, add seniors they are interested in (or in the case of current seniors, any Wesleyan underclassmen in addition to seniors) and send an anonymous message to said student. The identity of the messenger is often revealed through a series of email exchanges, and after names are uncovered, the rest is up to the participants involved.

A Russian and Eastern European Studies major, Vincent was heavily involved in the Student Net, Wesleyan’s student computing club at the time, worked at the ITS help desk his freshman year, managed the help desk his sophomore year, and was president of Alpha Delt his senior year.

Instructed to create a work of pornography that aligned with his personal definition of the word as the final project for Professor Hope Weissman’s “Pornography” class in the College of Letters, Vincent observed as classmates labored over artwork, films or stories, ultimately choosing to go in a fairly unique direction. With the thought of Senior Week looming close, last chances were a relevant theme drifting in the air and a large source of influence for his final project proposal.

“I started messing around with the idea of ‘automating’ Senior Week,” Vincent revealed in an interview with The Argus. “It’s been long enough that I can’t really remember if it was intended as social commentary, a joke or something a little more serious. At the time I was in a stable monogamous relationship—I wasn’t really building it ‘for me.’ In the end, I decided that pornography was, ‘a work that allows its audience to live out its sexually transgressive fantasies without fear of transgression.’ A few months ago, I actually found the course evaluation I got back from Professor Weissman. It’s a good thing I took the class CR/NC. She wrote that the real transgression was that I got away with writing this software in place of my final project. The whole evaluation was a pretty epic troll. She told me that if it were going have really been transgressive, the tagline ‘Wescam does not imply consent. It is a substitute for time, tact and courage’ would have to go. She also suggested that we ought to have included faculty.”

While Professor Weissman may not have reacted to Vincent’s final project with complete approval, Vincent admits that the general response to Wescam was overwhelmingly positive. Wescam’s success came with its fair share of fame, leading Vincent to have interactions with people he hadn’t spoken to in years. A wink and a nod was Vincent’s exchange for the software he had created.

Created a year before some Harvard students launched “TheSpark,” later to be known as OkCupid, years before apps like Tinder or Bumble were created, and just three years after the creation of Match.com, Wescam was a project ahead of its time. Originally, Wescam went “live” right before finals and every Wesleyan undergrad was searchable in the system. As Vincent explains, the fact that every undergraduate student at Wesleyan was in the system gave everyone deniability.

“Just because a student’s name was listed on Wescam didn’t mean that they had opted in,” Vincent explains. “If you logged into Wescam and picked your crush, but they didn’t match with you, there was no way to know whether they weren’t into you or just weren’t playing. It meant there was still hope.”

The ability for seniors to indicate interest in Wesleyan students from any grade and everyone else to only add seniors is a feature that has been maintained since Wescam’s construction. However, when Vincent created Wescam, emails were only sent out to Wesleyan students who had each indicated interest in one another, students who had “matched.” The matching aspect of Wescam is no longer a real part of the process, a Wesleyan student does not have to show reciprocated interest to receive a message. And from its onset, Wescam was a process that was not immune to those trying to play the system.

The first year Wescam went live, Vincent reveals that news of the website information was circulated via a few hundred posters that Vincent, along with a few friends, plastered around campus. Vincent recalls that the posters sported risqué phrases like “Wescam is coming soon. Are you?” designed to boldly call attention to the project. The FAQ section of the initial site can still be found.

Initially, Wescam appeared to be run anonymously; Vincent’s identity as the face of Wescam remained hidden. However, a writer for The Argus wrote an article about the project and larger pieces were written in Playboy and the New York Times. And while Vincent and his friends’ positions as members of Alpha Delt were played up, construing those responsible for Wescam’s creation as frat bros, Vincent clarifies that the fact that they were in Alpha Delt was really unrelated. Yet, hidden deep within a closet in Alpha Delt was where the server for Wescam resided during Vincent’s senior year.

“The first year, the site got themed with a very 1970s sort of kitschy pastel flowers and hearts look,” Vincent explains. “The second year, it looked like a clone of Amazon. (Going so far, I think to brand itself ‘Scamazon’ in some places.) That may sound really weird today. And it was pretty weird then, but Amazon was still…new then.”

Vincent explains that his job was far from over even when Wescam went live. Numerous times, Wesleyan students, who had been in relationships while Wescam was active, but suddenly found themselves available, knocked on Vincent’s door pleading him to let them Wescam people even after selections had closed. And while Vincent enjoyed all that came with managing Wescam—he ran it until 2004—there came a point when his involvement with the project had, in his mind, run its course.

“Wescam’s vision stayed pretty consistent throughout my tenure running the show, up through 2004 when I shut it down,” Vincent said. “At that point, I was 5 years out of school, the folks who were frosh when I had been a senior had graduated and it just felt really unacceptably sketchy to be running a service to help undergrads get laid.”

Vincent signed off in 2004 with the following message found on the first Wescam website: “We’ve had a good run and we’re happy to have made so many people *wink* *wink* *nudge* *nudge* happy, but right now, I think it’s best that we see other people. All the time.”

While the concept and goal behind Wescam have largely remained consistent throughout the years, as technical abilities and matchmaking sites have grown, so too has Wescam.

After a frightening gap in time when Wesleyan campus was Wescam-less, the project fell into the dutiful hands of Vernon Thommeret ’10 and Carlo Francisco ’11.

“I heard that it started out as a website in 1998, created by Jesse Vincent,” Francisco wrote in an email exchange with The Argus. “I’m not sure how many years it ran after that, but by 2010 it hadn’t been around for a while. That year, a senior—my friend Vernon Thommeret ’10, whom I consider one of my biggest professional mentors —built a new version of it a few days before his senior week. I didn’t really do that much of the coding; instead, I observed and let Vernon run ideas by me. As far as I remember, it was a huge success that year and people agreed that it should come back as a yearly thing.”

After observing Thommeret run Wescam in app form, Francisco took on the responsibility the following year, rewriting the software using a new web application framework he was learning at the time. Speaking about his experience running the app during senior week, Francisco admitted that while his involvement was generally uneventful, some Wesleyan students did contact him requesting to “unmatch” people who they had matched with while intoxicated. Francisco revealed that he usually honored such requests. Furthermore, Francisco reflected that watching others use the app during senior week was exciting.

“I enjoyed seeing people using it on the bus to senior cocktails, or to listen to folks talk about it at parties,” Francisco admitted. “One thing that Wescam always had over dating apps that took over the mass market later on like Tinder was how it told you that someone had added you but didn’t reveal their name — since you knew it wasn’t a stranger, it was fun thinking about who it could be. It’s definitely a user experience that I haven’t seen a contemporary app reproduce. Startups aim for growth and wide reach, while Wescam’s design closed it off to a small audience by default.”

While Francisco was not totally sure about the whole future of Wescam, the app did not fall by the wayside after his retirement from the project. In 2013, a friend of Francisco’s, Diego Calderon ’13, took over the app and consulted Francisco for technical information. Then, in 2014, Justin Raymond ’14 gained control of the app, formally passing it onto Sam Giagtzoglou ’17 the next year.

“I inherited Wescam from Justin Raymond in 2015 and ran it in 2015 and 2016—my junior and senior years,” Giagtzoglou explained. “Then I passed it down to Brandon Baker ’18 last year and helped him a little—he runs it now. For 2016, I basically redid the entire site from the ground up so I could make an iOS app as well.”

Baker, a computer science major and friend of Giagtzoglou’s, started working on Wescam with Giagtzoglou his sophomore year. Giagtzoglou became the first to write the Wescam iOS app. Then, last year, Baker took full control of the app, adding a “supercrush” option to both the website and app. Baker explains that he is continuing his involvement with Wescam this year, but preparing the habitual passing on of the project.

“This year, I’m running it again, and I’m working with Emma Freeman ’19 in preparation for her taking over after I leave,” said Giagtzoglou. “Most of the changes for this year will be under the hood changes for performance/ user experience, unless Emma has some bigger changes she’d like to try implementing.”

Wescam certainly has a vibrant history, one that will likely not be forgotten by both participants and overseers involved. Vincent left a startling and lasting thought in our minds as the Wescam season inches closer.

“There may now be students using Wescam whose parents got together on Wescam,” Vincent said.