Finding Home Away From Home: Watching the Super Bowl Abroad 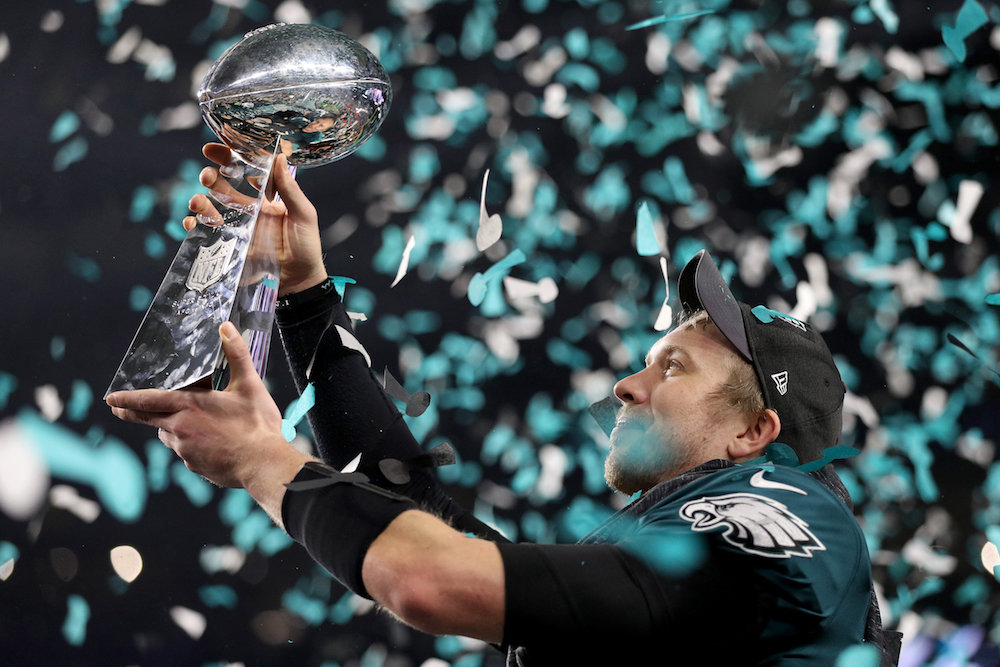 The Eagles won and I couldn’t decide to stand or sit, yell or gasp, or hug the Germans. It was only me who cared. I was the only one from Philadelphia, and one of the only few from the U.S., for that matter. The rest of the faces in the old, built-over courtyard of an exchange student house in Bogotá’s colonial neighborhood simply smiled and laughed at me. I watched gleefully as confetti covered Tom Brady’s sunken head and people took turns hugging Nick Foles.

The final score wasn’t even that close: 41–33. The Eagles’ unstoppable offense and pass-rush had finally avenged their tragic 24–21 loss to the Patriots in the 2005 Super Bowl, back before Tom Brady had been caught deflating the game balls. This was the Bird’s first time winning a championship since 1960, which was before there was even a real “Super Bowl.”

What made this game all the more special for me was how difficult it was to find on a T.V. in Colombia, where I’m studying for the year at La Universidad de los Andes. In part, this is due to how early the day begins and ends here (e.g. classes begin at 6:30 am), especially on Sundays, when everybody is eating dinner with their families. When I took an eclectic mix of two Germans and a Cowboys fan to an Irish pub the other week to watch the Eagles play the Vikings, we were kicked out at 8 p.m. when they closed. I had to track the second half of game through live updates on my phone.

Another issue with finding the Super Bowl is how completely unpopular American football is in Bogotá, despite how international the city is. People much prefer the NBA or European soccer, or literally anything else. Most of the bars I walked past on Sunday were playing Premier League rather than the Super Bowl.

This scarcity of available football greatly concerned my sporty uncle and family back in Philly. Letting myself miss the game would have been a negation of my roots to them. Fortunately, though, I found the few other Americans at the UniAndes (there’s 12) as well as several Europeans who were interested in watching the game. After we failed to find a bar that would stay open past 8:30 p.m., one of the girls invited us all to her house, La Casa del Sol, where she lives with other university students.

We brought beer and had all sorts of chips and classic game day appetizers (including a salsa-ish substance from a squeeze bag), but it wasn’t quite like any Super Bowl viewing in the U.S. For one, the treasured ads were completely different; Doritos and Bud Light had been replaced by a barrage of announcements for the Arsenal vs. Manchester City game and ESPN repeatedly flashing clips of their polo broadcasts (the kind with the horses) and shots of Novak Djokovic’s face.

One aspect of the viewing party I did enjoy, however, was that I made all the English speakers cheer for the Eagles. This took its most extreme form when I made a German student named Niklas sing the team’s fight song with me every time they scored a touchdown. The group of French students cheering for the Patriots did not appreciate this one bit.

When all was said and done and the team’s owner Jeffrey Lurie was giving a speech to Eagles fans all over the world, I couldn’t help but think he was talking directly to me—the exchange student in Bogotá, Colombia. I felt a strange regional pride, despite the fact that, to be honest, I’ve never really followed the NFL closely, save watching the occasional Sunday game with my family. The team’s victory brought all those warm memories back.

Walking around the city that night only amplified a weird but joyful feeling. A Welsh kid named George and I were looking for something to eat in the closed-down city since the French hadn’t shared any of their pizza. Few people were out, except for a scattered collection of beggars and a couple confused-looking Patriots fans roaming the ancient streets. The two of us ended up eating empanadas in a 24-hour snack shop where I tried to tell him why football was so much better than rugby. Walking back to my apartment, I watched my friend’s Snapchat videos of riots in Philadelphia and at Penn State.

I hadn’t anticipated how moving farther away from home would bring parts of it closer to me, making me feel for the first time that I’m from somewhere. It’s as if looking at Philly from a distance makes it a place I can identify with and take pride in.