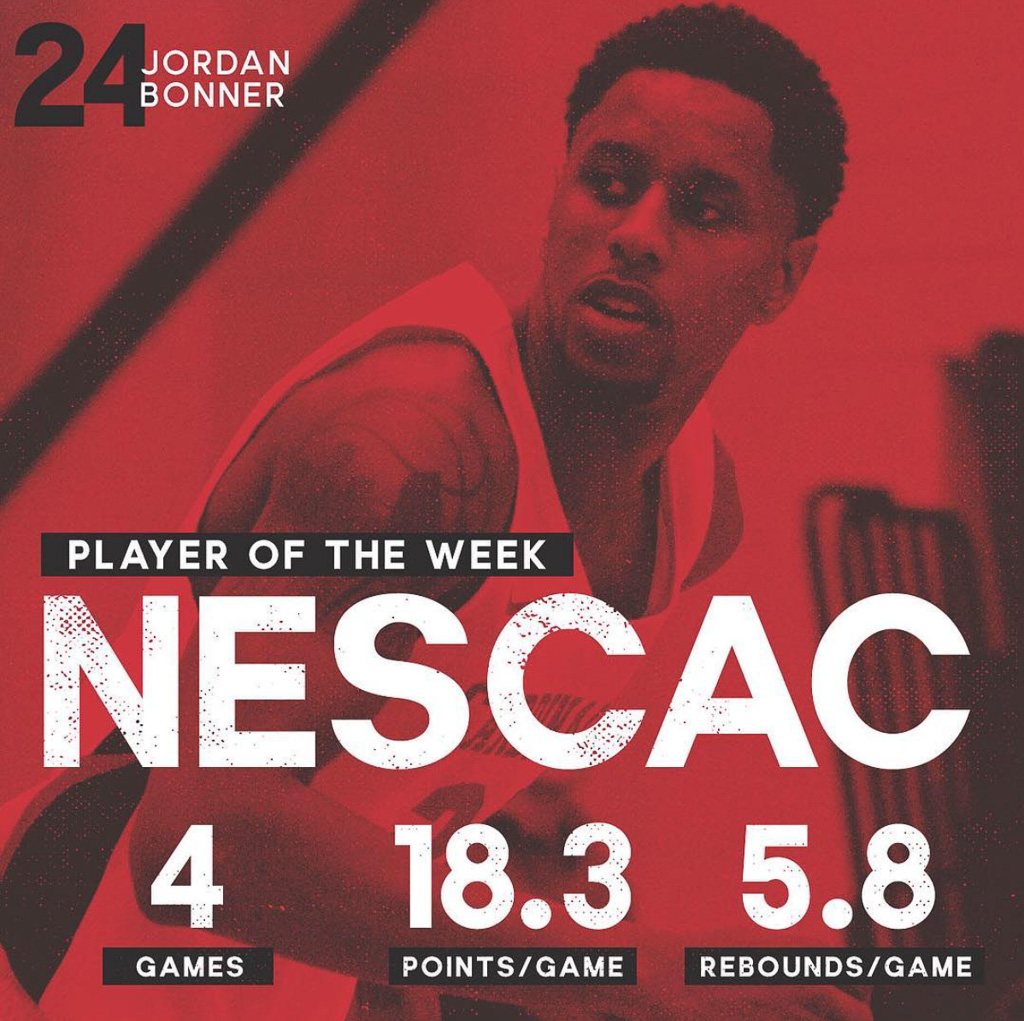 The Wesleyan men’s basketball team has been flying high, transforming the Cardinals into birds of prey with strong play this season. With a 16-4 record overall and a 5-2 record in NESCAC play, the team sits in second place and is playing extremely well, winning their last four conference games. The team has been led by several standout players, with Jordan Bonner ’19 leading the pack. Bonner is the team’s top scorer and is ranked sixth in the NESCAC with 16.2 points per game. The junior from Houston, Texas has been dazzling with his dunks and his three-pointers. He was just recognized as NESCAC Player of the Week. As the team gets ready for the end of the season and the clash with Amherst to decide the Little Three, The Argus caught up with Bonner as he drank some hot chocolate on a cold January evening.

The Argus: What made you come to Wes?

Jordan Bonner: Primarily, the team. When I came for my visit, they were welcoming, and they felt like a family. I wanted to come here, the coach was awesome, and you know it’s a great school too. My family’s always been big on education, so I knew I could get the best of both worlds here: go to a good school and play for a good program.

A: How has the team, school, and coach made you feel at home so far from home?

JB: We do a lot as a team. Although people are involved in things outside of just basketball, we try to do as much as we can together, on and off the court. On the weekends we go to the basketball house and we just chill. People are always having meals together or just checking in with you. Those small things go a long way. Because sometimes, you can feel alone here, but having people constantly checking in on you and making sure you’re good makes a big difference.

A: What’s your favorite part of the team?

JB: I think how goofy everyone is. People don’t take themselves too seriously. That starts with the captains. We all want to win, but basketball at the end of the day is supposed to be fun. I think everyone being kind of loose and making jokes and having fun is my favorite part. We all want to win and we give each other constructive criticism when needed but we have a lot of fun together.

A: How have you felt about the season so far?

JB: I’ve felt really good so far. We have a long way to go. We’re playing well but I think there’s always room for improvement and we’re not where we could be. I think we can get better. I think it’s just not taking the bait. Although we’ve seen success, [it] doesn’t mean we can stop working and get complacent. We can get so much better. I’m just hungry. I want more.

A: What are the ultimate goals for the season?

A: What are you doing to step up as a leader?

JB: I think just trying to lead by example. I think it’s one of the toughest things to do consistently but I just try to keep that in mind because I have the first years and sophomores looking up to me. If I say something but I don’t follow through with it, then I’ll lose some of that respect. I take that into practice and the gym, I try to work harder than anybody else because you can’t take any of this for granted. I feel like when you start to see some success people start to get complacent but that’s when you have to boost your game to the next level. I just try to be personable, too. I take a lot of the younger guys under my wing. You know Austin [Hutcherson ’21], that’s my little brother. I try to have lunch and dinner with them, and just try to mentor them. Because that’s what it’s all about, just paying it forward. When I was a freshman I had guys like Jack Mackey ’16 and Harry Rafferty ’17 looking out for me. I feel like that’s the least I can do for these guys.

A: What does it mean to play for the Little Three?

JB: It means a lot and it would be great to win for the third year in a row, but man I want that NESCAC championship and to make it past the first round. I think we can go far and we just have to keep that focus into the postseason.

A: What does it mean to be NESCAC Player of the Week?

A: Do you lobby coach or the players to run that alley-oop play that seems to work every time more often?

JB: Philly-C is what it’s called; I don’t! It’s coach or the point guard! They see how the defenders are playing me and they call the play. Nathan [Krill ’18] throws the pass and it works all the time. He’s a great passer and it’s a dunk. They look out for me and set me up for that dunk and to make the plays.

A: What’s the craziest dunk you’ve done during a game?

JB: Not in [a] game, but I’ve dunked on people before which is fun. In warmups, I’ve gone between the legs and done a windmill. In a game, I try to be safe, maybe if were up by a lot I’ll try something crazy but usually I want to dunk it and make it safe.

A: What do you think of the first years on the team?

JB: The first years have been fearless since day one. They’ve really stepped up. We needed players to step up offensively and defensively. You know Justin James [’21], you throw the ball up to him and it’s a dunk every time. Man, he can jump. You got Austin, he takes the load off. He’s a playmaker, he can shoot, I think he has the second highest three-point percentage in the NESCAC. You got Antone [Walker ’21] who can take anyone off the dribble. Man, they’re just good. They’re going to be a force to reckon with when they get older. I trust them, I trust them to get the ball and make plays. They’ve stepped into that role. None of them have been scared. That’s one of the biggest things, you come into college from high school basketball and that’s a big change. But they’ve really found success; I think the results speak for themselves.