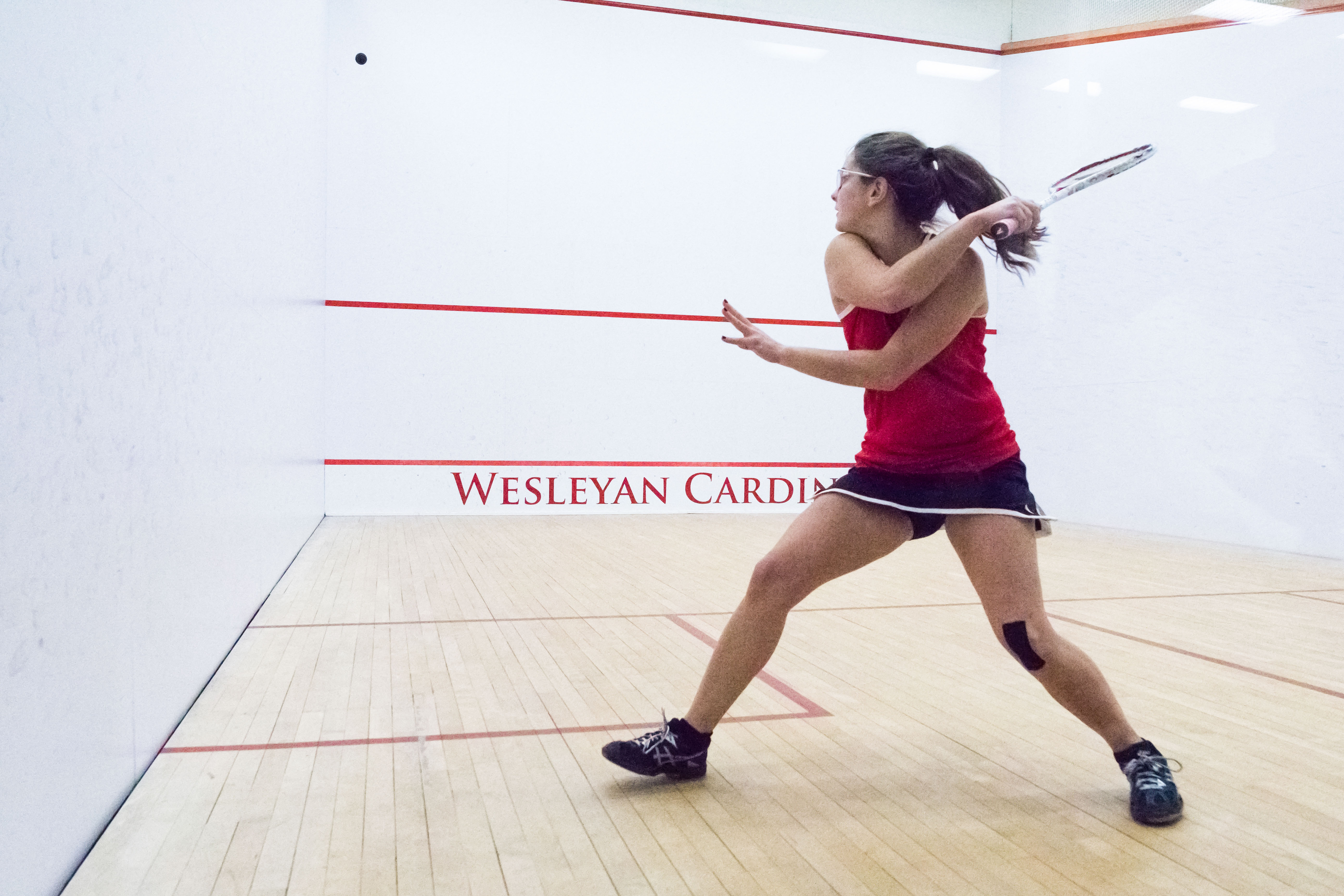 Wesleyan’s squash teams have had a mixed season after the successes of last year, which included a victory in the consolation bracket of the Walker Cup for the women’s team, and the championship of the Conroy Cup for the men’s team. But times often change. While the women’s team has maintained a similar level of success this season with an 8-9 win-loss record, the men’s team has fallen to a 4-13 record after losing five seniors, all of whom played in the top five positions on the men’s ladder. The teams are ranked 21st and 31st in the College Squash Association (CSA), respectively.

After starting out the season with a 7-2 loss versus Trinity, the women’s squash team captured commanding victories back-to-back versus William Smith College, conquering them 9-0, and Colby, securing the win 6-3, before falling in a tight match 4-5 to Tufts. As the season has worn on, the Cards have proven themselves worthy opponents but nevertheless unable to break into the top ranks of college squash. After winter break, the Cards lost 1-8 to fifth-ranked Stanford University. After handily defeating 27th-ranked Mount Holyoke College 9-0 and 19th-ranked Hamilton 7-2, the team fell 2-7 to 24th-ranked Bates.

Using the CSA’s player rating system (an Elo-based ranking system which, like chess ratings, attempts to predict the outcome of a match between two players based on their ratings), it has been clear over the season that the women’s team has potential but needs more experience. One easily winnable match was the deciding factor in the loss versus Tufts. In a 3-6 loss versus 18th-ranked Dickinson College, two of the nine matches played were decided in close fifth sets and could have easily swung the Dirty Birds’ way. And in the 4-5 loss to 19th-ranked St. Lawrence (who shares the same ranking as Hamilton), the rating system suggested that the Cards could have picked up three of St. Lawrence’s victories.

In spite of the rating system, the reality is that when players step on the court, they only care about each other’s shots, not the numbers associated with them. The intangibles can never be represented by a number, no matter how often ESPN insists on the opposite.

“When it is match time, we are equal and no rating or level matters, what matters is the amount of effort and focus that is put in before and during a match,” said Laila Samy ’18, last year’s NESCAC player of the year.

All of this is not to sully the success of the women’s squash team. Their victory over Colby included an excellent four-set victory by Josie Russ ’20 at the fourth position, and their triumph over Hamilton was due to gritty performances again by Russ at four, Nina Premutico ’20 at six, and Tatum Leclair ’18 at seven. With agreeable victories over Bowdoin, 8-1, and Conn College, 9-0, the Cards certainly have had their moments this season. And who can forget Samy, who has not lost a match the entire season playing number one for Wesleyan.

In addition, several squash-playing Cardinals—Ale Lampietti ’19, Ali Imperiale ’19, and Josh Lane ’19—studied abroad during the fall semester, which has limited their time on the court.

“After being abroad, getting into squash has honestly been pretty tough physically, so I’m making sure I prevent any and all injuries possible,” Lampietti said. “However, the team has welcomed me, Ali [Imperiale], and Josh [Lane] with open arms, and it’s been like coming back to our squash family.”

After a string of losses to 15th-ranked Amherst, 11th-ranked Williams, and then the 16th-ranked University of Virginia, the women’s team will play in the NESCAC championships this weekend versus Hamilton, before heading to the CSA National Championship at Harvard University the weekend of February 16 and the CSA Individual Championship at George Washington University the weekend of March 2. Clearly, the women’s team has had their run of successes this season, and hopefully their close losses will give them hope, not dejection, as the post-season begins.

“When it comes to tougher matches, it’s not about winning or losing, it’s about ways of improving,” Lampietti said. “It’s an honor to compete against teams that are top in the country because we learn so much from the way they compete and play on the court. It can definitely be demoralizing at first, but then you realize you’re playing the sport you love, and you can only go up from [there].”

“Hopefully we will have our best performance at Nationals and move up a few spots,” Samy said. “We are a much stronger team this year and I am certain that our team will keep getting stronger in the next years.”

After two strong victories over 44th-ranked Vassar College and 41st-ranked Bryant University, the men’s squash team has failed to meet the success of last year. In December, the Red birds lost exacting matches to Colby, 1-8, Tufts, 2-7, and Conn. College, 3-6. Against each school, the Cards came up short in valuable matches that came down to deciding fifth sets, particularly against Conn College, where Jackson Rubinoff ’20 at the fifth position regrettably lost the final set 12-10. Yet in that same dual, William Bienstock ’20 at three was able to come back and claim victory in the fifth set after a devastating loss 19-21 in the fourth set, which, if he had won it, would have given him the match.

In the face of unfortunate and prevailing defeat, the men’s team has shown admirable mental toughness and strength. And there have been small successes. The Cards bravely defeated 32nd-ranked Stanford 7-2 after training for five days in the Bay Area during the winter break. But 22nd-ranked MIT, 26th-ranked Hamilton, 20th-ranked Bates, 29th-ranked Haverford College, 17th-ranked Dickinson College, and 28th-ranked Bowdoin were simply too strong for the Cards to fly past, and they respectively lost 3-6, 4-5, 1-8, 3-6, 0-9, and 1-8. Like the women’s team, there were several matches in the duals that the Red Birds could have won, especially versus Haverford, where just two match victories would have swung the match in the opposite direction. Numbers never tell the entire story, but they do hint that the Cardinals have had the potential to play better than the results suggest.

Following the match versus the Polar Bears, the Dirty Birds cleaned up their act when they once again defeated Stanford 5-4, this time at Amherst, with top victories coming from Sean Choi ’21 at the first position and William Coburn ’21 at eighth. But like Icarus, the Cards began to fall fast, once again stifled by Conn College 4-5 and at the Little Three Championships to Amherst 2-7 and Williams 1-8. Their final regular season match came versus Navy last Sunday, where they fell 0-9.

Like Samy on the women’s team, Choi has been a standout for the Cards, compiling a 12-5 record in the first position on the ladder and consistently driving matches the matches that he lost to fifth sets.