Getting Their Head in the Game: Men’s Basketball Continues to Thrive 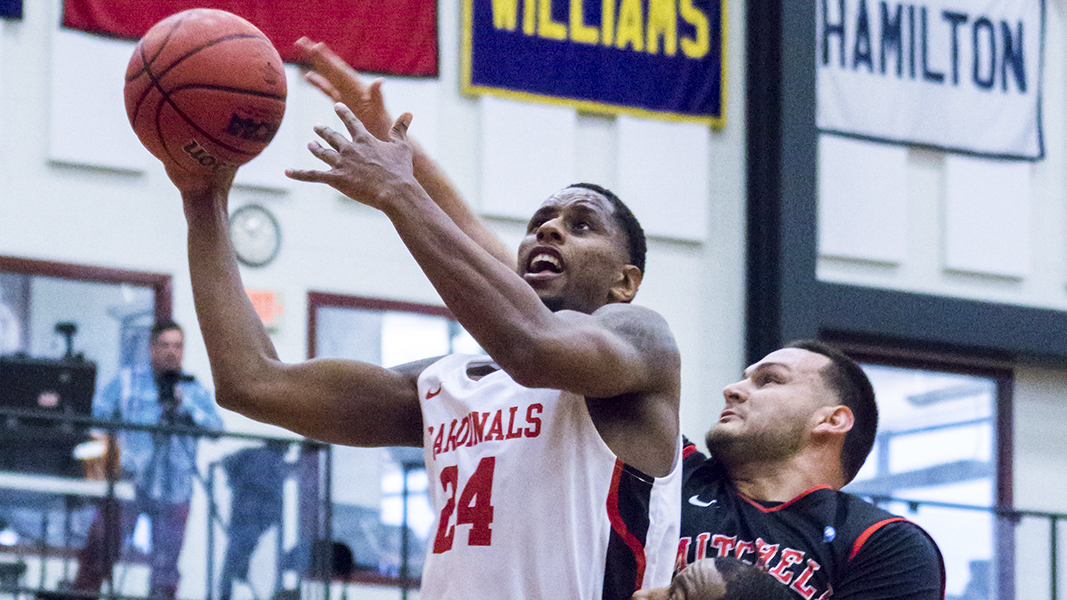 The men’s basketball team has had an abundance of success over the last few years and shows no sign of stopping. After making the Division III NCAA Tournament last season, the Cardinals have remained competitive this year with a 14-4 overall record. Despite their consistency and high playing level, they’ve suffered one poor stretch so far this season. Starting strong with a 9-0 record, the Birds lost three of their next four games, including two of the first three NESCAC games. Still, the team has shown resilience and has rebounded to win four of their last five games.

The Cardinals have mostly dominated non-conference opponents, compiling an 11-2 record. Their losses since the end of the fall semester came against Springfield College in the final of the Naismith Classic preseason tournament. The second loss came against Purchase College as Michael Soffer hit a buzzer beater to lead the Panthers to a win.

The two other losses that the team has suffered this year have come in the incredibly competitive NESCAC portion of the schedule. Currently, four teams from the conference hold places in the NCAA Division III basketball rankings. Middlebury is 10th, Wes follows at 14th, and Williams and Hamilton trail at 15th and 16th, respectively.

After defeating Williams in overtime in a non-conference bout, the Ephs got the better of the Cards the second time, defeating the team 76-68 in overtime. Wesleyan then defeated Middlebury 80-70 before succumbing to Hamilton, 76-70. The team has defeated its two most recent NESCAC opponents, Amherst and Connecticut College, taking the teams conference record to 3-2, with five more games to play. None of those contests are against ranked opponents.

“I think NESCAC play has gone pretty well so far,” McDonald said. “Our two losses have been to very good teams, Williams and Hamilton, and both games came down to the last minute. A few more plays here and there in both games and we’d be undefeated in league play. From here on out, our goal is to win every league game and we feel like we have a good chance of doing that.”

After the tough portion of the schedule, the team has faced some non-conference opponents, defeating Johnson and Wales University and Farmingdale State University, mixed in with the loss to Purchase College. These games are good preparation for a competitive weekend coming up, with the Cards hosting Bates on Friday night before a senior-day matchup with Tufts on Saturday. The games have allowed the depth of the Cards to shine, especially some of the first-years on the team, three of whom are making important contributions to the team. The trio is led by Austin Hutcherson, a 6’6” guard from New Jersey who has started 15 games and is averaging 11.6 points per game. Antone Walker and Jordan James have also made strong contributions, both playing in all 18 games and averaging at least 15 minutes per game. The depth has been a positive for the team.

“Our first years have been great all year, and all three are really good players,” McDonald said.“They have stepped up in big moments which has been huge for us. I think it has helped our team a lot and has caused them to grow up early in their careers. They enjoy learning from Coach [Reilly] and some of the older players on the team which will benefit us down the road in February and March.”

Though the team is getting big contributions from younger players on the team, the veterans are leading the way. Jordan Bonner ’19, is the 7th leading scorer in the NESCAC, at 16.4 points per game. Nathan Krill ’18 is the third leading rebounder with 9.2 rebounds per game. Though missing some time for an injury, Kevin O’Brien ’19 is second in assists per game, first in steals per game, and in the top 10 of blocks per game, chipping in 8.4 points and 6.4 rebounds per game.

The team is excited to keep the good season going and send the seniors out in the right way. Come out on Saturday to see Sears, Krill, and JR Bascom ’18 recognized for their efforts and contributions to the program. In addition to the success the team has had so far this season, the Cards have a chance to win the Little Three title in two weeks when Amherst comes to Silloway. With a victory, the team will immediately claim the crown.