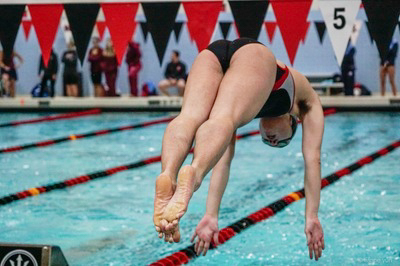 As the campus community preps for finals, Wesleyan’s swimming and diving teams will be hard at work both in the library and in the water. After a weekend of NESCAC rivalry, the Cardinals continued their fight with a meet against Amherst on Monday, Nov. 20 and in the CT Cup on Saturday, Dec. 2. But their pre-holiday journey isn’t over: the teams must prepare for their final 2017 meet on Saturday, Dec. 9.

Perhaps it was Saturday’s long day of swimming that made Monday’s meet so difficult. Both the men’s and women’s teams fell to Amherst, 161-126 and 170-115, respectively. However, neither of these scores reflect the large amount of individual success the Cards found in the pool.

For the men’s team, junior Brandon Pearson upped his total of first-place splashes on the season to three during the 1- and 3-meter diving events. Fellow junior Alex Kapphahn also took a first-place finish in the 100-yard IM, boasting nine points for the team. Not letting any first season nerves get in their way, first-years Eric Lindheim-Marx and Phillip Wong claimed top-three finishes in individual events. The newbie duo took second and third in the 400 IM respectively and both claimed second in other events: Lindheim-Marx in the 500-freestyle and Wong in the 100-backstroke.

Third-place finishes came in swimmingly from senior diver Ethan Chupp in both the 1- and 3-meter dives. The 400 freestyle relay comprised of Quinn Tucker ’20, Wong, Aidan Winn ’18, and Lindheim-Mark took the same place in 3:22.78. Tucker went on to grab third in the 200- and 100-freestyle events as well.

The women’s team claimed similar individual triumphs that they had only two days prior. Sophomore Caroline Murphy once again swam to success, finishing first in the 50-backstroke and 50-freestyle and taking second in the 100-freestyle. Fellow sophomore Hannah O’Halloran also claimed a first-place nod, excelling during the 100-yard backstroke to clear second place by just a quarter second. Second-place results were also across the board: senior captain Emily Kessler dove for the 1-meter event and junior Maela Whitcomb found the wall in the 50-butterfly. Whitcomb also placed third in the 100-butterfly and managed a second-place finish in the 200-medley relay along with Murphy, senior captain Zoe Kerrich, and Grace Middleton ’20.

On the third place podium, Leah Cravitz ’20 recorded a 4:57.60 finish in the 400 IM, while junior Julia Dietz swam the 50 backstroke in 28.50. The 400 freestyle relay team, composed of many familiar faces (O’Halloran, Middleton, Dietz, and first-year Zoe Darmon), also garnered a third-place finish.

After less than a five-day rest, the teams were back in the water for the CT Cup on Saturday, Dec 2. The women’s efforts proved more successful, as they placed third out of the five teams, while the men took last-place.

The female Cardinals claimed a staggering 17 top-five finishes on Saturday, three of which were claimed by Murphy. Murphy earned second in the 50- and 100-backstrokes, as well as fourth in the 200-yard backstroke to claim 31 points for the team. O’Halloran took the slot just ahead of Murphy in the 200-yard backstroke, while Dietz also finished third in 100- and 50-yard backstroke. Murphy and O’Halloran joined Darmon and Middleton for third place in the 200-freestyle relay and fourth in the 400-freestyle. The other relay team, consisting of Dietz, Kerrich, Whitcomb, and Middleton, finished third in the 200-medley.

More individual success came once again from Kessler in the 1- and 3-meter diving events, where she claimed first and a whopping 28 points. Kerrich swam solid fourth-place finishes in both the 100 and 50 breaststrokes, while Whitcomb took third in the 50-butterfly and fourth in the 1,000-freestyle. To round out the top-five finishes, Darmon and Cravitz placed fifth in the 50-freestyle and 200-butterfly respectively.

Although not quite as impressive as the women, the men’s team recorded 15 top-five finishes and 10 top-three finishes on Saturday. In the 100-yard backstroke, Wong took the second slot with Kapphahn following right behind to claim third place. Both swimmers continued to succeed, as Wong finished second in the 200-backstroke and fourth in the 200 IM while Kapphahn claimed another third-place finish, this time in the 50-butterfly. Following Wong’s excellent form, Lindheim-Marx snatched runner-up in the 1,000 freestyle, and experienced senior Max Distler placed third in the 200 butterfly. On the board, Pearson raised expectations when he took first in the 1- and 3-meter diving events.

The men’s relays were not to be overlooked on Saturday, with three fourth-place finishes and one fifth-place, racking up a total of 72 points. The three fourth-places came from the 200 freestyle relay (Kapphahn, Tucker, Winn, and Spencer Tang ’18), the 400-medley relay (Wong, Kapphahn, Tang, and Tucker), and the 200-medley relay (Tang, Kapphahn, Nicolas Moran ’21, and Tucker). The 400 freestyle relay, composed of Distler, Wong, Garrett Kaufmann ’21, and Andrew Schwartz ’20, took fifth place.

After a long weekend of meets, the team will work to continue their efforts for next meet this semester and beyond in tiresome practices that are both physically and psychologically draining.

“Swimming is very emotionally exhausting because the training is very rigorous and time-consuming,” Schwartz said. “We often have to wake up for practice from 7-8:30 am and then return to the pool for an afternoon practice from 4-6:30 pm.”

And with the academic rigor that comes with the end of a semester, the team must balance their efforts to succeed both in the pool and the classroom. Their last meet of the 2017 year comes this Saturday, Dec. 9, in a home meet against Tufts, Williams, and WPI.