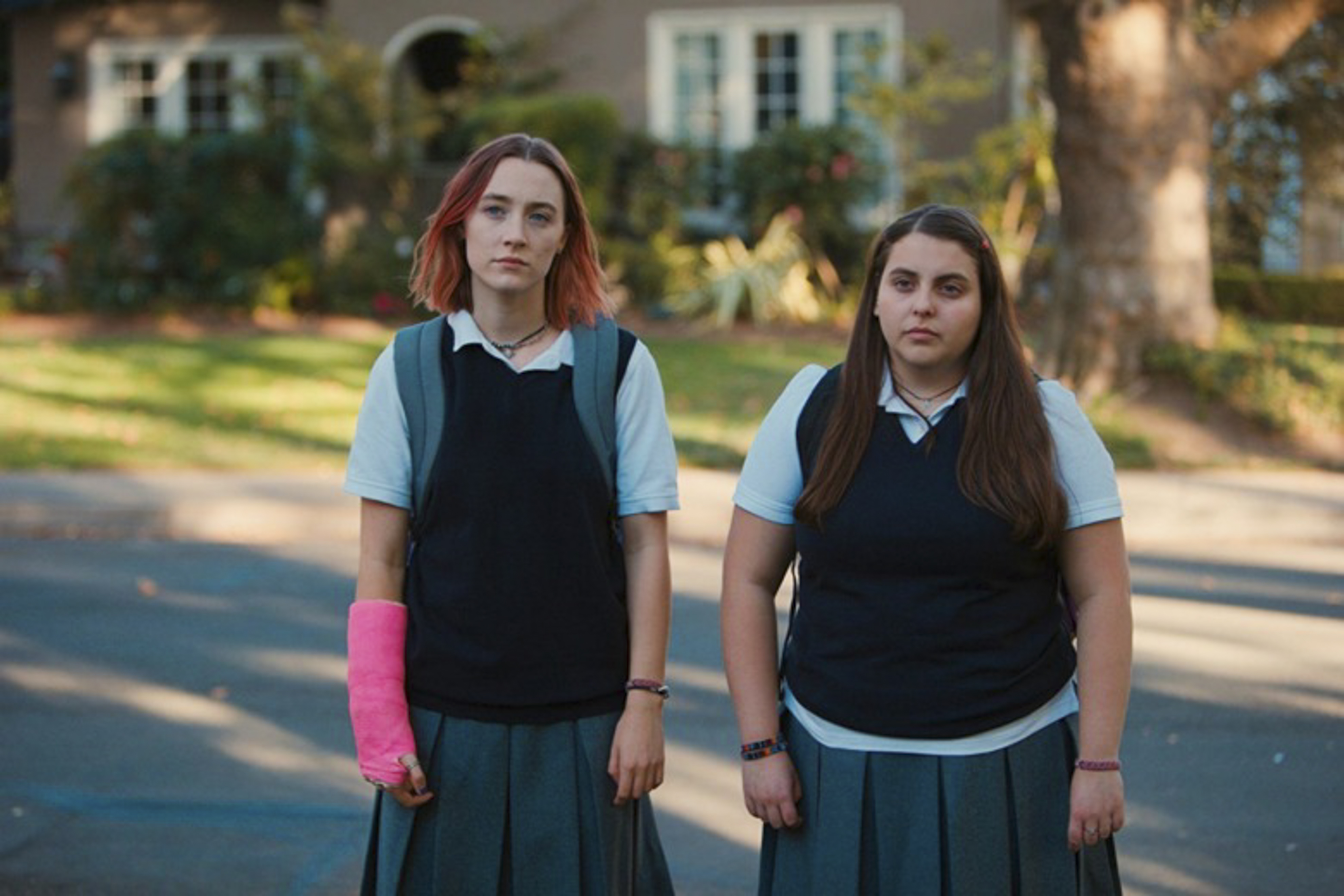 “It was given to me by me,” asserts the titular lead character of “Lady Bird” when asked if Lady Bird is, in fact, her given name.

It’s this type of defiant allure that makes Lady Bird (a stunning Saiorse Ronan) simultaneously a completely cliché female teenage character and a wholly new invention, an utterly relatable and unattainably cool heroine. In many ways, “Lady Bird” is predictable—it’s a coming of age story starring a quirky girl surrounded by an endearingly offbeat cast of characters. But each trope has been infused with a freshness that makes the film an altogether new experience, a multifaceted exploration of something deeper than just growing up.

“Lady Bird” is set in early-2000s Sacramento, with the wake of 9/11 trauma simmering under its surface and class tensions drive a number of its subplots. Its eponymous character, née Christine McPherson, is a restless 17-year-old intent on escaping what she sees as a claustrophobia-inducing life by attending a liberal arts college on the east coast after her impending graduation from an all-girls Catholic school. Her mother Marion (Laurie Metcalf) struggles to make ends meet as her depressed and unemployed husband Larry (Tracy Letts) undergoes the demeaning toils of a job search. Lady Bird’s older brother Miguel (Jordan Rodrigues) also lives at home, his many facial piercings rivaled only by his girlfriend (Marielle Scott), who works with him at a supermarket and has also been taken in by the family after her own mother kicked her out.

And, of course, there’s Lady Bird’s best friend Julie (Wesleyan’s own Beanie Feldstein ’15, also notable for “Neighbors 2” and, well, being Jonah Hill’s sister), a generally cheery counterpart to Lady Bird’s own cynicism who faithfully accompanies her best friend’s brief foray into the world of theater before Lady Bird finds greener pastures with cool-girl Jenna (Odeya Rush). Much like the other supporting characters of “Lady Bird,” Julie and Jenna are high school archetypes representing opposite ends of the social spectrum: one, a non-judgmental and unashamedly uncool sidekick who’s stood by Lady Bird’s side since early childhood, the other a wealthy, glossed-lip-pursing glamazon sporting a startlingly short Catholic school uniform skirt. Lady Bird’s stint as Jenna’s friend is primarily driven by her semi-relationship with walking cliché Kyle (the beautiful Timothée Chalamet), whose overt unoriginality is actually his character’s best quality, his hand-rolled cigarettes and poser-y non-conformism painfully and hilariously reminiscent of…well, every liberal arts student ever.

Lady Bird’s ultimate return to Julie, albeit predictable, is problematic only in how easily Julie lets her back in, again an echo of every single movie where the uncool friend accepts the protagonist’s humble apology all too easily. And yet, there’s still something irresistibly beautiful about the image of the two of them posing for formal prom pictures together—as each other’s dates, of course.

What’s distinct about “Lady Bird’s” many hackneyed movie moments is that, on paper at least, the film is quite autobiographical. It’s the directorial debut and brainchild of Greta Gerwig, who grew up in Sacramento, attended an all-girls Catholic school, and graduated in 2002—the year before her character graduates. The actress-turned-writer-director maintains that Lady Bird is actually quite different from herself, and pointed out in a Vulture interview the one-year difference in their graduation dates and that Lady Bird is more “wild” than she considers her past self.

A lot of this wildness is tied to Lady Bird’s theatricality—a character trait that emerges both in her interest in actual theater and in her knack for typically teenage melodrama. (In the opening scene, she throws herself out of her mother’s car mid-conversation, resulting in the bright pink wrist cast that she sports for the first half of the film.) Much like Lady Bird, the film itself often tends toward exaggeration, which might just be its saving grace. When it takes its tired character types to their most ridiculous extremes with characters like Kyle, it both acknowledges and dismisses them, poking fun of the way that Lady Bird swoons at Kyle’s Marxist streak and hand-rolled cigarettes.

At other points, “Lady Bird” softens and complicates its tropes, turning them on their side to reveal deeply complicated individuals with many layers of emotional weight. We encounter, for example, the overly sullen Miguel walking into a job interview, his long hair tied neatly into a ponytail and his facial piercings freshly removed. Even his heavily eyelinered girlfriend gets a backstory, advising Lady Bird that she should appreciate her mother while they share a very temporally appropriate clove cigarette. It’s when “Lady Bird” departs from its cookie-cutter characters and plots that the film becomes its most poignant and uniquely emotional self.

Perhaps the most exemplary subversion of movie clichés is Lady Bird’s mother, a relentlessly critical maternal figure whose constantly changing demands of her daughter make her difficult to sympathize with. And yet there are moments of softness where we are suddenly jolted from Lady Bird’s perspective to her mother’s, and we can understand her harshness as a form of love mixed with confusion at the inner workings of her adolescent daughter. It is only in a scene from which her mother is absent that this strange mixture is ultimately articulated, by a nun at Lady Bird’s school (Lois Smith) who postulates that perhaps paying attention to something is the same thing as loving it. In the scene, it’s a recapitulation of the way Lady Bird feels towards the city of Sacramento, but it’s also the singular assertion that pulls together the threads of this film, uniting the many relationships of its character network.

But at its heart, “Lady Bird” is a study of what it means to care about someone. It’s an inquiry into love in every sense of the word: love between romantic partners, love between family members, love between friends, love between exes, and even love between strangers. It’s about the types of kindness that emerge when a struggling nurse agrees to take in her son’s evicted girlfriend, or when a gay teenager in a Catholic family (Lucas Hedges) turns to his blindsided ex-girlfriend for the support he needs. Its cutting wit is tempered by moving portrayals of surprisingly dimensional characters whose kindness, expressed by each in unique and often untraditional ways, cracks open their predictable molds. And in doing so, it ends up feeling strangely real and welcomely refreshing.