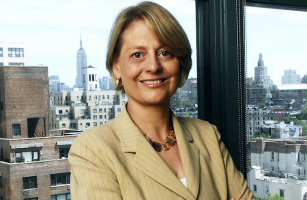 “Under Walker’s leadership, New York Public Radio has increased its monthly audience from 1 million to over 26 million, raised more than $100 million in long-term investment, and led as one of the most influential producers of podcasts since the earliest days of the medium,” a biography from WNYC’s website reads. Walker’s presidency began in 1996, it adds, when WNYC was transitioning from a city-owned institution to an independent one.

“That was something that gave me incredible inspiration,” Walker said. “She’s terrific.”

Walker described her introduction to journalism, which she says began with a paid internship, during a semester off, with WGBH in Boston. During that internship, her editor encouraged Walker to go into a prison and ask the prisoners themselves why they were protesting. Those interviews marked a turning point in her career as a journalist.

“What it really taught me was about the power of story, the power of asking those who are the victims to tell their own story,” she said.

After graduating from Wesleyan, Walker reported in print and produced for NPR. Then, in a bit of a vocational shift, she earned an MBA from Yale University’s School of Management. When she was considering joining the world of consulting, however, Walter said she still felt a “niggling” from her reporter’s instinct.

“I was a journalist, I loved media, and I really wanted to figure out how we could use media for good,” she said. “What is it that I can do with both my business education and my journalism education?”

The answer to that question would come, oddly enough, from Sesame Street. Walker recounted the show’s origins, which, according to legend, began at a Manhattan dinner party where Carnegie Foundation Executive Lloyd Morrisett happened to mention his daughter’s relationship to TV at a table of television producers.

“Lloyd told [the table] a story about his three-year-old daughter, who was entranced with TV commercials, and who could remember jingles and slogans after only hearing a commercial two or three times,” Walker recounted. “At that dinner, [the show’s creators] came up with a brilliant idea: What if they could use the techniques of advertising not just to sell McDonald’s hamburgers and candy, but to teach kids to read, to prepare them for school. And that’s how Sesame Street was born. It was out of that question, ‘How can we use media for good?’”

Walker worked at Sesame Street and then took its aim of using media for good to the radio. At WNYC, she said, this philosophy drove her work from the start.

Nowadays, people in media face the challenge of combating an increasingly sectarian and polarized American public.

“We benefit in so many ways from the digital revolution,” she began. “But it feels so much of the time that something vital is at risk, something vital for our democracy, for ourselves, and for our families. Why is that? Because we’re ever-connected. We are always ‘on,’ and increasingly isolated, addicted to devices that have fundamentally changed how we interact with the world, and how we interact with each other.”

On the state of journalism, Walker discussed four trends she’s noticed. First, she said, is an extraordinary uptick in investigative journalism, like The New York Times’ breaking feature on alleged serial predator Harvey Weinstein and Andrea Bernstein’s investigative reporting for The New Yorker, which revealed that Ivanka and Donald J. Trump lied to the public in the process of selling the Trump SoHo development. Second, she said, is that journalism is under attack, from outlets like Breitbart and Fox News to the president himself. Third is the development of fake news, especially that which is spread by Russian intelligence agencies and amplified on platforms like Facebook. Finally is a crisis of local journalism: National coverage garners more page clicks and advertising revenue, she said, to the detriment of local reporting.

A lively Q&A followed the talk. Most questions reflected a sense of anxiety about the state of U.S. democracy, the United States under President Trump, and a perception that journalism is facing crises on multiple fronts.

“In this insular world where everybody goes to the channel that supports their view, how do you support the discourse that needs happen to get views from across the aisle to happen when you’re only reaching 10 percent [of New York listeners]?” Walker asked.

“What we’re thinking when we’re doing something like [the podcast] ‘Indivisible,’ is we’re trying to bring the country [together],” Walker continued. “That was definitely trying to cross the divide, and you have to bring someone like [conservative commentator] Charlie Sykes, or others in to host the conversation…. I think we also have to reach out to more and more people.”

Another audience member asked about WNYC’s decision to accept money from the Koch brothers, who are often criticized for funding right-wing politicians and organizations. Walker maintained that it was a tough decision, but that there was “no way” the company accepted the donation with the intention of it not changing the editorial content of WNYC.

“That is the number one rule of journalism,” she insisted.

Walker then responded to an audience member asking about her advice to undergraduate students interested in journalism.

“I believe from the journalistic point of view, if you’re interested in reporting, I think that radio stations around the country and places like ProPublica and the Marshall Project are going to be able to get more funding to expand,” she said. “So I would concentrate on the nonprofits because they have a real mission and they have the stability of funding that the for-profits don’t. The second thing is podcasts. We are no having trouble holding on to staff who just get offers all the time because everybody is doing a podcast…. So get some [podcasting] experience.”

Walker emphasized WNYC’s leadership in the podcasting sector. WNYC is the second-biggest studio producer of podcasting content in the country. Furthermore, Walker added, it has done so under a successful business model.

Another audience member asked about a harassment incident at NPR and how that’s affected her personally. The head of news at NPR, Michael Oreskes, was asked to resign after allegations of sexual harassment surfaced.

“It’s deeply disturbing…. I think it is part of the #MeToo [social media campaign],” she said. “But, you know, two of those [harassment incidents] happened at The New York Times. I think there’s a culture, I will say, in journalism, that all journalists and journalism [have] to change. And I would say there are a number of female CEOs, presidents of public radio stations, and we need to take the lead.”

Another audience member drew attention to what he referred to as the “Sinclair Process.”

“The vacuum that’s been filled there is really frightening,” the audience member remarked of Sinclair’s disproportionate influence on local broadcasting. “Since when did the truth become so relative?”

Walker affirmed the audience member’s concerns and tacked on a question of her own.

“Or become fake?” she replied.