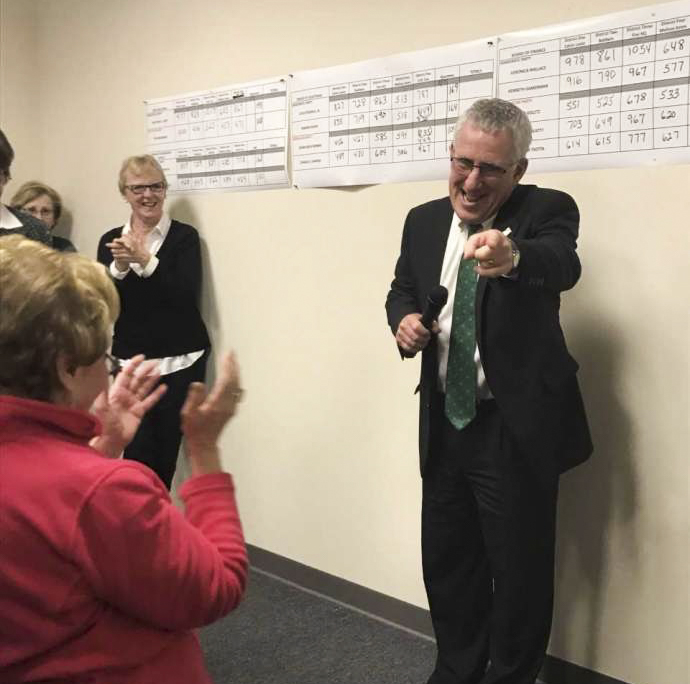 In the weeks leading up to the 2017 off-year elections, University students—primarily members of the Wesleyan Democrats (WesDems)—helped to campaign for local candidates. Most notably students worked for Matthew Hoey ’78, who ran for First Selectman of the town of Guilford. Hoey later won the seat, in part due to the efforts of University students. WesDems also organized a panel for candidates running for local Middletown offices in order to promote civic engagement within the University and Middletown community.

Around 20 students dedicated the weekend of Nov. 4-5 to canvassing for Hoey, the Democratic candidate for First Selectman. Guilford, which is located east of New Haven and about 40 minutes from Middletown, was the site of a tight race between Hoey and his Republican opponent, Kenneth MacKenzie. The incumbent First Selectman was also Republican, marking Hoey’s victory as one of the many flipped seats throughout Connecticut within the 2017 election series.

After the election, Hoey noted his appreciation of his victory and explained that he would continue to work with MacKenzie despite their differences.

“We’ll be working together because he’s going to still be on the Board of Finance, and I look forward to continuing to work with Ken,” Hoey said, quoted in an article in the New Haven Register. “And even though we have different ideas on different things that doesn’t mean that we still can’t work together, and we will work together.”

Alexandra Prendergast ’20, co-chair of WesDems, was the driving force behind the organization of student involvement with Hoey’s campaign.

“I used to be a Senate page for [Connecticut Junior] Senator Chris Murphy…and the person who coordinated the page program—his name is Sean Scanlon, he’s an outreach director in Chris Murphy’s office and he’s also a state representative in Guilford—reached out to me because he was working for Matt Hoey’s selectman campaign and asked if it would be possible to get some Wesleyan volunteers together, because Hoey is a Wesleyan alum,” she explained.

After Scanlon’s inquiry for University students, Prendergast emailed WesDems members and received substantial interest. Transportation was provided for students, as well as compensation of $15 an hour for the time they worked.

“A lot of the time, in really small elections, you can flip an election with ten people who choose to go out and canvas one weekend, because canvassing is critically important to voter contact, and people will remember a face when you walk up to their door and knock on it,” she explained. “And so to have 10 to 20 people go into a small town and knock on 415 doors in a day, that flips a lot of votes.”

Simon Korn ’18, Prendergast’s co-chair, also noted the importance of knocking on doors rather than simply calling or sending emails.

“The most important thing when you’re campaigning is actually making contact with people face to face,” he explained. “If you’re on the phone, then you’re basically a telemarketer, and they can hang up and ignore you…and sending them flyers works even worse than calling. So really the most important thing is knocking on the door and talking to them, which is volunteer power, and which is where colleges come in.”

Rather than campaigning in Guilford, Korn volunteered for Fight Back CT, an organization created by Murphy to fight President Trump’s policies and prevent him from reelection.

“Some organizers from Fight Back CT came to Wesleyan for a ‘barnstorm’ to talk about their organizing efforts, and the WesDems offered to volunteer in some of the towns that were holding municipal elections in 2017,” Korn explained. “It ended up being a great experience—I saw parts of Connecticut I never would have seen otherwise and met some really cool local activists and volunteers.”

Murphy was a driving force for many of the city-wide political efforts and helped to encourage both Prendergast’s and Korn’s, and by extension WesDems’, involvement in various campaigns. As results came in, Murphy tweeted his excitement about the cities in Connecticut that turned from Republican to Democratic. Murphy mentioned Guilford amongst a dozen towns.

Prendergast and Korn both pointed to other efforts WesDems has been making with regard to small elections. A recent panel of candidates for the local Planning and Zoning and the Board of Education committees was hosted at the University.

“Candidates for those seats came to a forum, hosted by WesDems, where students and faculty were able to come in and sit and listen to the candidates and get an idea of who they would be most interested in voting for,” Prendergast explained.

Prendergast noted the value of student involvement, especially for smaller races within Connecticut, and said that she finds the recent flips from red to blue in many Connecticut towns encouraging.

“We’re seeing a lot of these changes take place,” she said. “We’re seeing political activism on the part of college students, a willingness to give up their Saturday and Sunday to engage politically, and I can only hope that we maintain this momentum. Democracy fails when people aren’t engaged, and this is, in a sense, promoting that democracy. There’s still a lot to be changed, but this is a start.”

WesDems is continuing to prepare for the 2018 elections, and both Korn and Prendergast note that all students interested in getting involved are welcome.