Professor Devoto Re-Elected to the Middletown Planning and Zoning Commission 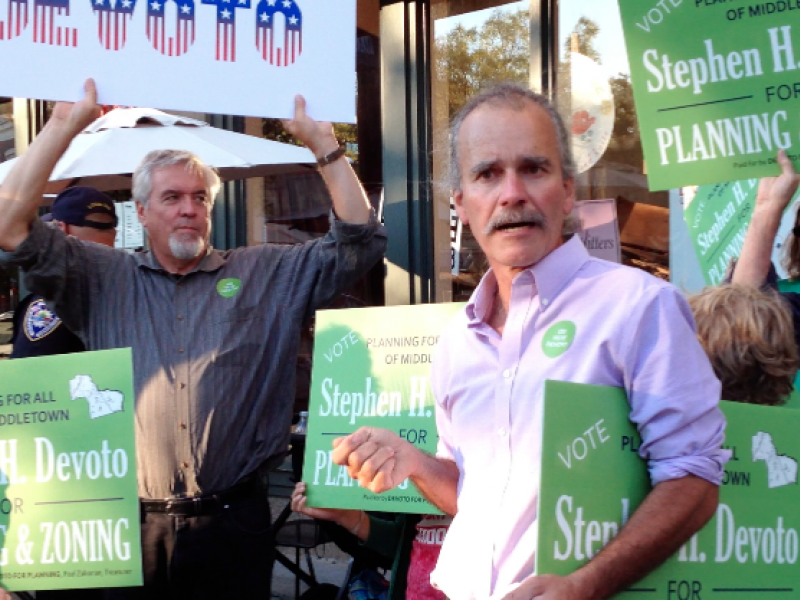 One of the University’s own and Middletown resident Stephen Devoto, Professor of Biology, was re-elected to Middletown’s Planning and Zoning Commission on Tuesday, Nov. 7.

This election marks the beginning of Devoto’s second four-year term. He initially ran and was elected to Planning and Zoning in 2013 due to his interest in the environmental impact that Middletown could have.

“A lot is determined by what we build, where we build it, and what we don’t build,” Devoto said. “For example, suburban sprawl is environmentally very costly—there’s more asphalt, more plumbing, more electricity, and more driving by the residents…. In our state, all land decisions are made by local planning and zoning commissions.”

The Middletown Department of Planning, Conservation, and Development provides a description of what is expected of the seven members of the Commission and three alternate members.

“Middletown’s Planning and Zoning Commission reviews applications for development, subdivisions, new lots, special exceptions, changes to the Zoning Code, and changes to the Zoning Map,” the website reads. “The goal of these endeavors is to conserve, revitalize and protect economic, social and environmental resources, as well as ensure that development occurs in a manner which is consistent with existing municipal land use, economic, design and environmental policy.”

Devoto’s impetus for running in 2013 was spurred by the Planning and Zoning Commission’s decision to allow for a drive-through in a strip mall to be built across the street from the University. According to Devoto, rumor had it that a Starbucks, a Chipotle, and a bookstore were going to occupy the space on Washington Street between High and Pearl.

“That neighborhood is a state highway, however literally one house off that is [where] families with kids who walk to school, walk downtown, and walk up to Wesleyan, live,” Devoto said. “It’s a residential neighborhood with a highway going through it.”

Both the Middletown community and students at the University were opposed to this development, Devoto said. Despite that, the Commission voted to allow it.

“They changed the code to allow that to happen,” Devoto said. “I was one of the many people really upset by that decision. I decided that I would run because I wanted to get out of office someone who had voted for it and hopefully bring a different point of view to planning and zoning.”

During that incident four years ago, Devoto felt that the commission did not listen to Middletown residents and neighbors who spoke out against their decision. As he did in his previous term, Devoto hopes to continue to involve the public in these decisions.

“I send out periodic newsletters to try to inform people,” Devoto said. “When people speak at the commission, I try to encourage that and bring people in…. I make sure I evaluate all the applications fairly and go through them thoroughly and go out to visit the sites to see what is being proposed.”

Another goal of Devoto’s is to change the zoning code. Zoning codes deal with decisions that determine which parts of town are to be designated for residential and different business and industrial spaces.

“My goal going in was to increase the amount of planning and to change our zoning code to make it more up-to-date, to promote vibrancy, in particular, to promote environmental sustainability,” Devoto said. “I’ve tried to encourage the staff at city hall to update our code in order to do some more planning. Tonight, we’re considering a code change that revolves around parking and electric vehicles charging stations, so that’s an example of changing the code to promote environmental sustainability.”

During the past term he served, Devoto encountered difficulty with zoning innovation. In part, this is because any changes to the code require the eye of a professional who can write and understand legal and technical aspects of zoning and codes.

“I’m not equipped to do that so we need staff to do that” Devoto said. “The city doesn’t have anyone with that expertise right now…. I’d like to change our code in a way that reduces our environmental footprint, makes development more sustainable and carbon emissions lower. Long-term, it could make the city an example for environmental sustainability.”

Although Devoto is immersed in the science department at the University, he got involved with the Middletown local government as a resident.

“I own a house, and my kids go to school,” Devoto said. “As a resident, I want to be involved in what happens to my city and to give what I can to the city. My involvement didn’t come from Wesleyan at all. That said, I would love to have more involvement from Wesleyan students and Wesleyan staff and faculty in our city.”

In this vein, Devoto is currently working with a group of students on campus in an effort to examine Middletown zoning in the hopes of reducing the environmental impact of buildings and Middletown life as a whole.

“The kinds of things that are on the national and international news that students are rightly upset about, I think there are small things we can actually do in Middletown to help,” he said. “I can serve as a conduit.”

Camille De Beus can be reached at cdebeus@wesleyan.edu or on Twitter @cdebeus.