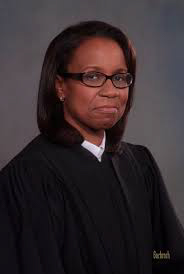 On Saturday, Nov. 4 at 4 p.m., Denise J. Casper ’90 spoke at the 25th annual Dwight L. Greene Symposium in a speech titled, “From Foss to the Bench: One Alumna’s Journey to a Career as a Federal Judge.” The event, held in Memorial Chapel, was sponsored by the Black Alumni Network and the Alumni of Color Council.

Dwight L. Greene ’70 was a Hofstra University law professor and graduate of Harvard Law School. He specialized in banking law and critical race theory. Since Greene’s premature death in 1993, Wesleyan has hosted an annual symposium in his honor to encourage reflection on the University’s engagement with underrepresented groups. Greene has been described as a brilliant scholar and dedicated advocate for social justice.

“Casper ’90 has been serving as a district judge on the U.S. District Court for the District of Massachusetts since 2011,” reads a description of the speech from the Family Weekend program schedule. “In 2014, she received the Trailblazer Award from Massachusetts Black Lawyers’ Association in recognition of her contributions to both the bench and the bar. In 2015, Wesleyan University honored her with a Distinguished Alumna award.”

President Michael Roth ’78 started the event by introducing Casper before ceding the stage to the presenter.

Casper identified five components of her Wesleyan experience that she feels prepared her particularly well for her career. She said her concentrations in U.S. History and African American Studies gave her an understanding of the important role governments and courts play in enforcing the rule of law and protecting civil liberties. Her senior thesis advisor encouraged her interest in law. Her various experiences with the intensive writing required by Wesleyan coursework, positions as a Resident Advisor, an 8 to 8 responder (which she said both trained her to listen intently), and an adjudicator in cases of honor code violations also provided a strong foundation for her future.

Casper then briefly recounted her career after Harvard Law School: She clerked for two judges, spent two years in civil litigation, worked in the U.S. Attorney General’s office as a federal prosecutor, and then served as deputy district attorney in Middlesex County, Mass.

“Through these experiences, I learned the importance not of winning, but trying to seek justice,” she said. “I learned so much as a trial attorney, and I envisioned a career that would continue in public service. I did not, however, have a long-term ambition of being a judge.”

Casper then guided the audience through the lengthy and grueling nomination process which began back in June of 2009. Massachusetts Senators Ted Kennedy, John Kerry, Paul Kirk, and Scott Brown all oversaw the operation at different times. Casper, recalling that the FBI, American Bar Association, and Department of Justice conducted their own thorough vetting processes, joked that Wesleyan undergraduates should be on their best behavior and make wise choices. She was sworn in on Jan. 11, 2011.

Casper discussed the breadth of civil and criminal dockets which cross her desk, the colleagues she works alongside in Boston whom she admires, and her duties outside of the office, such as working group seats. She also expressed gratitude that dockets are randomized, because a rookie judge is just as likely to score a high-profile case as a senior judge.

Perhaps in keeping with the reticent public profile expected of a District Court judge, Casper would no more than allude to President Donald Trump’s latest criticisms of the judicial branch of the U.S. government. She responded to attacks from “some quarters” by defending the judiciary, a branch she regards as essential.

“Of late there’s been more pointed criticism of the courts and the people who serve on the courts,” she said. “From some quarters, the criticism is not merely of any particularly judicial opinion, but of the very notion of judicial review as a check and balance of the exercise of legislative or executive power…I think there’s a difference between a critique of the merits of our rulings and a questioning of the legitimacy of the third branch. As I’ve said in other forums, the former is fair game, and the latter, to me, is more alarming, since questioning the legitimacy of the constitutional role we play undermines the very tripartite system that our founders envisioned.”

Chair of Wesleyan’s Alumni Association Tracey Gardner ’96 then introduced Victoria King ’18, the 2017 recipient of the Black Alumni Council Memorial Prize. King is a Government and African American Studies double major who has expressed interest in law and public advocacy.

“I first met Victoria three or four years ago,” Gardner said of King. “I was immediately impressed by her poise, her candor, her accomplishments as a student and student leader, and also by her desire to push Wesleyan even further along in our efforts to make the campus environment more equitable and inclusive for students of color. I was not surprised when I learned Victoria had won the Memorial Prize…[for she] embodies both the spirit of the memorial prize and also the legacy of Wesleyan.”

The Memorial Prize is one of three annual awards given by the Office for Equity & Inclusion. All three of the awards seek to aid the career goals of outstanding students who are historically underrepresented in higher education. The prize allowed King to take an unpaid internship with the D.C. Public Defender Service this past summer.

King gave thanks and proceeded to discuss her demanding summer experience in the Service’s trial division. Only two days after training, King had to drive out to Maryland, conduct an interview, and return with a signed statement for her supervisor by the following workday.

King left the audience with three reflections. She first emphasized the importance of promoting justice through public defense, citing the right to a lawyer that the sixth amendment guarantees. She then called attention to dynamics of race, class, and gender at play amongst the program’s interns. Because the program is unpaid, the majority of interns were white and affluent. Finally, she expressed that the internship instilled a new sense of urgency in her to fight for comprehensive criminal justice reform.

“My attorney asked that we go inside a jail cell,” she said. “In the midst of that experience, I was granted an up-close look at what prison actually does to people and what it looks and feels like. It reaffirmed all the things that I had heard about mass incarceration and our prison system. But to see it up close, you get a different feeling. There’s a very different sense of urgency that I have gotten from that experience … Hearing [our clients’] stories restored some humanity in what is a very dehumanizing process.”

Chair of the Black Alumni Network Nyasha Foy ’06 concluded the event. To express Greene’s ideas in contemporary terms, she read a segment from Kanye West’s “Ultralight Beam,” originally performed by Chance the Rapper.

“This is my part, nobody else speak / This little light of mine / Glory be to God / I’ma make sure that they go where they can’t go / If they don’t wanna ride I’ma still give them raincoats / Know what God said when he made the first rainbow / Just throw this at the end if I’m too late for the intro.”

Foy spoke about Greene, lauding his work and character.

“Dwight was that first rainbow,” Foy said. “From that moment when he spoke he had something to say. And his life story is the reason why we’re gathered here today. Because of him, where he went, we can now go, and maybe go further. Judge Casper, you and your life story is a testament to this. You made sure to go where we hadn’t been before.”

Foy then related the actions and ideals of King to those of Greene.

“I don’t know how much you know about Dwight’s story…but you have picked up [his] torch, and you are leading,” Foy said.