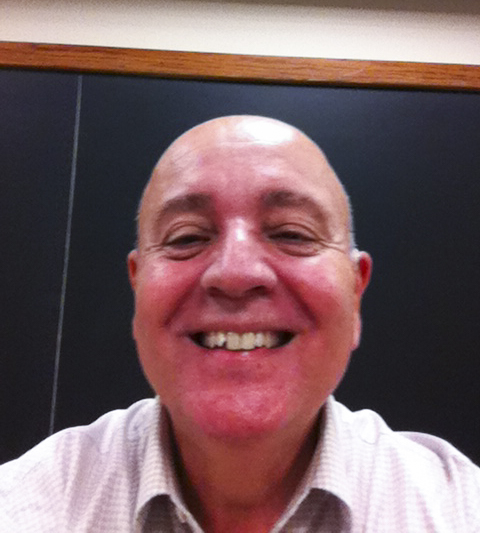 After making a last-ditch lap around Pi Cafe, I seriously thought the Visiting Instructor in American Sign Language (ASL) was blowing me off. Little did I know we both had been sitting no more than two feet away from one another for the whole of the 20 minutes past our set time to talk. I had begun to begrudgingly pack away my things when I noticed a man next to me stand to go. It was at the door that he held out for another patron where he carried on a silent conversation, signing small talk with the thankful student, when I realized Joseph Basile was walking away from me. I chased after him, struggling to find the words to explain the misunderstanding.

My low vision hasn’t fared well in light of a recent eye surgery. Putting new names to new faces has become more of a challenge for me and yet Basile, in his compassionate demeanor, waved away my doubts. We immediately set out to find a space to chat, a table shady enough for my sensitive eyes, but also one blocked from the winds. Gusts can often interfere with hearing aids. Since the age of 10, Basile has experienced a slow decline in his sense of hearing. Despite receiving a diagnosis of what was to become moderate to severe bilateral hearing loss at such a young age, the setback has proved only a catalyst in the career of this storied activist, instructor, counselor, and social worker.

“I lost quite a bit of my hearing and then you start to wonder will I lose more, and if I do, what do I do with that?” Basile said of his initial motivations for learning ASL. “It kind of fulfilled two needs in terms of my interest in it, and also, how would it assist me down the road? I might need to have it.”

Three years after receiving a bachelor’s degree in psychology from University of Connecticut in 1976, Basile began working as a school and mental health counselor at the American School for the Deaf (ASD) in West Hartford, Conn. This decision marked the beginning of what became an almost three-decade-long working relationship with the school. After a brief time away in the 1980s, he returned to ASD where he went on to work as a clinical coordinator and administrator until 2013.

During the early ’80s, Basile received a master’s degree in Deafness Rehabilitation Counseling and became a Berger Scholar at New York University. He then went on to work at Connecticut Valley Hospital (CVH) and, through legislative lobbying, helped to secure appropriations for both inpatient and outpatient units to treat deaf and hard of hearing mental health consumers. One of Basile’s most notable accomplishments as a disability rights advocate and lobbyist came in the form of his successful campaign that pushed for the funding of a group home for adult deaf mental health consumers.

“There was just nowhere for these adults to go,” he recalled. “We ended up getting the group home in West Hartford…. Some of the deaf patients that I [previously worked with] at CVH got out of there and went to the group home, went to supervised community living. Some of these people had not been able to communicate with anyone for almost 20 years, and I saw them working.”

Throughout his career, Basile has taught classes and lectures at universities across Connecticut on deaf culture. He has immersed himself in advocacy groups and campaigns, clinical workshops, and training regarding the communities of deaf and hard of hearing people on both the state, regional, and national levels regarding hearing loss, culturally deaf people, hard of hearing people, late-deafened persons, and oral-deaf persons.

In the summer of 2013, with plans to retire, a former supervisor had suggested he apply for an opening at Wesleyan’s ASL program.

“I had this fantasy,” Basile laughed. “I was gonna maybe mosey around the country or the world for six months and then the phone rang before I ever got out of the door at ASD.”

Basile, in the end, decided to table his travels for Wesleyan’s burgeoning program. Here, ASL is situated in the Less Commonly Taught Languages Department and has, to Basile’s knowledge, been around for almost 20 years.

Basile, who will be finishing up his fifth year at Wesleyan come May, says that due to the limited size of the University’s ASL program, it operates from a unique pedagogical standpoint in its blending of deaf culture and language topics into individual syllabi. His courses are popular, with nearly 30 to 35 students on waiting lists for enrollment each semester. The administration responded by adding a section of ASL I and II; albeit lessening the pressure to a degree, some still wait.

“The goal for [my students often] is, when they get out of here, maybe they go to med school, they may become a doctor, they may become this or that, but they will be able to communicate with their deaf patients, whoever they’re running into,” Basile said. “They may not be able to describe the intimacies of the surgery that’s about to unfold but they can point them in the direction for more resources.”

This year, the administration issued a directive to change the grading methods of all Less Commonly Taught Language courses from graded to pass/fail. This caught many students by surprise.

“About the fifth week into this whole thing students came up to me and asked, ‘What’s the deal with the class being pass/fail?’” Basile said. “I didn’t know anything about that.”

Basile has no intentions of changing his teaching philosophy.

“I’ve been in administration too,” he said of his time at ASD. “Sometimes things get decided and sometimes you’re privy to them, you’re part of the discussion, sometimes you’re not. I understand that end of things…I’ll continue to do my numerical grading for purposes of coming up with a pass/fail. Some students hate it because it’s a binary kind of a grade. You can’t tell if it’s an A or a C and for students applying to med school, I see a kind of an objection there…I can understand where they’re coming from. They’ve taken it upon themselves to address that and from there where it goes, it goes.”

“I hope I’m here a long time at Wesleyan,” Basile added, then transitioning to his desires for the ASL program down the road, “At the very least I want to see the viability of the program, at least see it maintained where it is. I don’t have the crystal ball as to what is happening. Sometimes we need to look at programs and tweak them a bit. Nothing’s perfect but I think it’s important that we stay.”

Despite this recent shift in evaluation, Basile went on to stress how far deaf rights have come since the movement began to take shape and the language was finally recognized in the 1960s.

“Oh my goodness, it’s like day and night,” Basile said. “My wife Marie is profoundly deaf. The discussion we’re having, she wouldn’t be able to hear your voice, although she’s a gifted lip reader, a rarity. She was in the store the other day and someone noticed her hearing aids and started signing to her. It’s little things like that.”

Though hard to track in terms of numbers, based on research from Gallaudet University—the first federally chartered university for the deaf, which opened in Washington D.C. in 1864—ASL fluctuates among rankings as the sixth to fourth most used language in the United States.

While deaf advocacy, education, and awareness have certainly increased over the years, for Basile, there’s always more work to be done. According to the Hartford Courant, last year’s cuts to the deaf and hard of hearing unit in the Department of Rehabilitation Services have the potential to affect anything from access to interpreter representation in courts to public service announcement translations of inclement weather forecasts.

“There were about 40 interpreters in the state of Connecticut,” Basile said. “With Governor Malloy’s cuts—they were 10 percent or so—the interpreters were under [the Department of Social Services] and instead of making cuts across the board, [Malloy] just cut out all of the interpreters.”

While his days of storming town halls might be less frequent, Basile says he’ll be around to provide support for future advocacy campaigns.

“I’m always open to discussion and being there to assist within our communities of those with hearing loss,” Basile said.