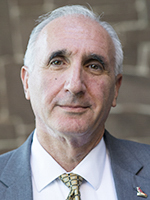 This October, University President Michael Roth ’78 announced via email that Vice President for Finance and Administration Nathan Peters would be retiring after this fiscal year. Peters, who joined the University in 2003, has been integral in stabilizing its short- and long-term finances as well as developing ties with the Middletown community. As Roth wrote, the administration will consider “What would Nate do?” when encountered with any new problem. The Argus sat down with Peters to discuss his time at the University and his plans for the future.

The Argus: How did you first feel coming to Wesleyan?

Nathan Peters: I was in the process of deciding whether to accept the job, and the president of the university where I was working gave a speech about increasing the value of the school. Then he started talking about what a great school Wesleyan is and how he hoped down the road we can get some of the students that normally would go to Wesleyan. I felt that I received a sign so I accepted the job. I was very excited about coming to Wesleyan as it is one of the best schools in the country (and got me closer to NYC). Who doesn’t want to be associated with the best?

A: Can you describe some of the major financial projects that you’ve worked on here at Wesleyan? How will some of these projects continue to develop in the future?

NP: When I first came to Wesleyan one of the first things I worked on was the e-billing system. We were one of the first schools to eliminate paper bills and go all electronic. It was a big deal back then. I have been involved in around seven to eight debt financing activities (new issues, refinancing, derivatives, etc.), including the century bond in 2016. The finance team put in a new financial system around seven years ago and we have gone relatively paperless in its operation. I have worked on implementing three strategic plans and capital campaigns. Of course, there was the economic downturn in the late 2000s and dealing with less revenue because of the lower endowment market value, less annual gifts, and providing more financial aid.

A: How has working with other staff been on projects?

NP: During my time here there has always been facilities projects, primarily how to fund them, but I am now more involved in the whole process. All of these projects are in some way related to the goal of Wesleyan’s financial stability. It would be wrong of me to leave the impression that I accomplished any of these on my own. Work in Finance & Administration is very team oriented within the division and also across campus. We work with all the academic and administrative areas and it is very collaborative.

A: Can you describe the importance of the century bond Wesleyan recently obtained?

NP: We were able to take advantage of an economic period where taxable interest rates were low and investors were willing to buy 100-year bonds. It created stability in our debt service expenses as it is a fixed amount for 100 years and should decrease as a percentage of expenditures over time reducing long-term budget stress. Because of the time frame of 100 years and the phenomenon compounding, we could set aside $2 million today and expect it to grow to $250 million in 2116 when the principal payment is due for the century bond. It also freed up $44 million in reserves that can be invested alongside the endowment and grow for future capital uses until it is needed. Again, the overall goal here was to use this approach to further the strategic goal of Wesleyan operating within a framework of economic sustainability.

A: What type of work have you done with the Middletown community? How have you felt about this work?

NP: My work with the Middletown community focused on the last three years with moving the bookstore to Main Street, tennis court renovations, and working with the Chamber of Commerce and city on the Innovation Places project.

A: How was working to bring R.J. Julia to Wesleyan’s new bookstore on Main Street?

NP: Bringing the bookstore was a different type of project because it had both an academic and economic component. The retail aspect of the store made having the right Main Street location and operation managers for bookselling and food very important. A vibrant Middletown community benefits everyone. Wesleyan faculty, staff, and students fill dual roles. Wesleyan’s commitment to Middletown will continue and evolve as the community evolves.

A: Do you have memories or funny stories from your time at Wesleyan that you would like to share?

NP: In my role, I got to sign the contracts for the Spring Fling performers. My colleagues thought it was funny, given my age, that I actually knew (and went to Spring Fling for) some of the performers. I was excited to see Dirty Projectors and Chance the Rapper, but missed out on Kendrick Lamar because I was away. I like the Wesleyan bands Chef and Overcoats.

A: What effort are you most proud of from your time at Wesleyan?

NP: I am most proud of being seen as a collaborative and helpful partner with faculty, staff, students, alums, etc. over the past 15 years in fulfilling Wesleyan’s educational mission. Wesleyan faculty and staff care a lot about this place and are devoted to make it great. I am both lucky and grateful, having had the opportunity to work here and be part of this culture. My involvement with finance, human resources, sustainability, and facilities involved me in all the myriad aspects of college life and that made it professionally fulfilling.

A: Do you have specific retirement plans after Wesleyan?

NP: I plan to move to South Beach, soak in the sun, continue running, travel, and see my kids more often.