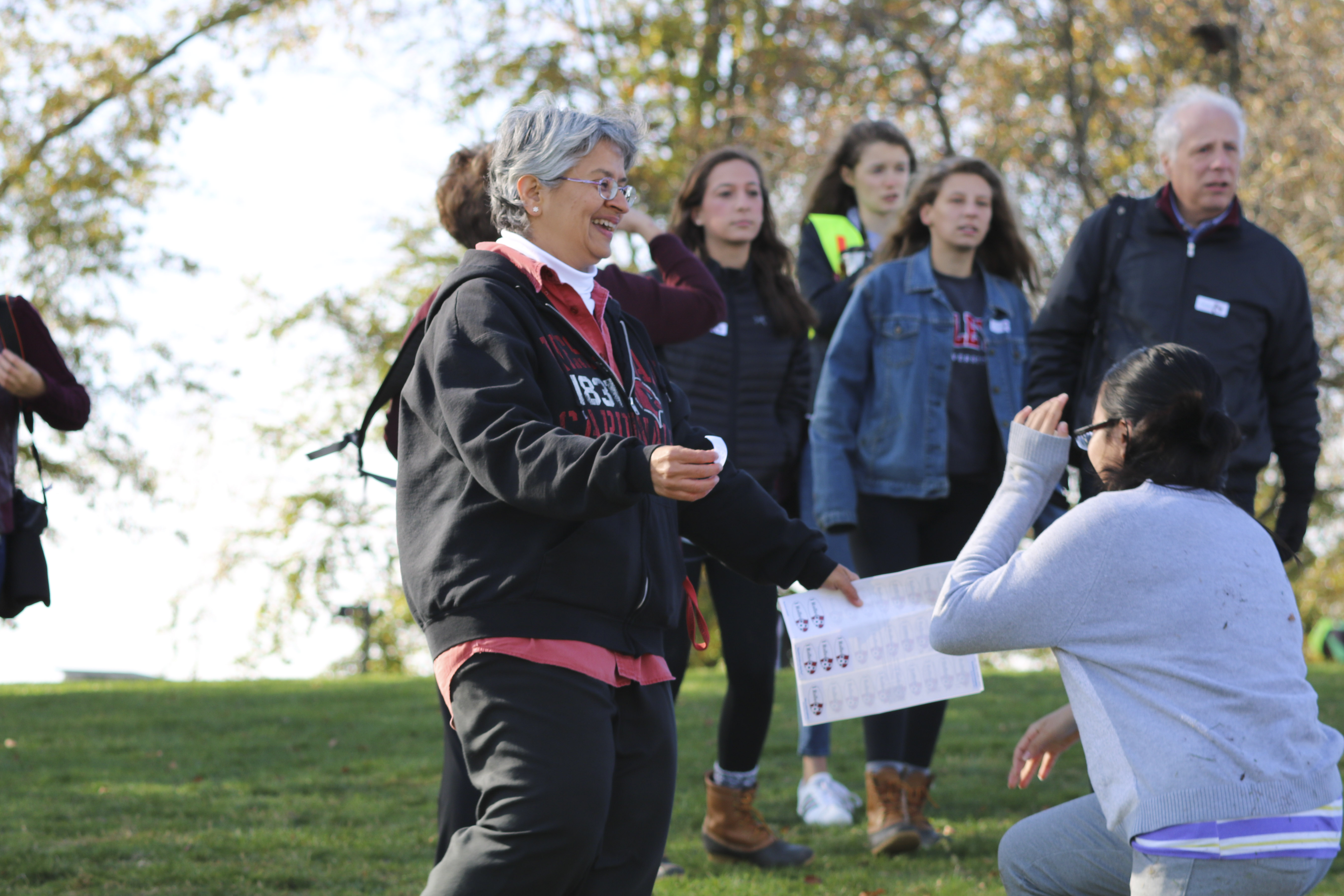 On Saturday, Nov. 4, hundreds of students and their family members, in addition to a number of residents from the Middletown community, rolled down Foss Hill in an attempt to break the Guinness World Record for the number of individuals rolling down a hill within the span of an hour.

With a final count of 520 people within the first hour and 700 within two hours, the University missed the standing record of 600 people within one hour. However, the event was still considered a success by many participants, as well as the event’s sponsor, Wesleyan Mathematics and Science Scholars (WesMaSS).

This event was the first large-scale event hosted by WesMaSS, and took place from 10 a.m. to 12 p.m. Rollers walked up to the top of Foss Hill and entered into three lines, which led to large blue tarps that the participants rolled down. At the bottom of the tarps, participants were helped up by volunteers and given stickers that read “I rolled!” Many participants stayed in the vicinity to watch others roll down the hill.

The idea for the event came from within the program WesMaSS, originating with a sub-group which was tasked with identifying a potential world record to attempt to break through the aid of the University and Middletown communities. Because Foss Hill is considered an iconic University landmark, the group decided that the number of people rolling down a hill within a certain span of time would be a feasible and fun record to break. After researching the logistics involved in breaking a record and contacting Guinness, a plan took formation. Much of the planning occurred in the spring of 2017, and then later this fall.

Melisa Olgun ’20, a member of WesMaSS, was an instrumental member in the process of planning this event.

Additional rules included positioning three cameras around the tarps and pointing them towards the rollers, with one positioned at the end of the tarps, one filming from the side, and one located at the beginning. A present representative from Guinness was not necessary for the record to have counted, as alluded to by Olgun, as two professors could sign off that the record had been broken.

Volunteers who tallied the number of rollers could only count up to fifty each, and as such, twelve stewards were responsible for counting. Additional volunteers helped direct people where to roll, or helped them up off the tarp afterwards. In total, there were 25-30 individuals outside of WesMaSS assisting.

Olgun noted that WesMaSS already has plans to attempt the roll again, potentially during orientation of 2018. Likewise, though the event didn’t culminate in a record-breakage, she was still proud of how it turned out. 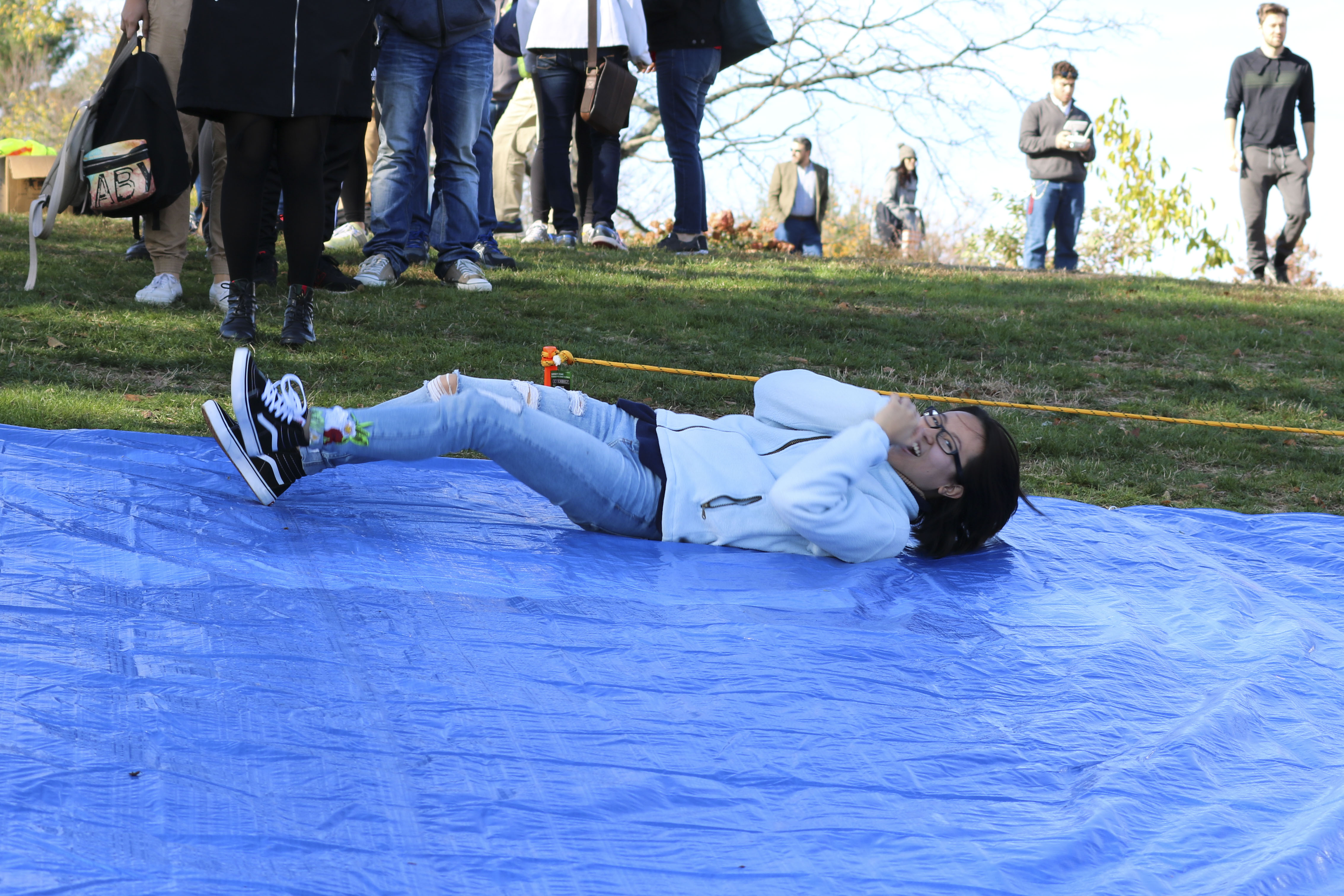 “Something that was really important to me that I really liked seeing was that a lot of people from Middletown came, and a lot of younger students from the elementary students and middle school students came to the Big Roll,” she explained. “It was great to see that Foss was really being opened to everyone else, and that’s all I really care about.”

Samantha Schreiber ’19, who is a member of WesMaSS and came to show her support for the event, explained that despite the fact that the record wasn’t broken, she too still felt it was worthwhile.

“Although we didn’t actually break the record, it was a great way to raise awareness for WesMaSS and to just get our name out into the community because it’s technically still a pilot program,” she explained.

Multiple participants noted their excitement at having participated, including the owner of WesWings, Ed Thorndike ’89, who later tweeted about the event, in response to a tweet from Olgun.

“Still fun & enjoyed watching the grandma from Dallas roll down Foss,” the tweet reads. I’m wearing my sticker all week/’cause ya know/that’s how i roll.”

The grandma from Dallas in question is Anne Snyder, who came to the University with her husband to visit their granddaughter Grace Snyder ’20. She explained how enjoyable she found the roll, particularly because it was so inclusive.

“When we first saw about it, it seemed like the most wonderful, inviting thing to do,” Snyder explained. “The adverts were so inviting, for all ages; no one said ‘No, you can’t do it,’ for this reason or that reason, and when you got to the hill, it was the same way. Dogs were running around, and little kids doing the roll, and parents, grandparents, students, so it just made you feel like you were in [an] inclusive environment. That’s what Wesleyan projected to me, and that’s why I wanted to be in the roll. It didn’t matter if you won because you could still say you were participating in the first attempt.”

“It was fun to see people roll, and especially fun to see all the different generations rolling, because it was parent’s weekend,” Snyder explained. “Everybody seemed to be having a good time, especially the little kids! They were just enjoying rolling down the hill, and having fun. It all went by very quickly.”

Another roller, Meera Joshi ’20, noted how much she enjoyed her experience.

“It was super fun and I loved it,” she said. “I felt it was important to go because Foss is such an integral part of every student’s campus experience and to be able to come together as a community and roll down Foss for a common cause felt kinda uniting. And also because it’s fun rolling down hills.”

Anne Snyder, too, noted the event really built a sense of community.

“Everyone was working together for this big, fun goal,” she said, laughing. “It didn’t take any skill. Except it did take a little bit of daring.”

Emmy Hughes can be reached at ehughes@wesleyan.edu or on Twitter @emmyughes.