“Riverdale” is Back in All Its Soapy Glory

Warning: this review contains mild spoilers for season 1 of “Riverdale.” 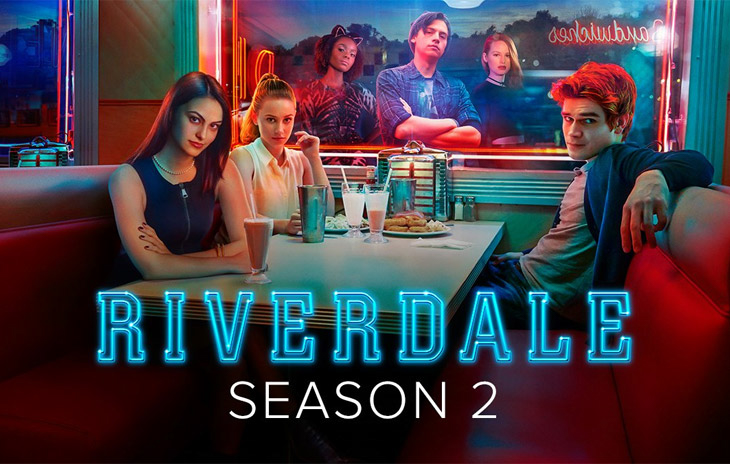 “Riverdale,” the CW’s splashy adaptation of the wholesome comics about the students of Riverdale High School, returned to television last month. The show’s inaugural season proved surprisingly popular despite its bizarre premise, and so far season 2 is shaping up to be a worthy sequel.

The first new episode of “Riverdale” begins exactly where last season’s finale left off—with the shooting of Archie Andrews’ (K.J. Apa) father Fred (Luke Perry) by a mysterious masked man. The story only escalates from there, adding class tensions, gang violence, a potential serial killer, and the arrival of the sinister, powerful Hiram Lodge (Mark Consuelos) to the already lengthy list of problems plaguing the citizens of Riverdale. It’s a lot of plot for one show to handle, and certain storylines require a sustained suspension of disbelief—at one point, Archie forms a literal militia of teenage boys whose only priorities seem to be vigilante justice and gratuitous shirtlessness—but this unapologetic commitment to drama and excess is a big part of the show’s appeal of “Riverdale.” This is a show that understands that its basic premise—a “gritty” reboot of a comic book aimed at 13-year-olds—is inherently absurd, and it works best when it embraces that absurdity. As far as I’m concerned, the more plot twists, the better.

The plot, though, does have one major weak spot, which also happens to be its most obvious change from the past season: its increased focus on Archie Andrews. Despite being the ostensible protagonist of the show, season-1 Archie was relegated to the more boring storylines, such as his attempts to pursue songwriting, his illicit but ultimately dull relationship with his music teacher, or his father’s business’s financial struggles. Until the final episodes, he was only tangentially involved in the show’s core mystery: that of who murdered Jason Blossom. This season, it’s clear the show’s creators want to bring Archie closer to the action, as the first few episodes focus on his response to the shooting of his father and his increasingly desperate search for the man who did it. I made my feelings on the bland, clueless Archie clear last season, and although his drive to protect his father does help to humanize him somewhat, he remains, for the most part, a sexy milquetoast whose plotlines threaten to veer into after-school special territory—such as when he tries to cope with his feelings by turning to drugs. K.J. Apa does a serviceable job portraying Archie’s fear and anger, but it remains to be seen whether the character can hold his own among his more complex and fascinating peers.

Outside of plot, “Riverdale” has still managed to retain many of its best characteristics from season 1. It remains as visually impressive as ever, with the costumes, set design, and cinematography of much more highbrow television. The show is full of dim lighting, flickering neon, slightly anachronistic clothing, and heavy fog, which manage beautifully evoke a noir setting without resorting to the shaky handheld camerawork that has become a cliché among gritty murder mysteries.

The show also continues to pay loving homage to its crime and horror inspirations, and fans of either genre will find plenty to appreciate this season. Cheryl Blossom (Madelaine Petsch) is a gothic dream, striding around in billowing white dresses and delivering sinister threats to her bedridden mother. Hiram and Hermione Lodge (Marisol Nichols), who are constantly having tense conversations in an elaborate mansion surrounded by Catholic imagery, look like they stepped straight out of a mafia movie. Jughead Jones (Cole Sprouse) resembles an extra from “The Outsiders” more and more each week, as he gradually becomes embroiled in the dangerous world of the Southside Serpents.

Despite all that “Riverdale” has to offer, I doubt I would keep coming back were it not for one thing: In the end, the true heart of the show is not Archie’s romantic tribulations, or his increasingly unhinged search for his father’s shooter, or anything about Archie at all, but rather the friendship between Betty Cooper (Lili Reinhart) and Veronica Lodge (Camila Mendes). Both characters have found serious romantic interests (though neither guy, frankly, deserves them), but they continue to prioritize and support each other through relationship problems, terrible parents, and the constant threat of being unexpectedly and brutally murdered. Healthy female friendships are depressingly rare on television, but the one between Betty and Veronica is one of the most honest and emotionally resonant aspects of “Riverdale.” Through all the theatrics, it keeps the show grounded.