An Intergenerational Investigation: Sarah Gancher’s “I’ll Get You Back Again” 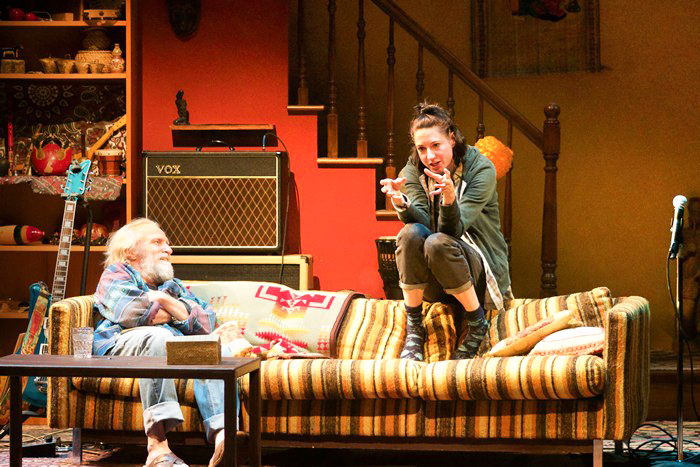 In Sarah Gancher’s new play “I’ll Get You Back Again,” the spunky Chloe asks her uncle Carl, “Are you on Twitter?” At first he replies, “No, no, I’m clean.” Soon he backtracks, stating that he does know what Twitter is, and that it was only a clever deadpan.

Hilariously messy confrontations like these make Gancher’s new play at once decidedly funny, while also, like its characters, a little scattered, constantly bridging the gap between confusion and clarity, past and present, comedy and drama, and the absurd and the profound.

The play premiered at the Round House Theater in Bethesda, Maryland, running through October under the direction of the Tony Award-nominee Rachel Chavkin. It follows the reunion of The Pisces, a fictional rock band that once hit it big in the 1960s, but never big enough to have a real legacy or influence. Their involvement in the band is the only thing tethering these characters to each other anymore—they’ve all gone off in wildly different directions since The Pisces painfully dissolved due to artistic differences and the death of their former bassist, Jimmy. Until now, that is, when the group reunites for a reunion concert in the present day.

Lead singer Coyote Dan (Dan Manning) is bearded, big, and ready to party. He’s still holding onto a dream of a reunion tour so he can reclaim the star status that has been denied to him since the band broke up, but for now he’s comfortable playing center stage at state fairs. More successful is the drummer, Melvin (Michael Anthony Williams), who transitioned his career into an intellectual meditation on jazz, landing him a professorship and thus enough economic privilege to obsess over an organic diet. Not doing well at all is the guitarist Carl (David Patrick Henry), who starts out the play having convulsions on the couch. Is he having a stroke, an awful nightmare, a vision of the past, or a drug-induced trip? The answer could be any of those, or more scarily, maybe all of them at once. His mental and physical health are rapidly deteriorating, and the reunion concert is an attempt either to jolt him back to life or to send him off with the one thing he truly loved: his music.

What about the bassist? Jimmy, played by Brian Reitman, does appear. He enters as a youthful version of himself during flashback scenes, since he will always be remembered, and trapped, in his twenties. But reluctantly playing the actual bass guitar for the concert is Jimmy’s daughter, Chloe (Renata Friedman). Chloe is a struggling insult comic with the inquisitive, nasally tone of Sarah Silverman. At 37, she’s of a different generation than that of those she’s surrounded by, and observes her father’s friends with curiosity, the emotional distance caused by grief over the loss of her father gradually melting into connection with the other characters. But the relationship between Chloe and the rest of the ensemble highlights the connection, and divide, between generations. For the most part, the Pisces band members still believe in the future as predicted by hippie-rock musical “Hair:” an Age of Aquarius where the world comes together in a rapturous understanding. For Chloe, this was a delusion her parents couldn’t shake off. She’s even dismissive of her own generation’s countercultural trends, opting to pay her bills instead of embracing the bohemian lifestyle.

In positioning her characters as a way of tracing the progression of American counterculture movements across generations, Gancher’s thematic ambition and scope is epic. There are some intriguing dialogues and arguments being developed here, most potently the suggestion that the counterculture movement of the 1960s ultimately failed to enact any lasting change, as represented by these washed-up musicians who gave into personal fighting and never created a true impact on either their culture or the way they lived their lives. It also asks what counterculture means in the Trump era. Particularly incisive is a furious rant delivered by Chloe in the second act, questioning the entire concept of revolution itself. What happens when parts of your generation’s Fight Against the System movement (which includes factions like the “alt-right”) leads to the devastating events that killed Heather Heyer in Charlottesville?

It’s somewhat promising, even cathartic, to see a play talking specifically about the current political moment. The modern lingo employed by the entire cast of characters can also be immensely funny, especially since it’s even employed by this older generation of musicians. Gancher finds a strange but hilarious discrepancy between the discourse of modern progressivism and the 20th century’s New Age spiritualism. There’s talk of “micro-aggressions,” “colonialist mentalities,” and “architectures of oppression.” These are the kinds of conversations you hear around the halls of academia or from college students over coffee—to listen to these phrases coming out of the mouths of aged rockstars is at once cringey and endearing.  If anything, the actors have the comedic chops to bring these lines to life. As Coyote Dan, Manning is an uproarious and dominating presence. And as the professor Melvin, Williams perfectly embodies a “woker-than-thou” mentality. But it’s Friedman’s performance that is most memorable. Anxious, confused, and aching for connection in the character of Chloe, Friedman captures a realistic, if tragic, encapsulation of people inhabiting the spaces of both angsty youth and weary adulthood.

If the play’s ambition to sprawl over many dialogues is one of its best parts, it’s also what keeps it from crafting a focused narrative. There’s a lot of terrain to cover within the nearly three-hour running time, and folded into the script are even more questions: what is the difference between selling out and achieving success? What is the connection between the mind and the body? Between comedy and music? Or between moments of deep profundity and just people tripping out on drugs? Any one of these could be the centerpiece of its own play, but here the questions bleed into each other, not necessarily forming cogent responses to any of them. There’s a gap between the intellectual discourse being spouted by the characters and the emotional story of how a reunion concert slowly undermines and dismantles itself. It becomes clear by the end that the show’s emotional center lies in the relationship between Chloe and Carl. It’s a heartfelt uncle-niece relationship, bridging the two generations together, and providing an affirmation of their shared histories. However, their final scene together seems to arrive almost circumstantially, not as the culmination of the entire play.

This touching relationship is stuck within a play that is perhaps dealing with too much. Aside from the complex group of questions posed by the show’s central premise, there are prominent subplots around Shemp, a song-cycle written by the band about a mystical fourth member of the Three Stooges, and Tulip (Helen Hedman), Chloe’s sexually liberated mother who goes on her own romantic journey. Despite that these storylines take up huge chunks of the play, they are wholly unnecessary in answering the primary questions the show is exploring.

This is only exacerbated by the fact that there are characters who could also be fleshed out more with more time. As the only character of color within the ensemble, Melvin carries the burden of token representation. He’s by no means a prejudiced or harmful representation of black masculinity. In fact, he’s the most emotionally secure out of the whole lot, and possesses an incredible ability to state his convictions through college lectures: he has his manifestos down. But like Belize in “Angels in America” (Tony Kushner is a stated influence), a black nurse who in essence heals all her co-characters, Melvin’s striking independence and goodness robs him of the interiority and despair explored in the other characters. Also under-utilized are the younger versions of Melvin and Dan, portrayed by Jonathan Livas and Harrison Smith, respectively. If Gancher is going to physically actualize the past selves of these characters so far as to cast more actors, why not seize the opportunity to use them more? My only guess was that these were roles written purposefully for musicians, not actors, since we primarily only hear live music when they’re onstage.

But despite its fraught narrative, “I’ll Get You Back Again” elicits thoughtful, uniquely theatrical questioning into the lives of the play’s characters and audience. This has to be the achievement of the director, Rachel Chavkin, one of the most versatile directors working today. She previously directed “Small Mouth Sounds” (now on a national tour), a small play set in a silent meditation retreat. She also directed Broadway’s “Natasha, Pierre, & The Great Comet of 1812,” a completely sung-through musical spectacle whose production played upon all the senses, including smell and taste (the latter two thanks to pierogies being served before the first act). She’s also currently workshopping a musical adaptation of “Moby Dick,” and her other musical “Hadestown” is having an out of town tryout eyeing Broadway.

Chavkin’s eye for collaborators outside of mainstream theater is impressive. But it’s her innate sense of audience interaction, pulling us along into the infectious joy of her shows, that threads the patchwork of her eclectic career together. When you’re at one of her shows, you’re at once transported into an entirely different world, and launched into a deep exploration of your relationship to that story. She creates environments that are both sweeping and intimate, and her influence on “I’ll Get You Back Again” heightens the emotional stakes of the show. Particularly impressive is the set (designed by Carolyn Mraz), a puzzle-box house of records, posters, and memorabilia whose turning continually reveals new information. Jared Mezzochi’s projections interact with this set in neurotic, playful ways and reveal dimensions to the mental states of the characters. Chavkin’s background in musical theater is powerfully present: the complex soundscape of the show, which ironically includes little music, still finds its ways to be deeply impactful.

In “I’ll Get You Back Again,” characters are always stating they’re “on the brink” of something great, whether it be absurdity or revelation. The same could be said of the show itself. Perhaps it’s on the verge of cracking into the psyche of American politics and the way that our past shapes, and controls, our future. Or perhaps it’s a show with a lot of promising ideas that still needs to take its time refining and refocusing its concepts. Maybe it really is both at the same time. Yet under the direction of Chavkin, these contradictions become more fascinating than repelling. It’s difficult but illuminating to see Gancher trying to pull off a political statement about America and not form an entirely a satisfying resolution. Maybe that’s just where we are in 2017. But it’s fantastic to stay within Chavkin’s exuberant groove for a few hours. Hopefully, more audiences will get to live in her entrancing rhythm in the future.

Nathaniel Pugh can be reached at npugh@wesleyan.edu.