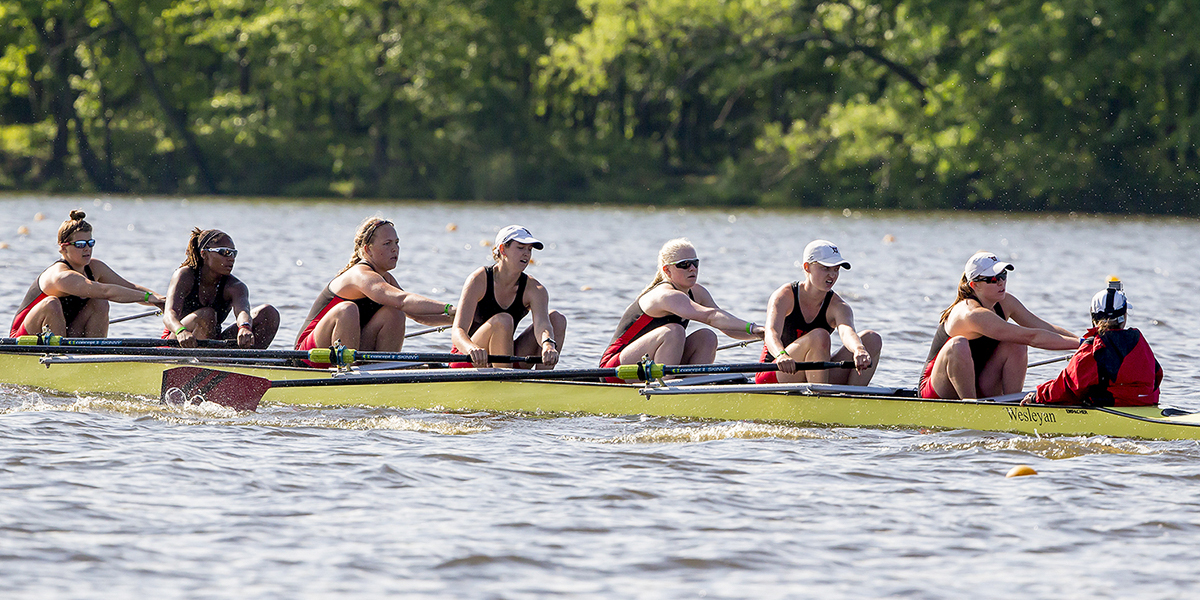 But in order to even be prepared for races, both teams have been hard at work in the gym and on the water, early in the morning and late in the day. It’s no surprise, then, that at the Head of the Charles Regatta, one of the most famous regattas in the world, the women’s crew was just a bit quicker than the rest of the competition.

The Head of the Charles, which ran from Saturday, Oct. 21 to Sunday, Oct. 22, is a head race, a time trial between boats for three miles down a winding river. As a result, it’s very difficult for one boat to judge its relative position to other boats, a lot of weight rests on the coxswain’s ability to set the race. In addition, coxswains must correctly navigate the boat down the twists and turns of the river; finding the most efficient angle for a boat as it travels around the corner is often crucial to a top result.

On the Charles River, which snakes through the center of Boston, the first boat for the women’s team rowed to a strong second place in the Women’s Collegiate Eights division with a time of 16:18.045, just 17 seconds behind Bates, who took first place. Even after last year’s first place at the Regatta, the Cards second in line was still a very respectable result, considering they overcame NCAA Division I schools such as UC Santa Barbara and the United States Military Academy at West Point. Because the team won last year’s race, they started first and therefore didn’t have any boats to pass nor to use to judge their relative position.

“…It was crucial for us as a boat to stay internal; stay focused on our strong rhythm and drive,” Allison Quintana ’19 said. “With that, it was important that we also remembered to just keep pushing as hard as we could the whole time because we couldn’t see other boats and didn’t know what those crews were doing that had started after us.”

In the Women’s Collegiate Fours division, the Red and Black were a little less successful, taking 14th place with a time of 19:04.063 against tough Division I schools like the University of New Hampshire and Lafayette College, who claimed first and second place respectively.

The men’s rowing team also competed in the Head of the Charles but was slightly less prosperous than the women’s team. In the Men’s Collegiate Eights division, the Red Birds reached 17th place in 15:00.457, also competing against top Division I schools such as the University of Virginia and Saint Joseph’s University, who rowed to first and second place respectively.

The following weekend after the Head of the Charles, Saturday, Oct. 28, both crew teams traveled to Saratoga, N.Y. to compete in the 2.3-mile-long Head of the Fish. Perhaps upset at their second-place finish in Boston, the women’s first boat made quick work of their competition in the Women’s Collegiate 1V Eight division, taking the crown in 12:9.44. The second varsity eight was just as motivated, also finishing at the top of the Women’s Collegiate 2V Eight Division in 12:34.23.

The Head of the Fish marked the end of the fall season for the Cardinal rowers. But practice on they must, for the rest of their competition will be doing the same in preparation for their grueling spring season. However, NCAA regulations prevent coaching staff from running practices, and so senior captains must lead them instead.

“We won’t be out on the water, but we will be on land on the ergs (rowing machines) a lot, lifting multiple times a week, and doing other forms of cross-training,” Quintana said. “The winter is the perfect opportunity for us to train hard as a team and get into fantastic shape to be ready for the 2000-meter sprints in the spring.”

And there’s no doubt that even with the strength and fitness of the Cards now, there’s more work to be done, especially on the psychological side.

“Beyond the fact of trying to be physically stronger than your opponents, a very equal aspect of rowing is the mental prep,” Makail Crawford ’20 said. “It’s easy to lose focus on a goal, especially in the middle of long winter training. The mental aspect is way more difficult than the physical, but it’s just as necessary to be successful.”

“From being nervous and anxious before a race to being in the race and wondering if your body can take any more, crew really comes down to how much mental toughness an athlete has,” Quintana said. “We are all unquestionably so fit from training hard all year and are such strong women. So during the last 500 meters of a race, when you feel like you have nothing left to give, it is key that you trust yourself, your fitness and your teammates and tell yourself that you do have another gear.”