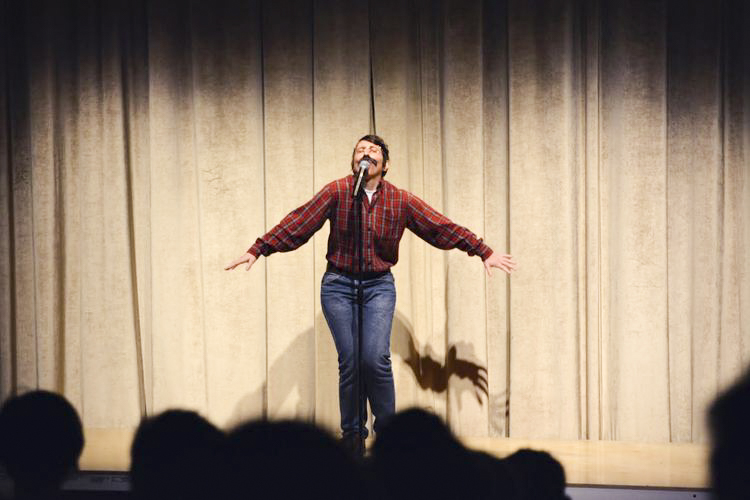 Yanow’s Cherie is an “odd bird,” both literally and figuratively: she is a queer Borscht Belt showgirl, an object of fantasy and desire, the persona that Yanow imagines her grandmother yearned to be, and a radically seductive bird. “Cherie Dre” is alternately set in Yanow’s grandmother’s bedroom and a resort in the Catskill Mountains in the 1950s. This resort is one of many comparable sites of escape and vacation for American Jewish immigrants; it is also where Cherie performed and performs.

Yanow narrates “Cherie Dre” through her grandmother, but since it is a one-woman show, she moves into and out of other characters. She becomes Cherie Dre, resort employees, and, eventually, federal government agents who may or may not be trying to indict Cherie of espionage. Additionally, “Cherie Dre” is structured around the affective states of bipolar disorder, a mental illness that her grandmother struggled with for much of her life. The performance can be understood as a set of affective movements from elation to paranoia to depression.

“Cherie Dre” is currently a work-in-progress, but Yanow has already succeeded in a constructing a powerfully multi-layered performance. By telling Cherie’s story through her grandmother, Yanow simultaneously channels and explores her maternal lineage, Jewish American history, and her own personal experiences. She imagines remembering, remembers imagining, and performs both of these processes in tandem. And if it sounds like a gimmick or a mockery of postmodern meta-narration, it’s not—Yanow is sincere in her attempts to confuse fantasy, desire, and memory across temporal frames and subjective points of view.

Before her performance, Yanow agreed to sit down with The Argus to discuss her artistic practice and “Cherie Dre.”

The Wesleyan Argus:  Did you research your dad and grandmother for Dad Band and Cherie Dre, respectively? How did that differ from other types of research you might do for a performance?

Sacha Yanow: So far all of the work that I’ve made has had autobiographical elements to it, so in that sense there’s always a kind of mining of myself and my own history, while thinking about it in relation to larger social histories around me or that I am within or affected by. In some sense both Dad Band and Cherie Dre are in that trajectory of my work, but they’re definitely the most full incarnations of that and the most direct naming of that [process]. In terms of the difference between those two, Dad Band is much more of a portrait of my actual dad and the dad inside of me and my understanding of myself in patriarchy in general from piecing together what I knew about [my dad] growing up. Cherie Dre definitely has those elements of piecing together what I know about my grandmother from my mother and her brothers and my family, but it’s not a direct portrait of her. It’s me riffing on this fantasy alterego of hers, and also honoring many of the women in that generation of my family. [Cherie Dre] is also modeled after my great aunt Florence who was a dancer and singer and showgirl, and it’s really telling a social history at the same time, or it hopefully will at some point when I finish it. So in that sense it’s not as direct of a portrait as Dad Band was, even though Dad Band wasn’t super direct as a portrait in and of itself.

A: Something else that I’ve been thinking a lot about in relation to your work is celebrity. How does celebrity fit into Cherie Dre specifically or other works of yours?

SY: When I first heard about my grandmother having this alter-ego I thought, where does this desire come from? Where is she seeing this and what does she want? I’m sure it was influenced by live performers she saw but [also] by movies from the 30s that she must have grown up with or seen. I think this is what we do to all celebrities. We fantasize, we imagine that we are them.

A: Is there maybe some relation between celebrity and who we celebrate publicly or what types of people we celebrate?

SY: Definitely, that’s where my brain was going.

A: There are all these social cleavages that surface in Cherie Dre.

SY: Yes, even from the music I’m choosing. It’s the Barry Sisters, who were a Yiddish pop duo who used to be called the Bagelman Sisters, but changed their name. When they got a certain level of mainstream success they changed their name to the Barry Sisters so they would be more palatable to non-Jewish audiences. I was also thinking about the Borscht Belt. The celebrities that are most famous coming out of the Borscht Belt are Lenny Bruce and all these men, mostly male comedians. I had to really look for where the women were and where their history is recorded. Then I was thinking about the histories of people like my grandmother, who were not famous, were not performers. What do they leave?

A: What did she leave? What were some of your sources? How did you go about that research?

SY: So I did know my grandmother, but I knew her when she was in her seventies and was very medicated. I didn’t know her very well, and she actually seemed kind of scary to me as a young person. My mom hardly talks about her mother, but certainly her mother was a presence in my relationship with my mother because of the way she sort of reacted against it. The stories that I start to hear about my mother’s childhood are, to me, very devastating to hear. I know that that melancholy and her history is definitely in there, so I’ve been trying to very delicately ask [my mother] more about [her mother] and ask her two siblings, who actually seem more free to talk about it than she does.

A: Does she know you’re working on this project?

SY: She does. She knows about this project and she actually came to see a showing of it in the Catskills. We’ve been in dialogue about it because her reaction was like, “Well that’s not my experience of your grandmother. That’s not your grandmother.” I think she might’ve been thinking of it like Dad Band. My dad was distant growing up, but he was there and I knew the shirts he wore and I knew his shoes and his mannerisms and his habits. With my grandmother I didn’t know that, so it’s a process of getting to know her. I’m not trying to literally be my grandmother. My uncles didn’t have the same reaction [as my mom], but my mom was really bracing to see her mother, and she didn’t [ultimately] see her mother the way she sees her mother. This stuff is so complicated and still in process.

A: You have described this piece as a type of collaboration with your grandmother, and I’m really interested in how you see this as a collaborative work even though it’s a solo performance.

SY: It’s difficult to know how Cherie Dremond, which was her full name, came to be, but it was definitely my grandmother’s fantasy. I don’t know if my grandfather also played into that [fantasy] with her and gave that name to her. I’m not sure if that was part of somebody’s story of this history. But I struggle with fantasy myself, and struggle with desire. I’m not sure if the word is struggle, but I have fantasies and desires, so I feel like I’m trying to talk about my stuff with fantasy alongside my grandmother’s stuff with fantasy, and the best way I know how to do that is to collaborate with her on this idea of Cherie Dre.

A: Or somehow move outside yourself to do that?

A: I saw a clip of yours from The Prince and I was interested in how you might connect fantasy in that performance to fantasy in this one?

SY: Fantasy has been a big part of my growing up as a child actor. It’s been very debilitating to me at many times in my life and very destructive to me at many times in my life. Specifically in Cherie Dre right now I’m also thinking about fantasy in terms of desire and sexuality and femininity. A lot of what Cherie Dre is about for me is coming into sexuality and queerness. In the piece right now, you’ll see, there’s a lot of lesbian bird erotica, and people are like, “Oh my god, was your grandmother a lesbian?” And I’m like, “Actually I don’t know, she could have been a lesbian. I don’t think she was a lesbian.” So I’m working on trying to collaborate with her.

A: So maybe the object of fantasy is a difference between The Prince and [Cherie Dre]?

SY: The Prince was much more autobiographical in the sense that I was trying to deconstruct a role that I either gave myself or was given. Often how I would get out of that role of performer would be to put it on someone else to sort of save me from it, which is a lot of fantasy. So there’s fantasy put on me, then I put it on someone else, and then I tried to figure out through the end of The Prince how I might stay in reality. [Cherie Dre] does have echoes of that.

A: Something else I’m thinking about is the status of Cherie Dre as “in progress.” When is something like this done?

SY: Good question. Right now I have this story that is primarily in text, but because this started as an installation in Portland I have so much ephemera from the hotels in the Borscht Belt and also from my grandmother and family. And I have all this rubble that I stole from hotel sites, and I have beautiful footage of wild flowers.

A: Was it all part of the installation?

SY: Some of it was, but some of it was collected during this residency that I had in August at Denison Hill, which is literally in the Borscht Belt in the Catskills, which was amazing. I was trespassing through all these hotel ruins and meeting a lot of people in the area: local historians, town supervisors, people who were waiters. Everybody has a relationship with the old hotels. Basically, right now the piece is about thirty minutes of material, and it tells the skeleton of the story, but now I’m going to have another work phase where I’m just going to open it up and disrupt it through some of the more abstract elements, such as movement or visuals. I’m going to add to the story a little bit more, especially her mental state. The story is going to be told more through visual design and movement, but what I have now is the text. There will be a premiere of it next fall.

A: Did you always intend for it be a performance…or was it initially intended to be [an] installation?

SY: I always intended for it be a full evening performance, and then the invitation in Portland came for me to create an installation from it, which is a beautiful way that the universe has shown me what this piece is because now all these sculptural and visual elements feel like they’re part of it. So now I have those things and the performative part of the piece. I always imagined it as a full evening performance, it’s just been a hodgepodge of what’s come together first.

This interview has been lightly edited for clarity.