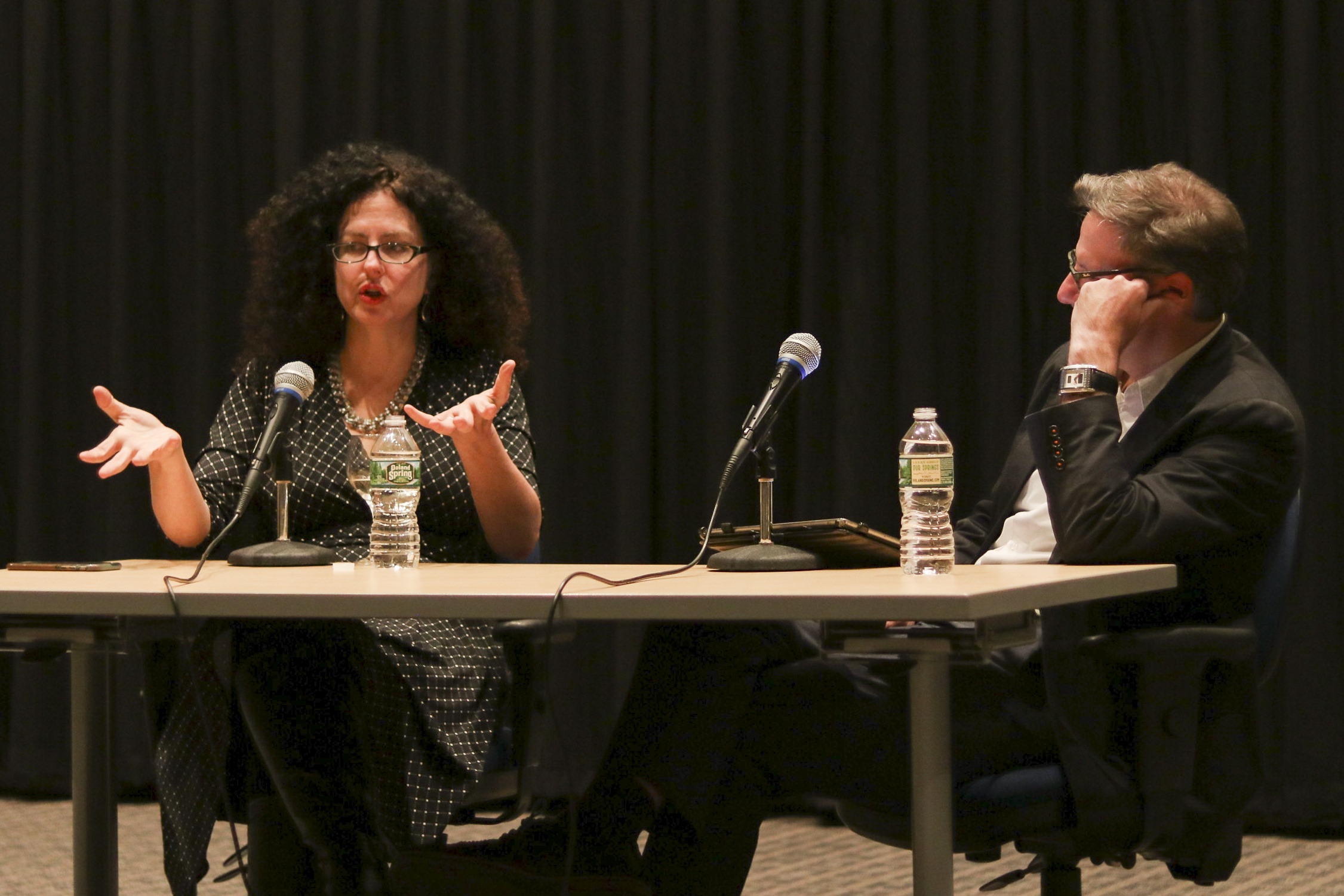 On Tuesday, Oct. 17 at 8:00 p.m., the Center for Film Studies hosted “A Conversation with Emily Nussbaum” in the Goldsmith Family Cinema. Emily Nussbaum is the television critic for “The New Yorker,” and won the Pulitzer Prize in 2016 for her criticism. Charles W. Fries Professor and Film Studies Chair Scott Higgins moderated the event.

The conversation began with Nussbaum’s thoughts on Twitter, with Nussbaum stating she now appreciates the platform despite initial doubts. Higgins and Nussbaum then delved into the history of and attitudes toward television. Regarding the latter, Nussbaum expressed her desire to approach the medium in its own right.

“I have a mission as a TV critic,” she said. “I want to write television as television. I want to detach it from constant comparisons to film and books, which are mediums that people respect and admire and talk about as art.”

Nussbaum targeted attempts to judge the medium by the standards of film, and in particular lamented the use of the word “cinematic” in TV criticism.

“I have this whole thing about the overvaluing of things in television that resemble things in movies, and one of them is the sense that if a show has incredibly ambitious visual things going on, that means the show is ambitious, adult, and all that,” she said, “And there are shows that look great and are empty. [I’ve tried to] kind of topple down this false status pyramid that has to do with people being anxious about what seems most ‘television.’”

Higgins then transitioned to a possible difference between the two mediums. No matter how many times he re-watches a movie, he recalled, the movie is more or less the same. On the other hand, he suggested to Nussbaum, much of a television show’s appeal depends on its happening “right now.” In other words, the buzz and social experience surrounding a TV show affect its meaning.

Nussbaum agreed in part but insisted that changes in technology have since injected a new sense of permanency into the medium.

“When DVRs were created, TV became a text,” she said. “[When DVD and streaming services followed], the notion of TV as something that happens and then gets discarded has really altered.”

Higgins and Nussbaum then honed in on the late ’90s as a pivotal moment for the medium, not just in terms of technological advancements like TiVo and cable.

“There definitely was a thing that happened in the ’90s, …[there were indications] that you could do something else with storytelling,” the critic said.

She then rattled off the power players which contributed to this impression: “The Sopranos,” “Seinfeld,” “Sex and the City,” and “The West Wing,” among others.

Nussbaum responded with enthusiasm. “Buffy the Vampire Slayer” was the first show of which she was a self-proclaimed superfan, she would later recall.

“My big problem was the Buffy-Sopranos problem,” she continued. “Because everybody was talking about ‘The Sopranos’ and nobody was talking about ‘Buffy.’ ‘The Sopranos’ was cinematic. It was masculine, it was violent, it was an hour-long drama, it was on HBO. And ‘Buffy’ was on the WB, and it combined all of the genres that people think of as the degraded genres, or the pleasure genres, and the feminine genres…. It’s the teenage girl versus the middle-aged man. I do think that that was the beginning of a problem in the conversation about television.”

After thirty minutes of back-and-forth with Nussbaum, Higgins opened the floor to audience questions.

In response to one question about the notion of “cult TV,” Nussbaum pinpointed “The Wire” as the phenomenon’s origin.

“[David Simon told me that he] relied on the fact that people would decode [‘The Wire’] online,” Nussbaum said, recalling a profile she wrote on the show’s executive producer and head writer. “Mass audiences are [now] baked into the storytelling. The reason you get density and complexity is that you have obsessed people trying to decode things.”

Nussbaum discussed “Orphan Black” and “Sense8” as a contemporary progeny of Simon’s model, and ABC’s “Lost” as a failure.

“Lost” received flack for a perceived plethora of unanswered subplots and for the impression that its writers were making up the plot as they went along. To Nussbaum, the relationship between the show’s writers and its audiences went awry.

In a later question and answer discussion with Nussbaum, an audience member posed the question, “As a critic, when horrible people make great art, how do you walk the line?”

Weeks prior, The New York Times and the New Yorker published accounts from prominent actresses accusing the Hollywood mogul of sexual harassment, assault, and serial predatory behavior. Since the initial story broke, more accusations of sexual misconduct have followed, not only against Weinstein (there at least 50 allegations against him as of writing), but now against other high-profile men in positions of power in Hollywood, such as director James Toback.

“My basic philosophy on this is that I do separate the artist from the art,” Nussbaum responded. “And the reason I have to do this is because Woody Allen is extremely important to my development.”

Allen’s adopted daughter Dylan Farrow has accused the prominent filmmaker of sexually assaulting her at age seven and exhibiting other sexually predatory behavior throughout her childhood.

Nussbaum recounted consuming and enjoying a host of Woody Allen content throughout her young adulthood. Allen’s films, she said, have greatly influenced her thinking and writing.

“I still think those movies are good,” she said of his work.

Nussbaum expressed similar views on Bill Cosby in relation to “The Cosby Show,” the ’80s sitcom which broke barriers for its positive portrayal of an affluent African-American family. In the fall of 2014, accusations against its creator Bill Cosby achieved a critical mass; his public reputation has since been tarnished. (Allen’s career, on the other hand, remains intact. He has a new film, “Wonder Wheel,” coming out in December.)

“I don’t think the Cosby show should go off the air,” Nussbaum said, alluding to late 2014, when networks cut the show from syndication. “It was the big, big breakthrough in terms of racial representation…. I just don’t like the idea of things being erased from artistic history because the people who made them did awful things.”

“What do you do?” she responded the audience member who asked her about horrible people making great art.

“Buffy the Vampire Slayer” came up once again, though this time in the context of separating a “horrible” artist from their art. The audience member expressed unease with the series in light of recent allegations leveled against Joss Whedon ’87. The show had made the audience member fall in love with television.

“Me too,” said Nussbaum. 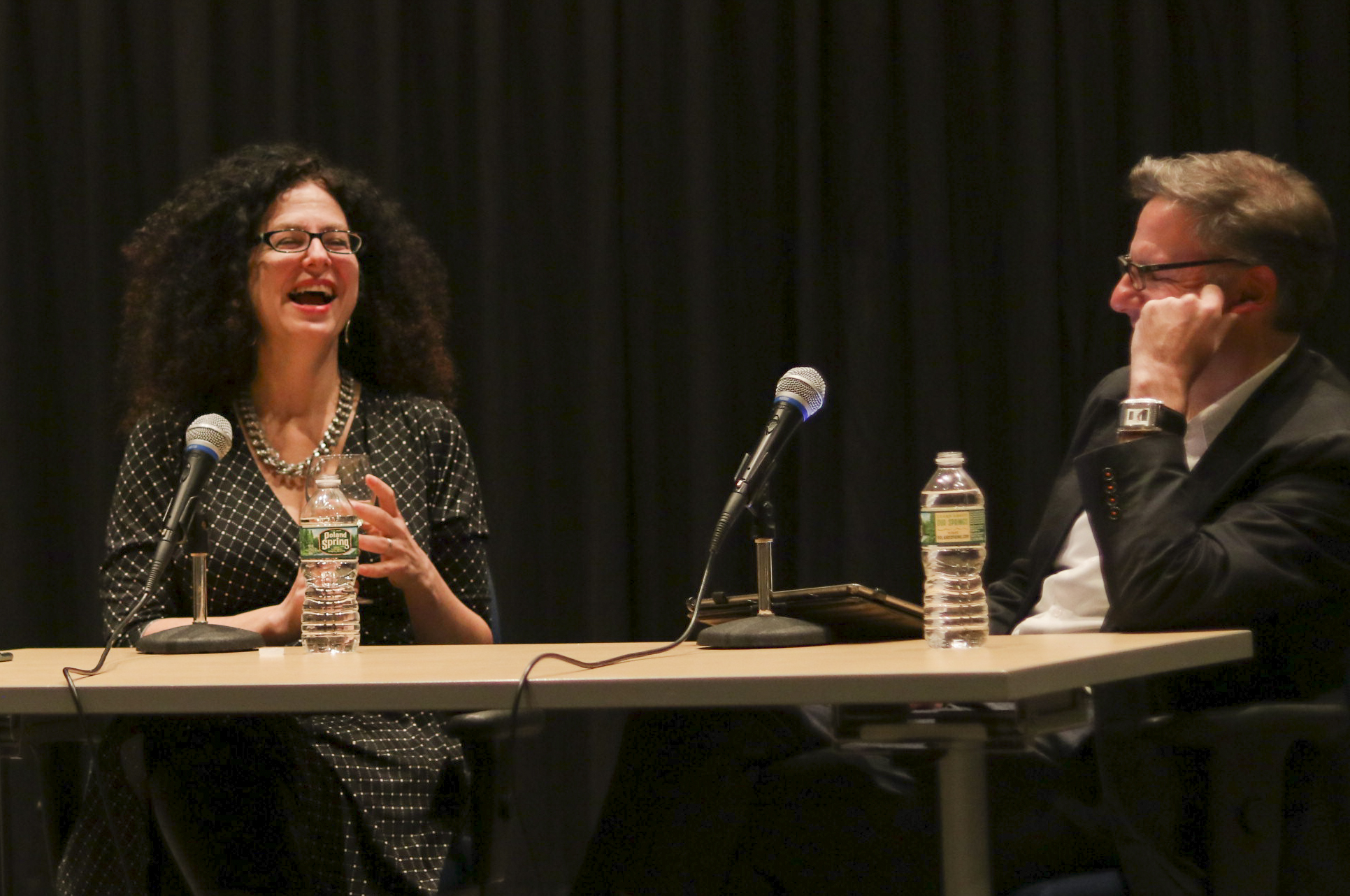 In August, Whedon’s ex-wife Kai Cole publicly accused him of infidelity, including affairs with actresses and coworkers, as well as emotional abuse. A spokesperson for Whedon responded to these claims.

“While this account includes inaccuracies and misrepresentations which can be harmful to their family, Joss is not commenting, out of concern for his children and out of respect for his ex-wife,” the spokesperson stated.

Before the discussion’s conclusion, audience questioning moved Nussbaum to the topics of sexuality and race, and to particular works like “Angels in America” and “Scandal.”

“‘Angels in America’ completely changed my life,” she said of the HBO miniseries, adapted from the stage play. “[It] made the case that you could artistically use gayness and gay male history and gay male experience as the lens in which you looked at everything in American history.”

In response to a remark that she had woven gay lingo and inside jokes into one of her pieces, Nussbaum failed to recall any examples, but credited her early involvement in gay activism for what she considers a “relative competence” in discussing LGBTQ+ issues. While living in Atlanta in the early ’90s, she recalled, she was involved in the advocacy group “Straight but not Narrow.”

Nussbaum then related the show “Scandal” to historical depictions of African Americans in television. “Scandal” is the first major network series to feature a female African-American lead in more than 40 years.

While researching to write about the recent uptick in shows featuring predominantly Black casts, Nussbaum became aware of the work that “completely unknown” supporting actor P. Jay Sidney put into changing the representational landscape of television. She briefly summarized his career.

“He was like a one-man anti-segregation TV activist for 40 years,” she said of Sidney. “He died completely unknown and basically uncelebrated. He testified before Congress. He picketed CBS. He was amazing. He basically played a million shows on television, and you’d never know who he was because he played only roles like waiters and tiny roles. He just kept trying to get more roles for Black people in television, and he basically made no progress.”

Nussbaum then used Sidney’s story as a representative example of the systemic racial inequalities Black Americans have faced—and continue to face—in television casting, production, and criticism.

“The reason he was so unknown is that there’s a set of people who are interested in Black civil rights and the history of civil rights in the United States, and they’re not very interested in pop culture and TV,” she said. “And then there’s a set of TV writers, most of whom are white, who don’t have a lot of knowledge about race, or interest, or penetrating ideas about it—including me.”

“What happens is that you have this Venn diagram,” she continued. “And certain figures don’t get covered.”

She cautioned the audience, however, by recounting that in the ’90s a similar growth of Black-led series showed initial promise but petered out by the early 2000s. She remarked that for this reason, among others, she no longer believes that social progress inevitably comes with the passage of time. She expressed doubts that the recent uptick in Black-led programming would necessarily endure.

The critic, relating these historical threads to her own writing, said she was in the process of self-educating about Black history and representation in television.

“Not because I want to write good and righteous and positive things about representation on TV,” Nussbaum qualified. “But because I can’t write anything interesting unless I know what I’m talking about.”