Layli Long Soldier Reads from “Whereas” 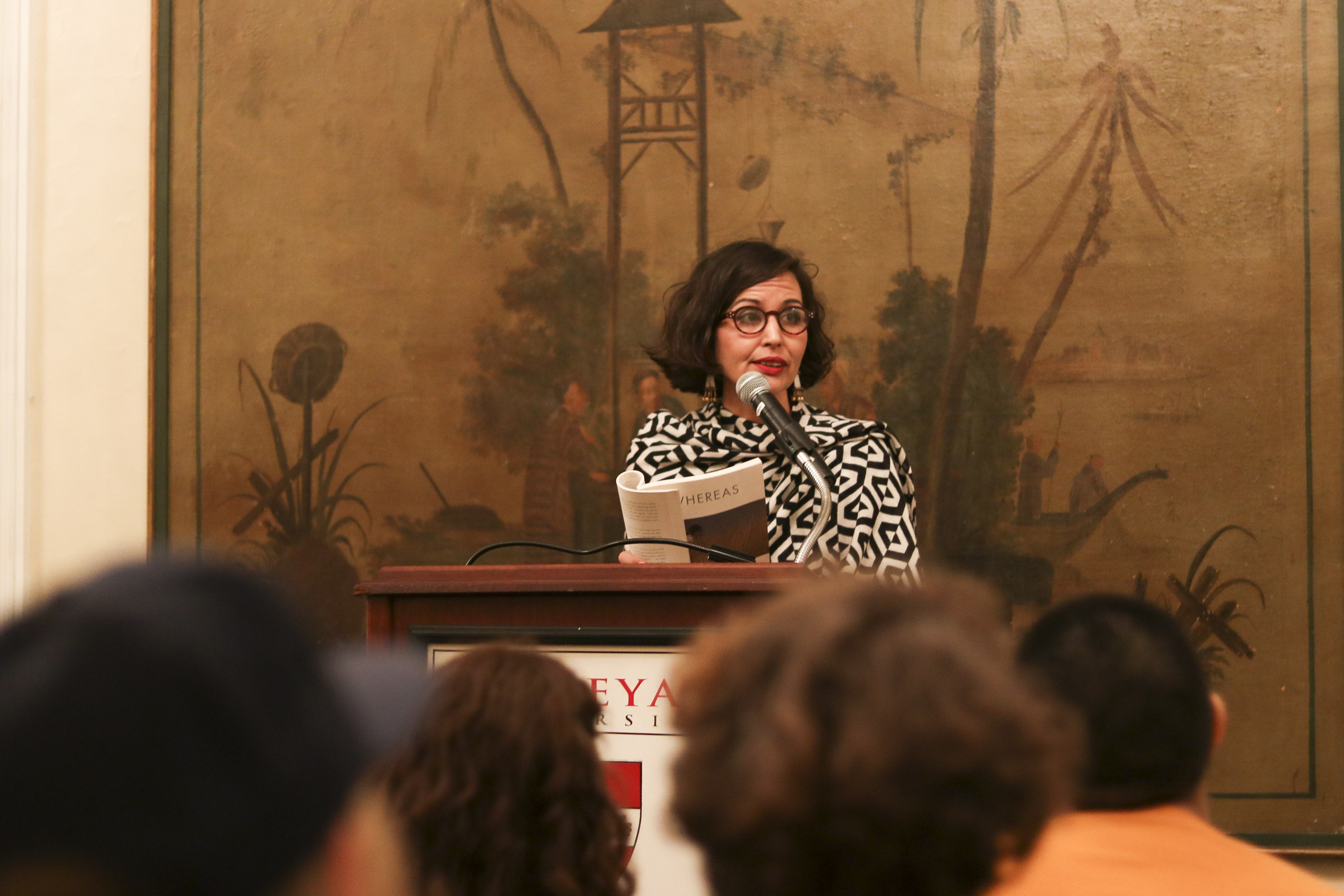 This past Wednesday, students filed into Russell House to hear Lakota poet Layli Long Soldier read from and discuss her most recent book, “Whereas,” which came out this past March.

The book is written as a response to the Native American Apology Resolution, a 2009 congressional resolution apologizing on behalf of the United States to Native Americans for the years of violence and oppression inflicted on them. During the reading, Long Soldier explained her frustration at the apology, which was quietly attached to a larger defense bill and signed without any kind of public announcement, and without informing or inviting any Native American leaders.

“I was tired of not being seen,” Long Soldier said.

Language and its use as a tool of oppression is a central theme of “Whereas,” and Long Soldier imitates the language and structure of the resolution in order to illustrate its absurdity. For instance, the book is divided into sections that match those of the resolution: “These Being the Concerns,” “Whereas Statements,” “Resolutions,” and “Disclaimer.”

The book’s eponymous poem consists entirely of statements beginning with the word “whereas,” but unlike the impersonal “whereas” declarations of the resolution, these lines catalog Long Soldier’s own experiences and frustrations as a Native woman. She writes about a man, clearly white and wholly unaware of how wrong he is, employing the repeated word to tell readers what she wished she could have said to the man.

“Well at least there was an Apology that’s all I can say,” Long Soldier writes.

At the very the end of the poem, the narrative turns to addressing the word itself and imagines an interaction between author and word:

“Whereas calls me to the table because Whereas precedes and invites,” she writes. “I have come now. I’m seated across from a Whereas smile.”

The particular word that was so frustrating to her morphs into a character, now synonymous with all the ignorance and complacency it represents.

Another poem uses the literal language of the resolution, strategically selecting certain words and phrases from the text of the bill to create an entirely new piece of writing. In poems like these, Long Soldier deftly criticizes the language used in the congressional resolution, which pays lip service to the violence committed against Natives without actually acknowledging the government’s complicity.

“My criticism is not aimed at any particular politician,” Long Soldier said. “It is aimed at a particular kind of Americanness.”

She explained that the seeds of the book began as a single poem, which she wrote as a way to find relief after days of seething about the apology and its inadequacies.

“As soon as I wrote it I felt great,” she said. “And then I immediately realized one poem would not be enough.”

Between reading poems, Long Soldier described her writing process, as well as gave anecdotes from her own life that have helped inspire her writing. In one such story, she described a college professor who repeatedly referred to Native religious beliefs as “myths” or “stories.” Struck by his condescending attitude towards Native American spirituality—especially compared to the more legitimizing way he addressed Judeo-Christian beliefs—but too timid to criticize him in front of her classmates, she called her family afterward to complain.

“My parents asked me, ‘Did you say something to him?’” Long Soldier said, describing the phone call. “And of course I had to tell them no, and they told me, ‘You have to speak up. If you don’t say anything, no one will say anything.’”

Long Soldier also emphasized the personal nature of her writing, which focuses on her own specific feelings and experiences to illustrate broader ideas about the relationship between Native Americans and the United States.

“I don’t sit down intending to speak for all Lakota people, and certainly not for all Native people,” she said. “But I think people do identify with what I write.”